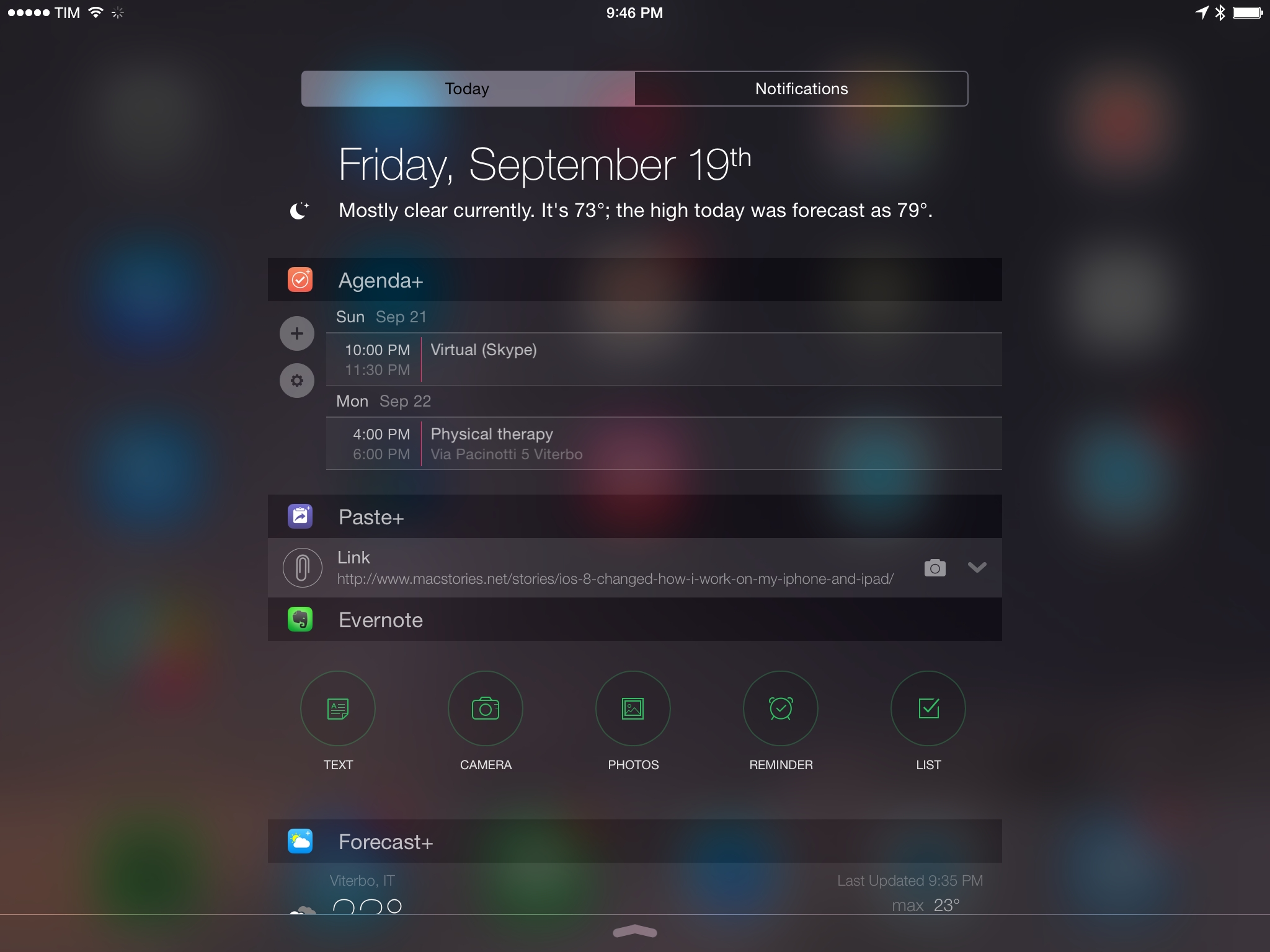 A lot of new and updated apps have landed on the App Store since the launch of iOS 8 earlier this week. While we tried to be as prepared as possible by covering notable releases here at MacStories, we couldn’t possibly hope to always have articles for every single new app we like. Therefore, I’ve decided to run down a few personal picks for new iOS 8 extensions and widgets I’m going to try over the weekend.

Due to the abundance of widgets, extensions, and custom keyboards that have been launched this week, I don’t expect all of these apps to stick around on my devices forever. Developers of apps I use every day still haven’t finalized their iOS 8 updates; others are still figuring out the best ways to implement new iOS 8 technologies.

Still, I’ve been having fun browsing the App Store for new apps. You can find the list below.

And if you’re looking for our in-depth coverage that we prepared ahead of iOS 8, you can find all our articles and reviews here, and my thoughts on iOS 8 here. 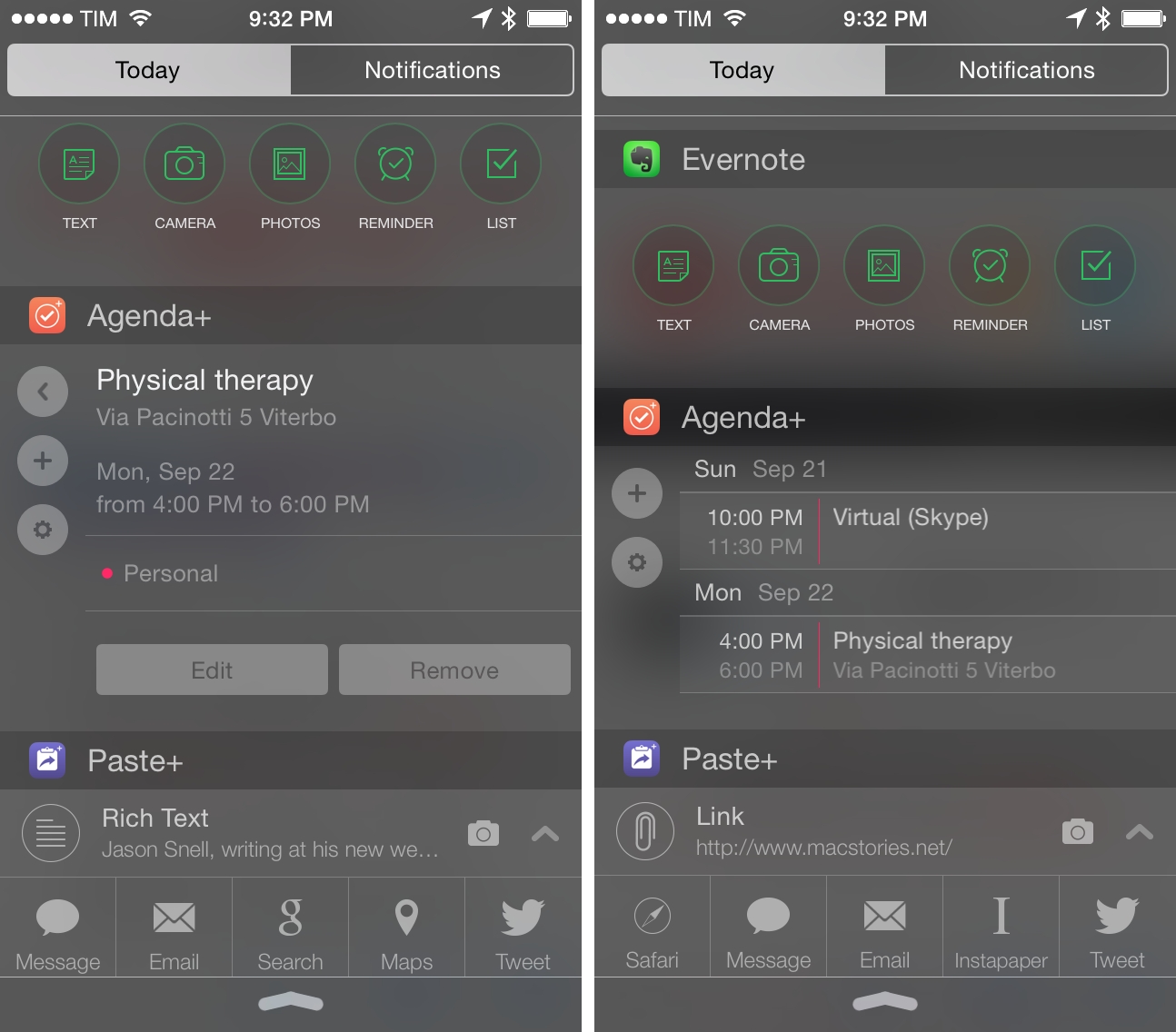 I bought these three apps through the Avanio Labs bundle on the App Store, and they provide a nice subset of functionalities for launching actions and seeing information at a glance.

Paste+ lets you configure actions for text or links you’ve copied in your clipboard. I set up shortcuts to quickly open a Google Search for text and view a URL in Safari. The choice of actions isn’t as variegate as what you’d get in apps like Launch Center Pro or Drafts, but there are no URL schemes to configure and the widget makes these shortcuts available anywhere.

Agenda+ works with the native Calendar and Reminders app. I prefer this calendar widget to Apple’s as it shows a simple list of events that are color-coded and that you can long-tap to get more details. There are also buttons to edit an event or create a new one (you’ll be taken to a native calendar screen in Agenda+). 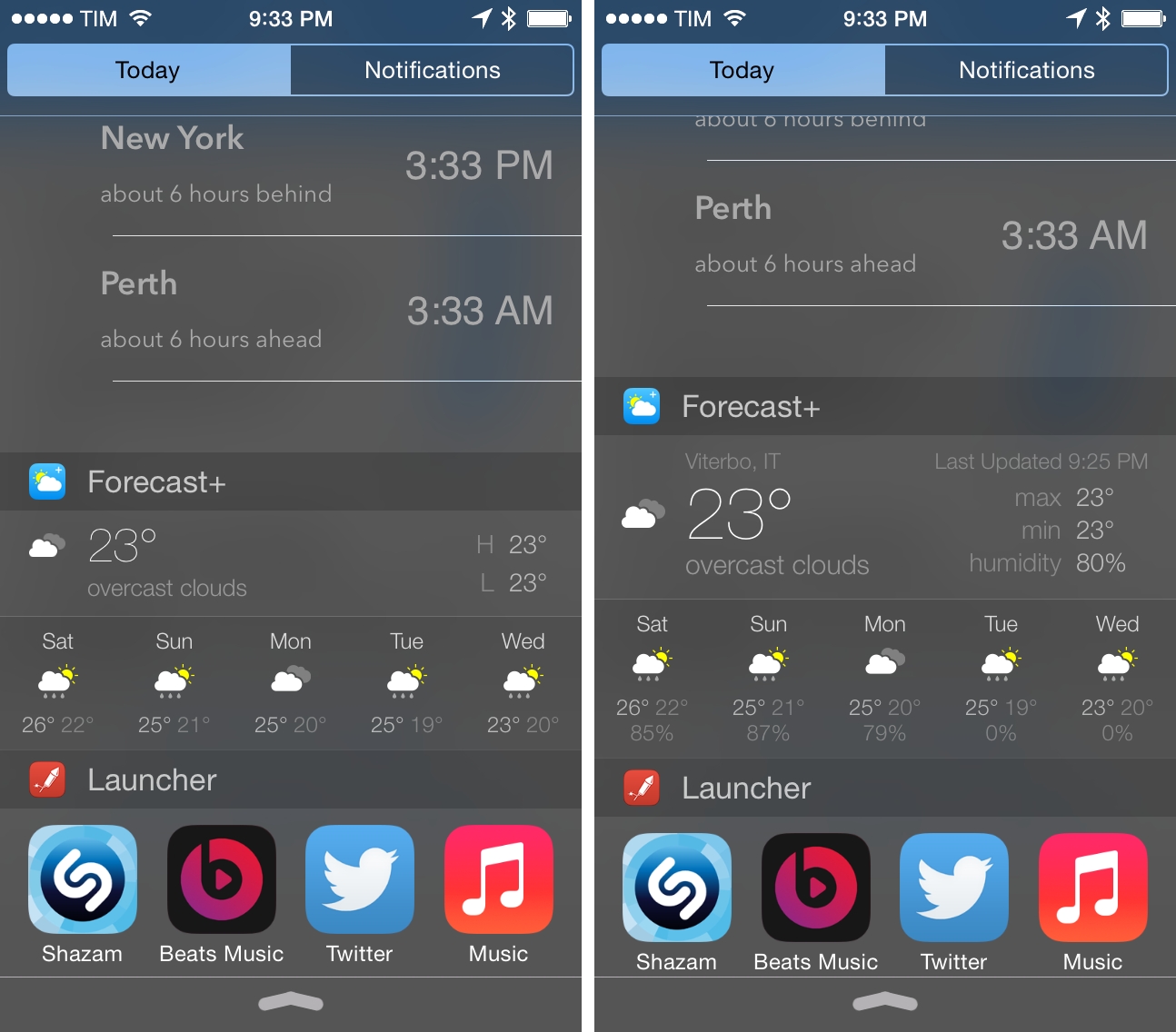 Forecast+ is a widget for weather forecasts. You can assign a location and choose to view a compact mode to save space, or a larger one with the forecast always shown. 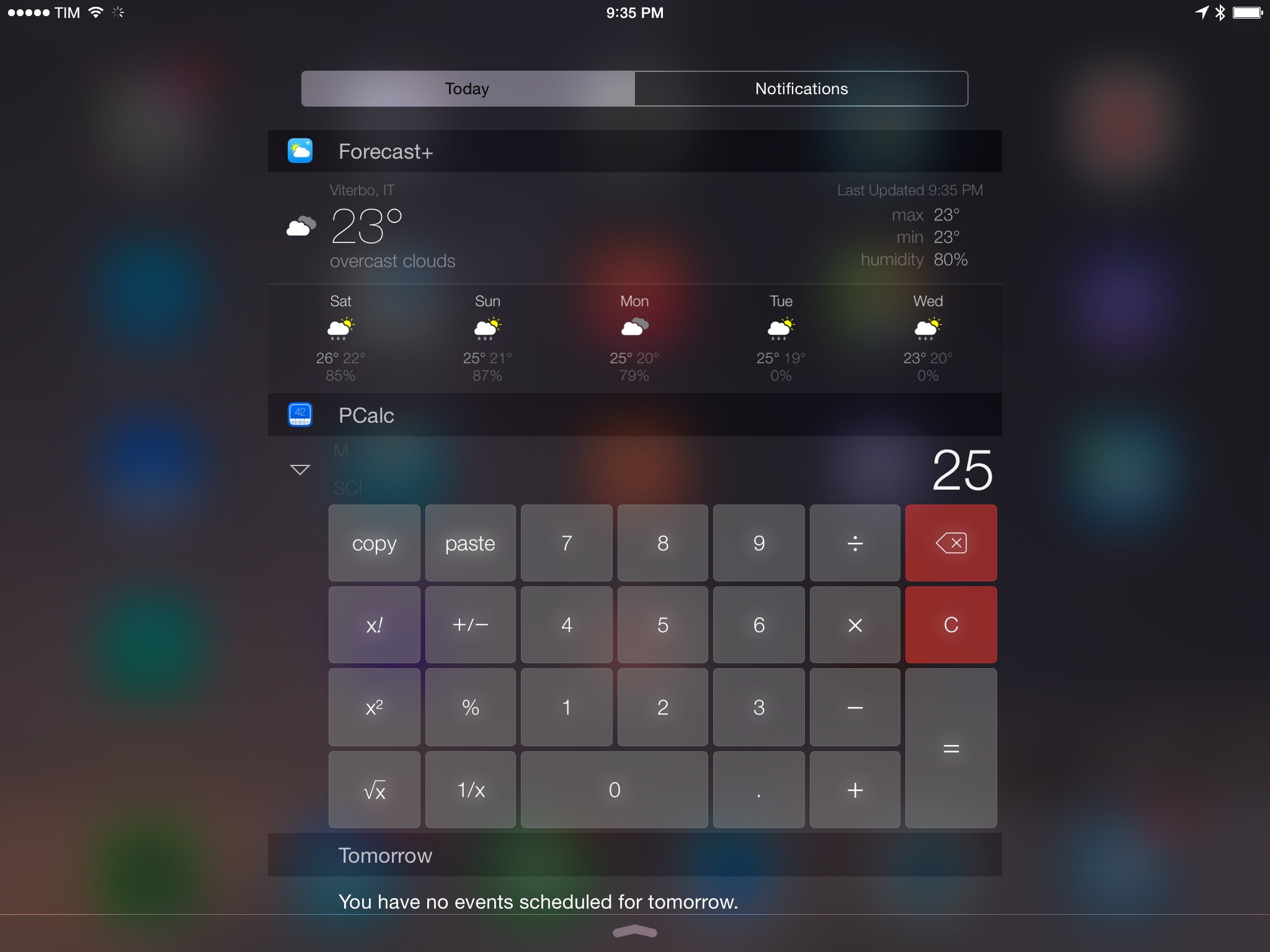 The new PCalc is fairly amazing: this historic calculator app by James Thomson now lets you create your own layouts and perform calculations in a widget, which you can tap to open the full app.

I’m having fun coming up with my layout with personalized buttons for currency and unit conversion, but most of all I’m enjoying the convenience of a calculator widget in Notification Center. 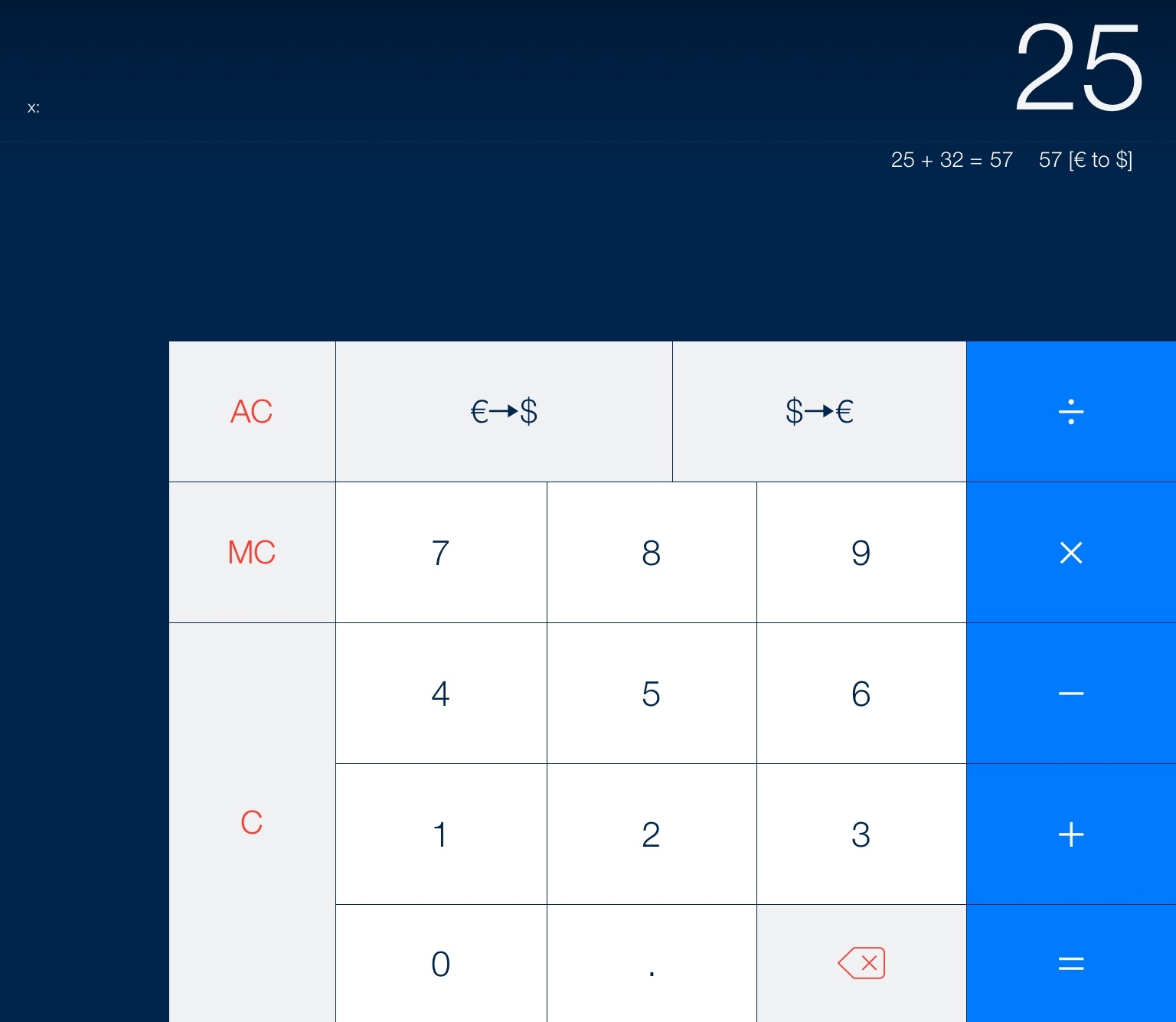 PCalc is great, and I’m hoping that custom layouts will sync to the widget eventually.

David Smith’s simple step counter for iPhone was updated with support for more stats and a widget. The widget shows the amount of steps you’ve taken today as well as estimated distance – a nice reminder that I should move more.

My favorite journal app for iOS was updated with a widget that lets you see a graph for recent entries and “flashback” photos from the same day in the past. If flashbacks aren’t found, the app loads a random photo from your journal. Good way to rediscover old memories in the Today view. 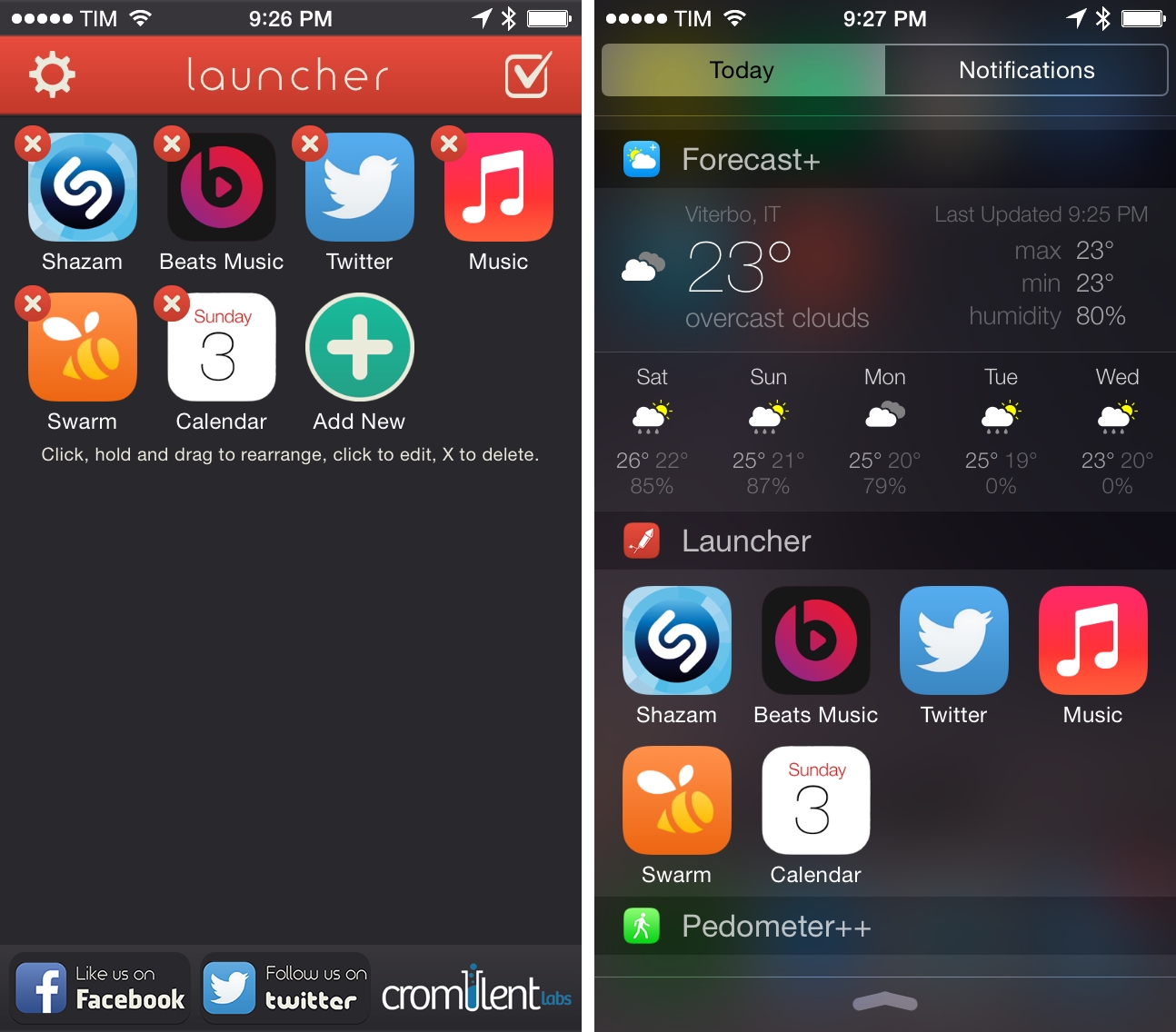 Launcher puts shortcuts to your favorite apps in Notification Center. Think of it as an extremely simplified version of Launch Center Pro that supports apps that have URL schemes. I put shortcuts to Shazam, Beats Music, Twitter, and Swarm in a widget, but you can also set up shortcuts for websites and contacts. Alternatively, you can use any URL scheme and launch it as a custom shortcut from the Today view.

Tapity’s excellent time tracking app for iPhone now lets you start timers in Notification Center, dramatically reducing the friction required to track how much time you’re spending on a project. 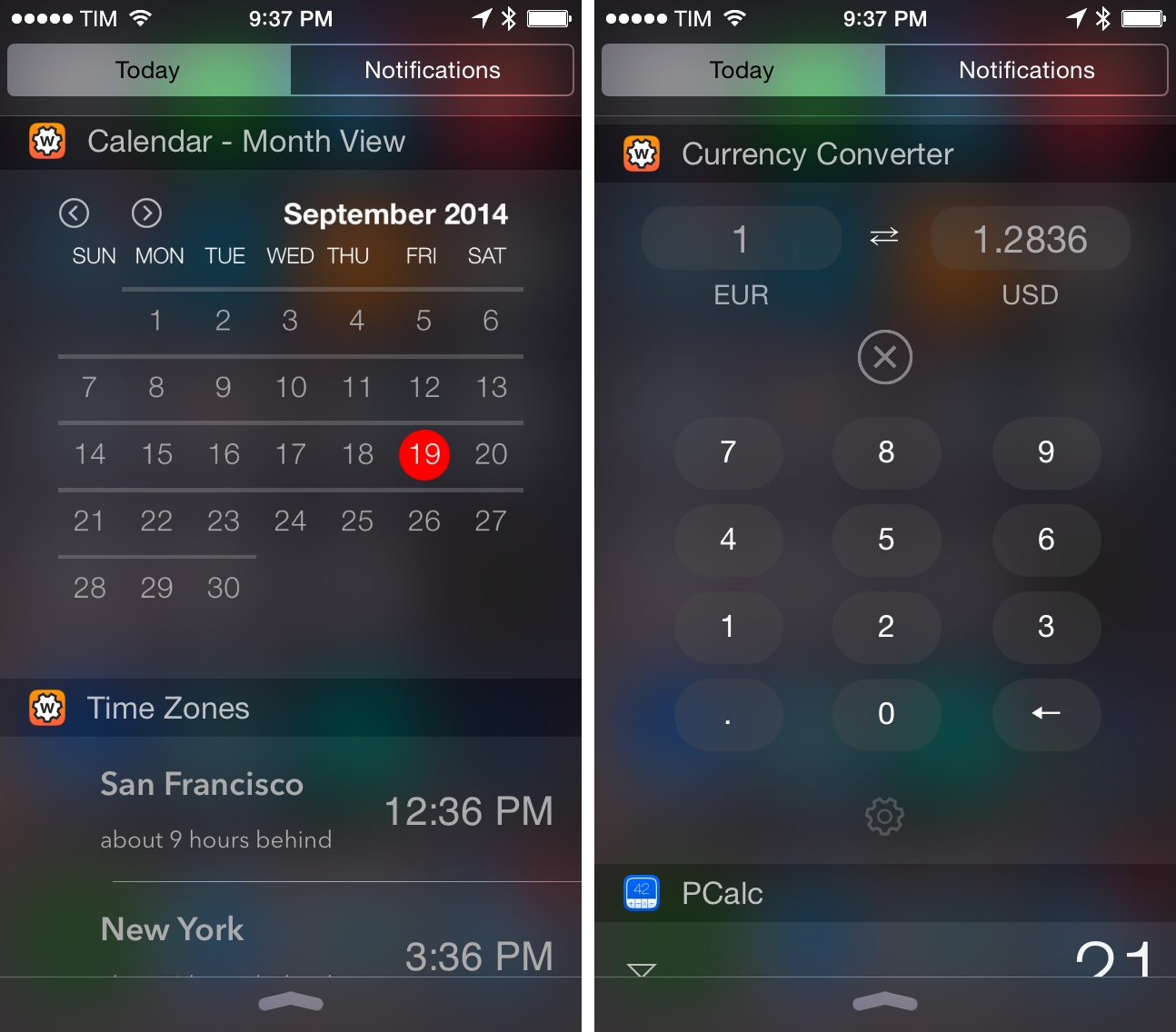 As the name suggests, this is an app that offers a collection of widgets.

There’s a month view for the calendar that lets you see a full month at a glance, highlights the current day, and allows you to switch between months. A time zone widget lets you configure locations and it displays their time zones with difference from your location. And, there’s a handy currency converter widget that includes a numeric keypad you can use to convert currencies in a couple of seconds. 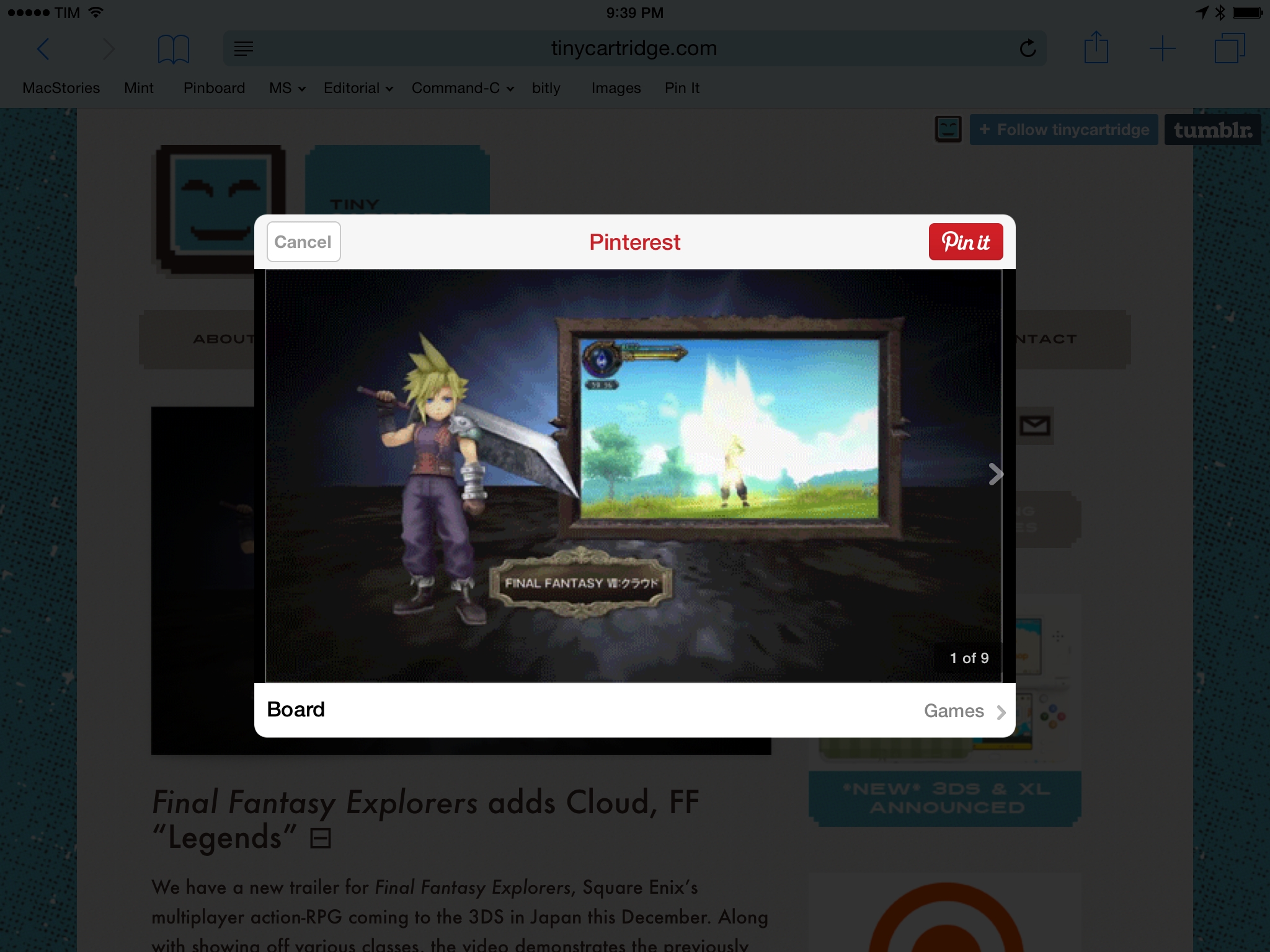 Pinterest was updated this week with a share extension (originally demoed at WWDC) that lets you clip content from any app. I’ve been using the extension to save images and videos from Safari, and it works well. Together with Evernote, one of my favorite iOS 8 extensions so far. 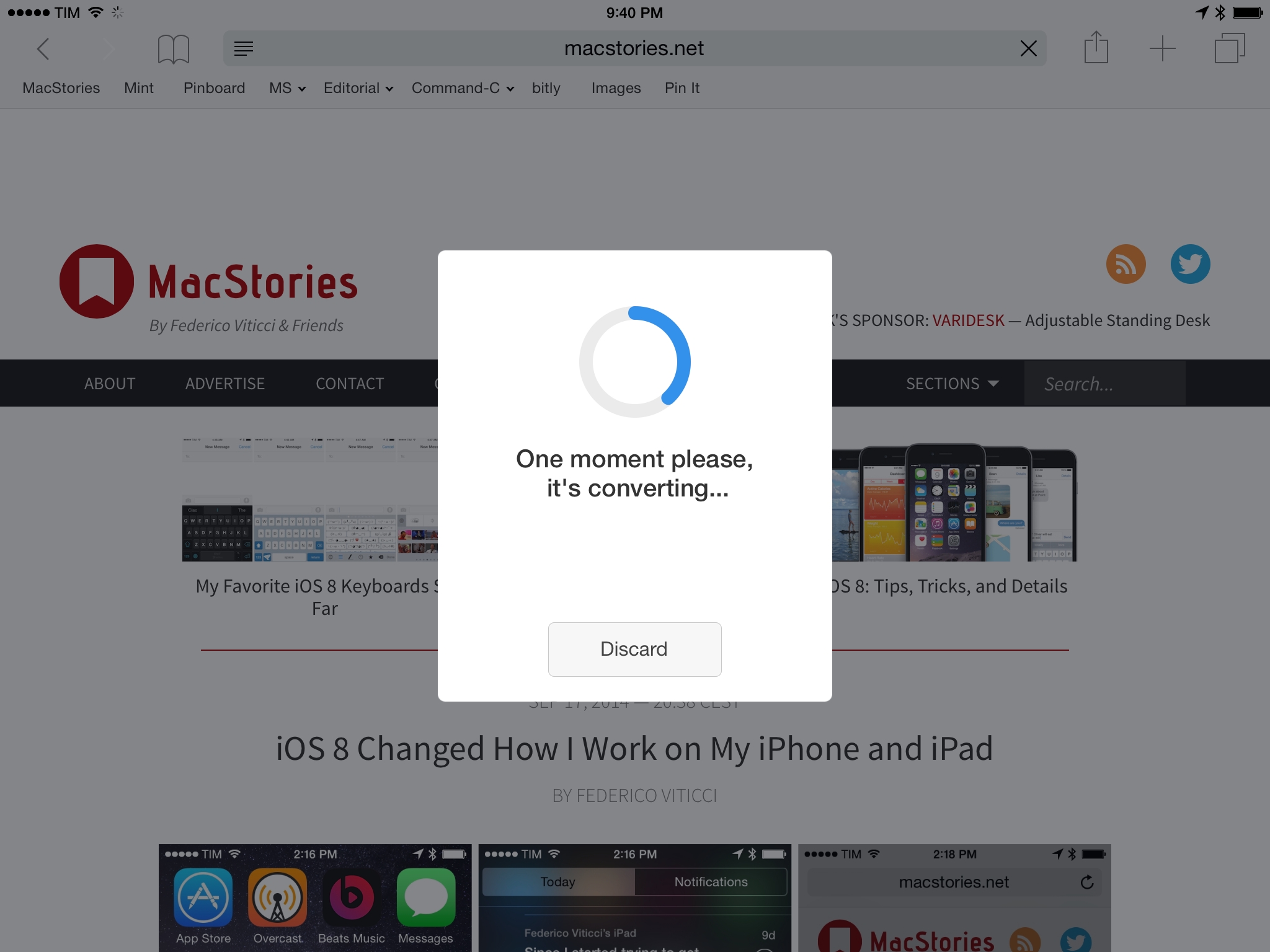 Readdle’s PDF Converter can convert any webpage or document to PDF from the system share sheet. I’ve long wished for a “Print to PDF” feature in Safari, and PDF Converter’s extension brings exactly that to iOS. Documents are automatically saved in the app in the background.

This action extension finally brings the ability to view the source code for webpages to Safari. Source code is displayed in full-screen in the browser; you can choose themes, copy the source to your clipboard, or share it via email from the extension.

We’re using Slack for Relay FM, and the iOS app has been updated with the ability to post files through an extension. I’ve been using Slack from the Photos app to share images to a specific channel (private groups are also supported) and add a comment without having to open the main Slack app, wait for messages to reload, and type text there. It’s fast and easy.

Readdle’s scanner app for iOS can now be a photo editing extension. Took a photo of a receipt? Open the Photos app, edit with Scanner Pro, and you’ll find the app’s usual feature set for border detection, color conversion, plus brightness and contrast sliders. 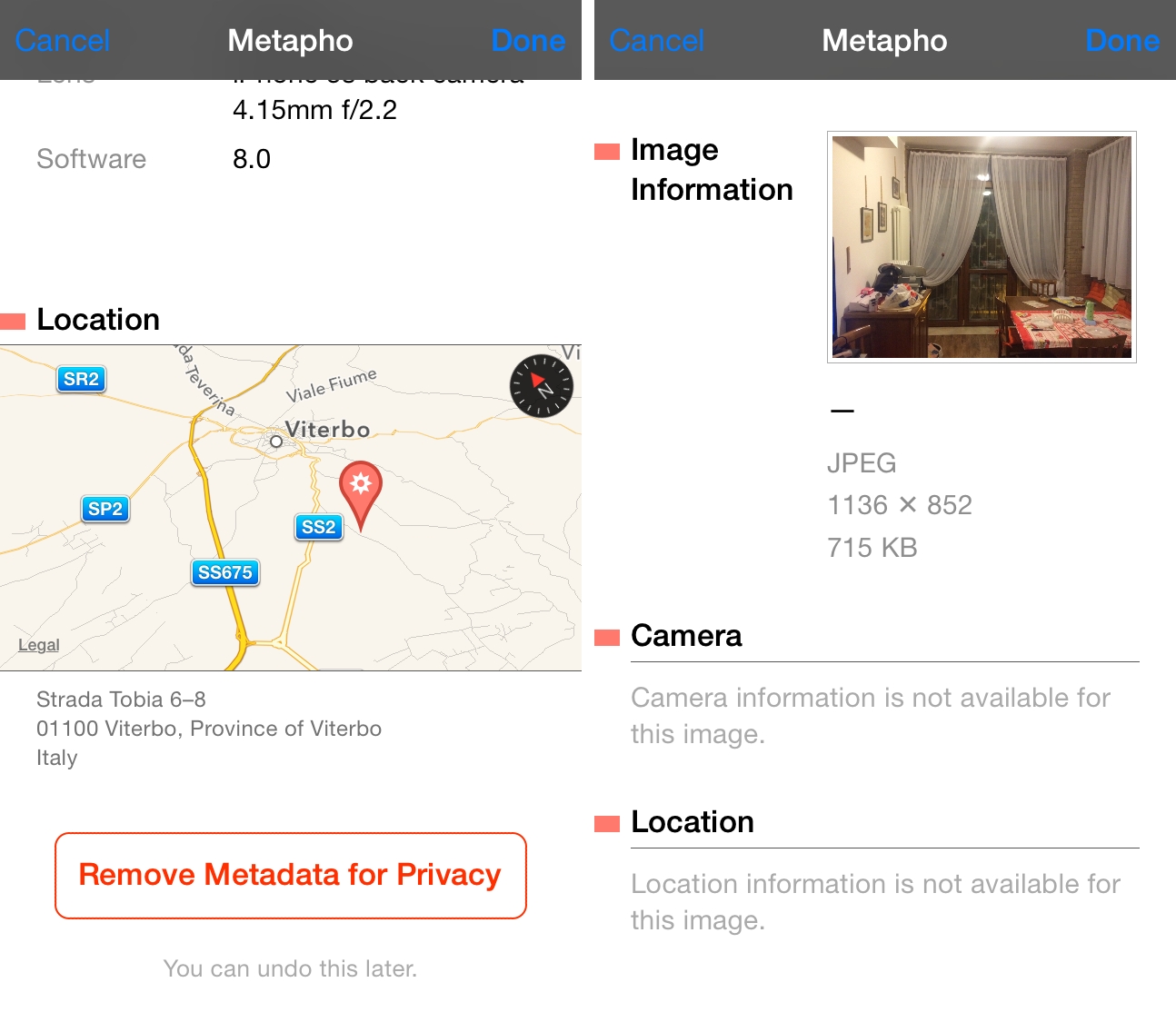 This handy utility lets you remove metadata from your photos. However, thanks to iOS 8, Metapho can be integrated with Apple’s Photos app as a photo editing extension. Open a photo, tap Edit, choose Metapho, and a sheet will come up displaying metadata included in the file. You can use Metapho to simply preview these extra bits of information, but if you unlock the Remove functionality with an In-App Purchase you’ll be able to do it directly from the Photos app. Must-have if you want to share photos without metadata.