It’s been nearly seven years since Twitterrific 5 launched on the App Store, and so much about Twitter has changed since then. One major shift is the seismic increase in media shared on the platform; as our devices and data speeds have gotten faster, so too have the amount of GIFs, images, and videos we share online grown. While Twitterrific has certainly done its fair share of adapting for the times in previous updates, adding improved media controls and the like, today Twitterrific 6 introduces the most significant updates for the app’s media experience to date. There’s a new GIPHY integration, autoplaying videos and GIFs in the timeline, and a lot more. Added to that, users can now customize their Twitterrific experience in fresh ways thanks to additional themes, icons, and a new font. 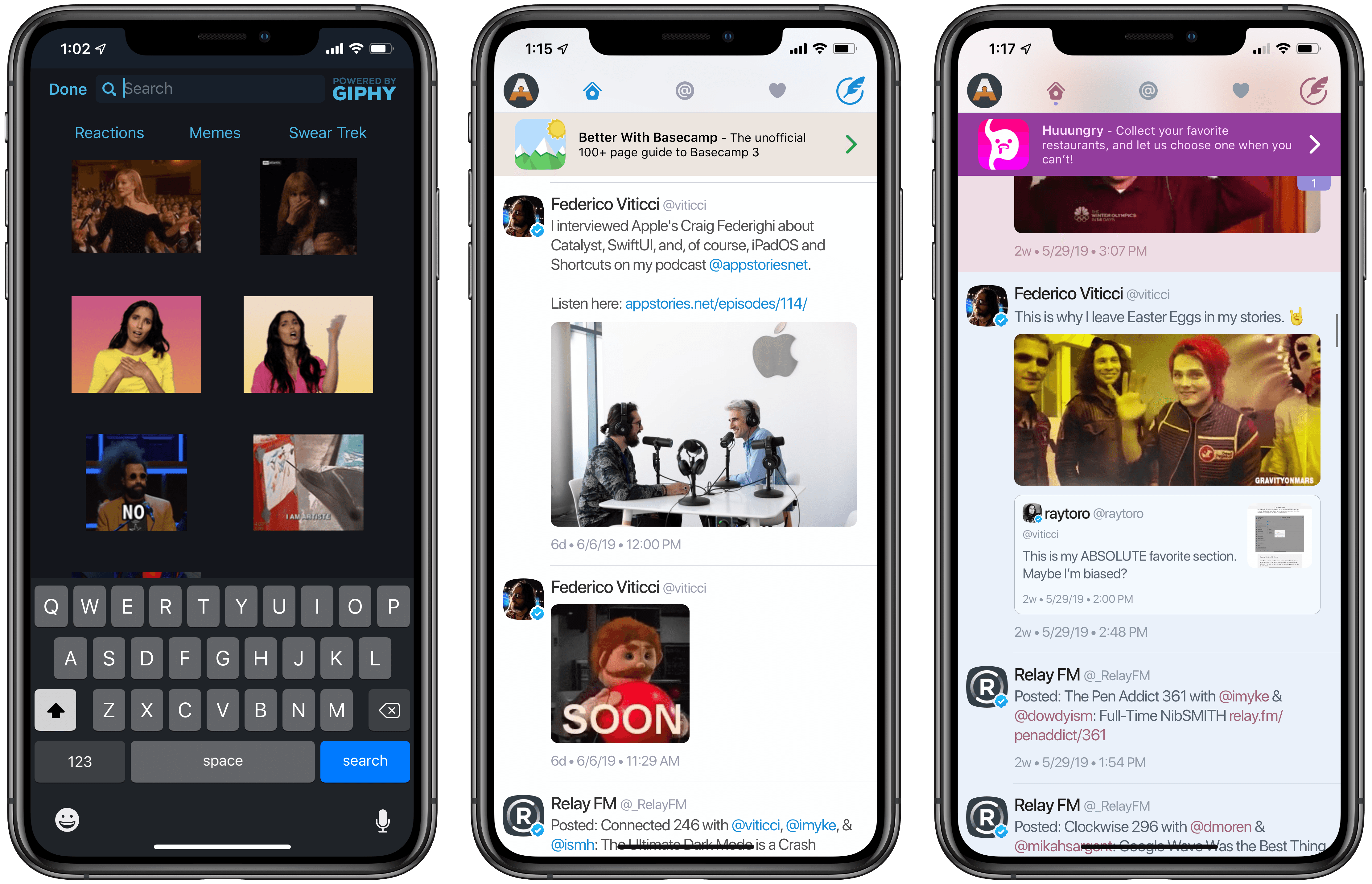 GIPHY support has been built right into Twitterrific, so whenever you compose a tweet you’ll see a new GIF option that brings up a library of GIFs you can browse or search to add to your tweet. There are also three built-in filters you can activate with a single tap: Reactions, Memes, and Swear Trek.

GIFs and videos now autoplay as you scroll your timeline, a fantastic addition that nonetheless can be disabled if it’s not your thing. All audio is automatically muted by default, but if a video contains sound you’ll see a volume indicator in the lower-left corner of the thumbnail; tapping anywhere on the video loads it in a full view and unmutes the audio.

Another meaningful improvement to media in your timeline is that images are now displayed in their native aspect ratio; no longer will a thumbnail preview be cropped, except in cases where multiple images are attached to a tweet. The way Twitterrific displays images in the timeline has always bugged me, so I’m really happy to see this change in version 6.

Recently Twitter made it possible for quote tweets to include media, even in cases where the tweet being quoted has its own media attachments. Twitterrific 6 now fully supports this feature, displaying both the quoted media and that of the new tweet in your timeline.

Finally in the realm of media, there’s a new attachment preview screen where you can view full-screen previews of your attached content and also add accessibility descriptions to them if you choose. 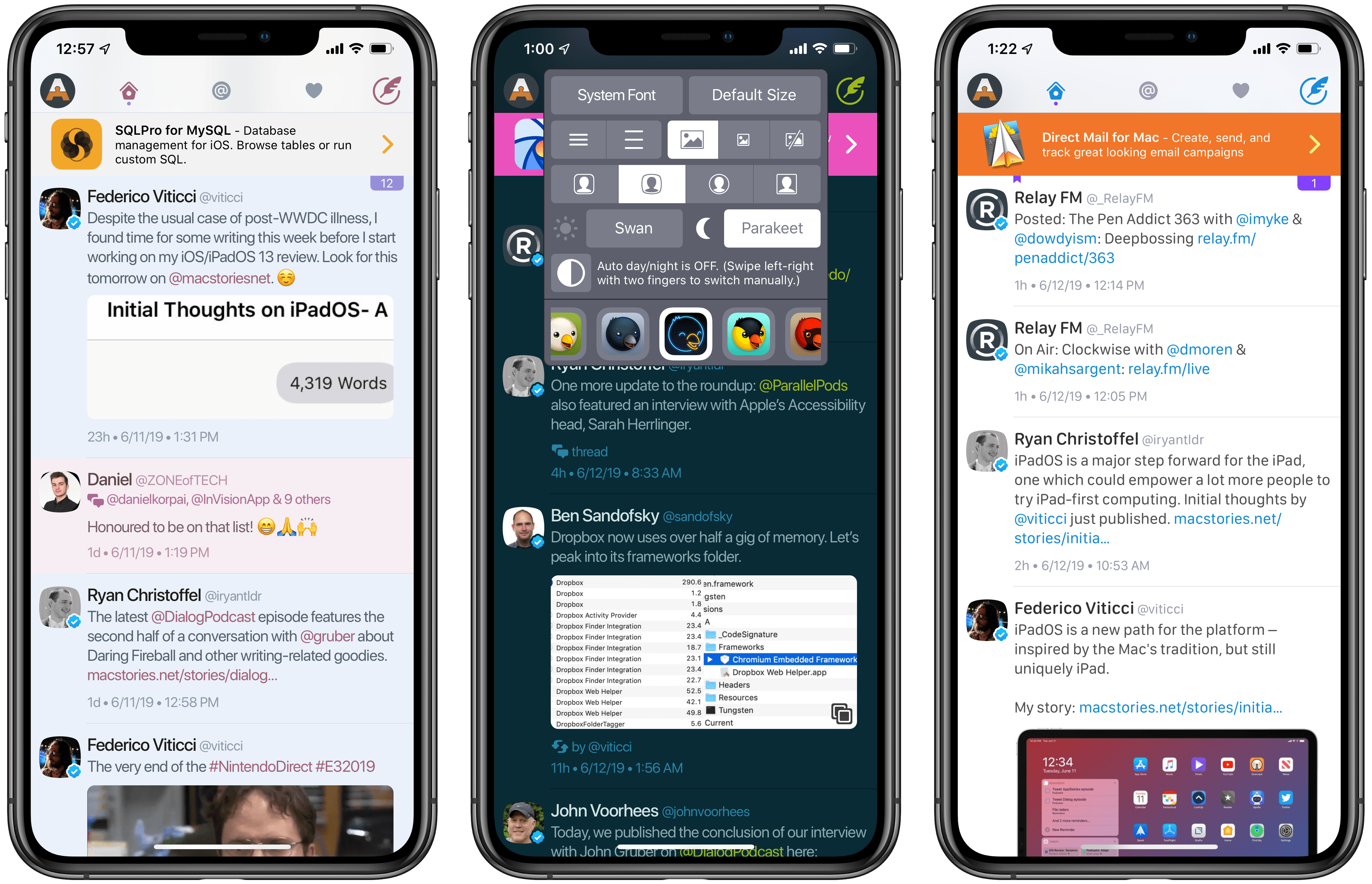 Recent updates to Twitterrific have offered more and more ways to customize the app’s appearance to your preferences, and version 6 continues that trend with a handful of new display options.

Themes have received the biggest upgrade, going from three previously (Light, Dark, Black) to a grand total of eight in Twitterrific 6. There are now three light themes and five dark themes, each named for a different bird. Two light themes are fairly similar, with the same uses of white and taupe but differences in accent colors; the third theme heavily employs pleasant shades of blue and pink. Dark themes use varying shades of blue, brown, gray, and black to offer a range of differing choices.

Joining the expanded set of themes is a new font option: SF Rounded, which is a variation of iOS’ systemwide San Francisco font that instantly became one of my favorite Twitterrific fonts.

Rounding out Twitterrific 6’s customization options, there are three new app icons, of which Neon is my new icon of choice, and the app’s iMessage sticker pack has 12 new stickers for using Ollie, the app’s mascot, in place of common emoji.

Twitterrific 6 arrives, as I already mentioned, almost seven years after version 5 debuted. App Store economics have changed a lot in that time period, so it’s no surprise that Twitterrific’s pricing model has been revised in this new update.

The full Twitterrific 6 experience is free to all users, however most users will now have banner ads display in the app unless a purchase is made, as well as receive occasional pop-ups encouraging them to make a purchase. Purchase options include subscription plans – $0.99 monthly or $9.99 annually – or, if you’d like to avoid a subscription, you can make a one-time $30 In-App Purchase to remove ads for the life of Twitterrific 6.

If you’re an existing Twitterrific 5 user, the above pricing structure comes with some asterisks:

If you have any further questions about Twitterrific 6’s pricing model, The Iconfactory has published a detailed breakdown here.

It’s been a challenging season of late for third-party Twitter clients. Twitter has stripped away key functionality these apps once offered, all while the service’s first-party client has grown more capable itself. Despite these changes, however, there remains a large market for custom-tailored Twitter experiences that only a third-party client can offer. Apps like Twitterrific continue to offer the features power users demand – full control of timeline sorting and position sync across devices, customizable themes, fonts, icons, and more, and a timeline free from promoted tweets.

It’s for these reasons and more that I’m glad Twitterrific 6 addresses areas the previous version had fallen behind in, particularly in the realm of media. The business model changes may not be welcome to some, but my hope is that they enable Twitterrific to have a long, healthy life, propelling the app into a bright future.