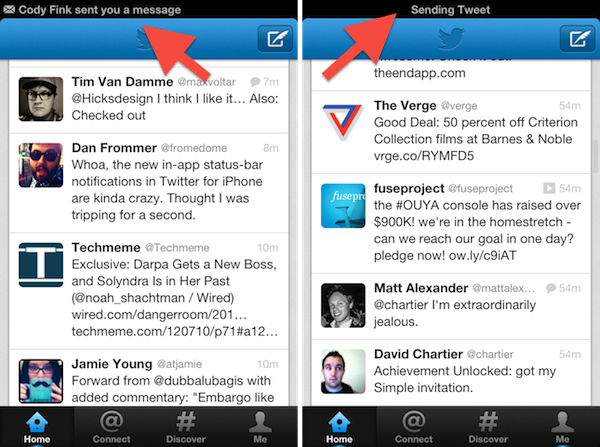 As I was telling a fellow compatriot on Twitter, the Twitter apps exist as the gateway drug. Twitter’s app isn’t for the Tweetbot socialites who are connected to their timelines 24/7, nor is it for the Twitterrific users who treat Twitter as the break room water cooler. While many writers were waxing poetic on a disappointing update following the leave of Loren Brichter from Twitter, I tried to look at how Twitter was making their experience friendlier for everyone, and not just for the power users (who have, admittedly, established Twitter as what it is today).

Twitter’s focus shifted to answer two questions, “How do we retain users who leave because they don’t get Twitter, and how do we make money?“ The Twitter app exists not to serve people who want to mange their timelines, but for people just joining the service. It exists to show new users what Twitter is all about: this was made obvious with the Connect tab ousting Direct Messages. Its sole admission is to help newcomers get accustomed to finding and following people, things, or companies they are interested in. Then there’s Promoted Tweets which insert themselves into your timeline — it’s as intrusive as an advertisement but so far minimally impacts the experience. Twitter’s app is designed to show what you can do in (what I think) is an aesthetically pleasant package. It’s not for you, Tweetbot users.

Trying to defend Twitter gets people upset. Most everyone who read MacStories and are interested in tech want features — they want the Twitter emblematic of Tweetie and Tweetbot, not of the new Twitter. And I certainly understand that Twitter took away what was once an optimal experience for lots of people. In my approach, I understand that while Twitter shunned power users (which Tweetie users happened to be), they’re trying to make something everyone can use. It’s not an app fraught with finicky settings, but rather an app that provides a simple, core experience. I initially reviewed Twitter from a perspective of a newcomer — I think the app looks nice and for what functionality it does provide, that functionality works as intended. Unfortunately for Twitter, this message isn’t getting across. The audience Twitter wants (the audience I tried to put myself in) isn’t as vocal as the established user base is.

Let’s be honest: even I, despite trying to account for what new Twitter really is, use Tweetbot — heck, I still go back to my old favorite Twitterrific from time to time. And I don’t think anyone should mind that Twitter’s app exists as-is if Twitter is presenting their app as the gateway, and not as the path. I’m in agreement with what Twitter is trying to do as long as their app coexists peacefully with 3rd party Twitter clients. However, I’m not going to continue making my claim for why Twitter’s experience is okay if they’re shunning 3rd party developers and sending mixed messages in the process. I’m not okay with Twitter’s experience being the only experience.

Before we delve into the bad, let’s talk about the good. Twitter users will love what Twitter has done to improve usability, especially when it comes to push and in-app notifications. 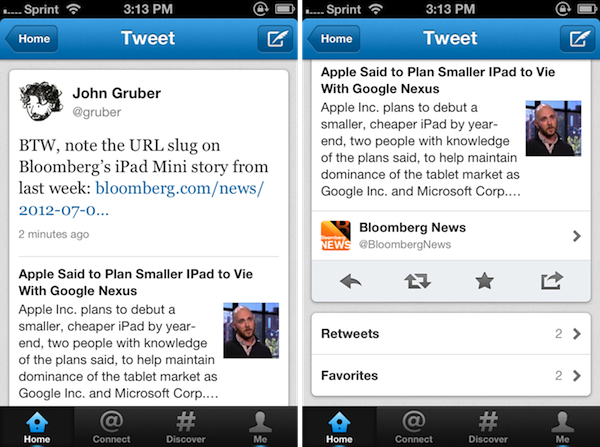 As you’d expect from any client, in Twitter 4.3, tapping on a user’s avatar now takes them to their profile. Secondly, expanding a Tweet will show a brief description of what someone is linking to (if the link is to a partner website). Seen above, a link to a Bloomberg displays an overview of an article. Expanded tweets also let you play videos and view pictures without having to visit the sources themselves.

Interestingly, Twitter has expounded upon push notifications and notifications in a big way. If you really like a celebrity for example, you can get notifications every time her or his account tweets by going to the settings, turning on Tweet notifications, then visiting their profile and selecting, “Turn on notifications” after tapping the gear. No other Twitter client lets you receive notifications from other accounts (yet). Twitter certainly have the infrastructure to pull this off, and I imagine their thinking is that users can always stay connected to their friends, who they’re fans of, and brands. Being in the tech space, I can personally see this being useful for event updates and product launches.

Borrowing the idea from Tweetbot, Twitter now includes “ambient notifications” that pop up inside the status bar (instead of over the timeline) to inform you of incoming tweets while you’re in the app. Another subtle addition: sending a tweet now displays its published status in the status bar after tapping the send button. These additions are cute, to say the least, but Tweetbot’s notifications are immediately more obvious and noticeable.

Twitter 4.3’s biggest change is the removal of the User Agent, AKA the “via client” you’d see at the bottom of Tweets when you viewed them. It’s incredibly foreboding — 3rd party developers who are or who plan on doing interesting things with Twitter are suddenly being shunned. I feel it’s no different than if a blogger or journalist took credit for a post without mentioning or linking to their source. Twitter has a vibrant ecosystem of apps and they should acknowledge it.

Matthew Panzarino of The Next Web wrote about the change in a recent blog post, and also discussed some of the reasons why Twitter might have done so earlier this weekend.

Either way, it’s a step backward for client discoverability, as people will now no longer see where a Tweet came from, it will just be ‘from Twitter’.

Even if the other considerations he makes are true — that it’s just an innocent design decision — I don’t think Twitter can get away with saying that. Twitter was built on the success of and the competition between third party Twitter clients.

Then there’s Twitter’s recent message to developers from their developer blog, reiterating that they want Twitter apps to provide a “consistent experience” across apps and platforms. The cause for concern has been highlighted below:

Back in March of 2011, my colleague Ryan Sarver said that developers should not “build client apps that mimic or reproduce the mainstream Twitter consumer client experience.” That guidance continues to apply as much as ever today. Related to that, we’ve already begun to more thoroughly enforce our Developer Rules of the Road with partners, for example with branding, and in the coming weeks, we will be introducing stricter guidelines around how the Twitter API is used.

While Twitter is suggesting that developers should stop making Twitter apps, they’re also quietly recognizing at least one of those apps (Tweetbot) by imitating one of its core features. What does Twitter really want?

Twitter clients are a dime a dozen — only a few are really good, but the proliferation of Twitter clients signifies that how people read Twitter, whether it be for business or personal use, is incredibly personal. People want to have features that let them filter timelines, sort Tweets into multiple columns, and highlight keywords. There are a multitude of native and web apps that help people find new ways to engage themselves within Twitter’s service — part of Twitter’s appeal is that developers can hook into a user’s timeline and manipulate it in new, interesting, and innovative ways. I’ve always seen Twitter as the enabler, and 3rd party developers as the advocates of innovation and communication.

As an app, Twitter wants to be the simplified experience that gives newcomers and casual Tweeters a way to get connected and stay connected to what they love. As a service, Twitter feels conflicted about bringing  back features for power users and alienating the very ecosystem that made Twitter popular, and more importantly, useful. Twitter 4.3 continues to improve upon how tweets are presented (I think Twitter’s tweet views are good), but I can’t help but be disappointed that the app no longer recognizes where those Tweets are coming from. I’m hoping the website doesn’t follow suit.

If Twitter continued to improve on Tweetie, I think people would be more forgiving about where the service stands. Unfortunately it’s not, and from what I’ve understood, Twitter’s goal was to provide an introduction to the service, letting 3rd party apps fill in the gaps that people wanted. However, if Twitter 4.3  is any indication, it appears that Twitter no longer wants this to be the case. If this is Twitter’s new intention, then I’m not okay with the experience Twitter 4.x provides if it becomes the only option.