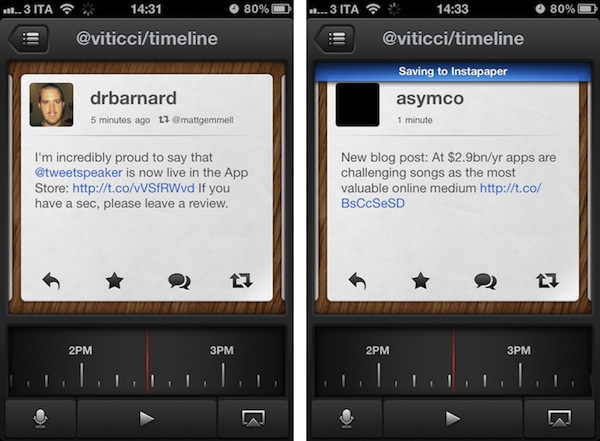 At the “Let’s talk iPhone” media event earlier this week, Apple officially previewed Siri, a voice assistant that will be integrated with several functionalities and apps of iOS 5 on the new iPhone 4S: Siri is a new way to get things done and obtain information just by asking. In the Siri demo, Senior VP of iOS Software Scott Forstall showed that it’ll be possible to get word definitions, look up anything on the Internet, do basic currency conversion, create reminders, and more. In fact, the list of Siri commands seems quite impressive, and the fact that the system is integrated with online services like Yelp and Wolfram Alpha should allow for always up-to-date, reliable and real-time data that lives outside the iPhone itself, but it’s immediately accessible.

What Apple didn’t preview during the Siri demo, and which I’m not sure will ship with the final version of the app next week, is Twitter integration. In iOS 5, Twitter is integrated systemwide to let you tweet photos and webpages, update your Address Book contacts and sign in with any Twitter enabled app. But will Siri be able to read your Twitter timeline? Or send a mention to a specific user? Or, again, will Siri eventually get these capabilities, if not next week perhaps in a few months?

I don’t know, but right now, there’s this sweet new app by App Cubby out in the App Store, it’s called Tweet Speaker and it lets listen to your Twitter timeline for $2.99.

Both App Cubby’s website and iPhone app share a beautiful design and attention to detail. Tweet Speaker offers an interesting mix of dark UI elements, clean and simple tweets and 3D buttons that provide a nice contrast again the wood texture in the background. Tweet Speaker looks great, and its interface is functional to the app’s main feature. Once authenticated with your Twitter account, Tweet Speaker will begin loading tweets from your timeline; alternatively, you can switch to mentions or a specific Twitter list. In the timeline view, a bar at the bottom lets you move between hours of the day and jump to, say, tweets from the afternoon or early in the morning. Tweet Speaker is fast at loading tweets and it’s even got support for Tweet Marker, if you’re already using the service in apps like Twitterrific or Tweetbot. A nice touch in Tweet Speaker’s UI are the small notification popups that will appear on screen as tweets are loaded or items sent to Instapaper (natively supported), and I also like the app’s horizontal pull-to-refresh that appears as you reach the most recent tweet in your timeline.

As you hit the play button, Twitter Speaker will start reading your tweets. There’s only one male voice available now (more will be coming soon), and it sounds pretty natural. I like how this voice treats retweets and mentions differently, saying “Mark retweeted  from Chris” or “Tim said in reply to Sofia” – it even goes as far as trying to fetch the title of an http:// link when available (like the title of an article on this site). Perhaps the touch functionality of Tweet Speaker won’t be used much when jogging or driving, but the app enables you to reply to tweets, retweet them, mark them as favorites, and load conversations between users. You can follow/unfollow users directly from Tweet Speaker, configure a tap&hold action for Safari or Instapaper – you can also send your iPhone’s audio to AirPlay to listen to tweets on the big screen or through your favorite speakers.