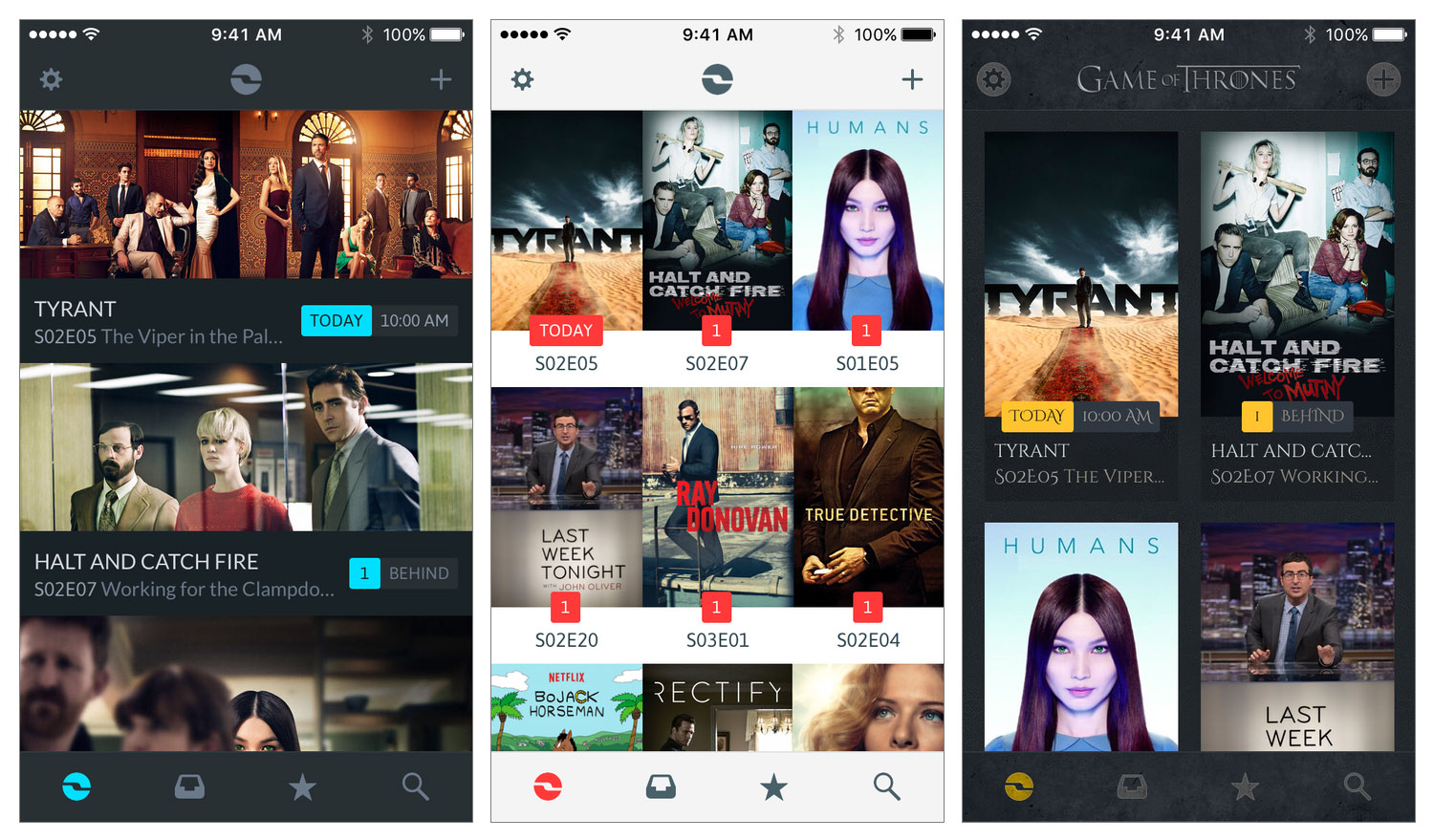 I watch a lot of TV – almost certainly too much TV. Years ago I used to keep track of the TV shows I watched mentally and through a TV guide from the Saturday newspaper. But as I started to watch more TV it became harder to keep track of when shows air. Fortunately, I started to use iPhone TV tracker apps, which make it effortless to keep track of your favorite TV shows. I’ve probably used 4 or 5 different apps for a solid period of time, and this February I switched to what I think is the latest and greatest TV tracker app: iShows 2, which officially launches today in the App Store.

I had briefly used the original iShows app, but I never permanently switched to it. Whilst the design was quite good, it had this very odd layout that left a gap on the side of the screen which (as petty as it sounds) I couldn’t get over. Somewhat embarrassingly the other issue I encountered was that I never discovered some of the gestures, without which the app was a lot harder to use. Some of those gestures persist in iShows 2, and I’ll discuss them shortly.

Prior to switching to iShows 2 whilst it was in beta, I had been using iTV Shows for around a year. It never looked quite as good as iShows or TeeVee 3 (another popular and very pretty app), but I preferred the way iTV Shows worked. I’m still a fan of iTV Shows, but I’ve been convinced (after months of use) that iShows 2 is the better option for me.

When you track a TV show in iShows it’ll start off being included in your active TV shows list. But you can also move shows to an Archive list and a Favorites list. At first I wasn’t sure about the utility of having these different lists, but I have since begun to use the Archive list for shows that I didn’t want to watch week to week but will watch in a few months when I’ve got some time to spare. By placing them in the Archive list, your Active list isn’t clogged up with shows you don’t intend to watch for many more months and they won’t contribute to the iShows badge on your Home screen.

I’m not using the Favorites list, but I can imagine others might get utility out of it. In particular, there is an option to only turn on notifications for favorite shows, so if you only want to be alerted to your absolute must-watch TV shows, that’s an option for you.

This is perhaps the most important thing to learn about iShows: swipe left on a TV show to quickly mark an unwatched episode as watched.

Naturally, iShows can also send notifications when a new episode airs. In the app’s options you can alter the time for when they are sent (fixed time or show time) and as mentioned, you can choose to only send notifications for favorite shows.

Just a heads up, because this might be a bit confusing, but you will also get notifications for shows that appear in your Archived list. The developers explain that a lot of people place shows that are on hiatus in their Archive list and if notifications weren’t sent, those users wouldn’t know when a show returns. This makes sense, but it would be nice if we had the option to disable it.

iShows has a simple but useful Notification Center widget which can either display the upcoming episodes, or the pending shows that have unwatched episodes. My one gripe is that there is a fixed limit of 4 shows that will be displayed, even if you have 6 shows with pending unwatched episodes.

If you’re looking for some new TV shows to watch, iShows has you covered with its Discover section. You can access Discover by pressing the + button in the top-right corner of the screen. When you are in Discover, the tab bar will be replaced with new buttons that take you to iShows Picks, Trending, Popular, Recommendations, Social (based on Trakt), and Search. There’s not much to say: there’s a huge selection of TV shows that are featured in the various sections so you’re bound to find something new that you’ll like.

Three of the Discover pages: Trending, iShows Picks, and Popular

Similarly, if you’re in the Discover section, tapping a show will give you an overview of the series. Tapping the list icon in the top-right corner will bring up the episode list where you can also read about individual episodes. 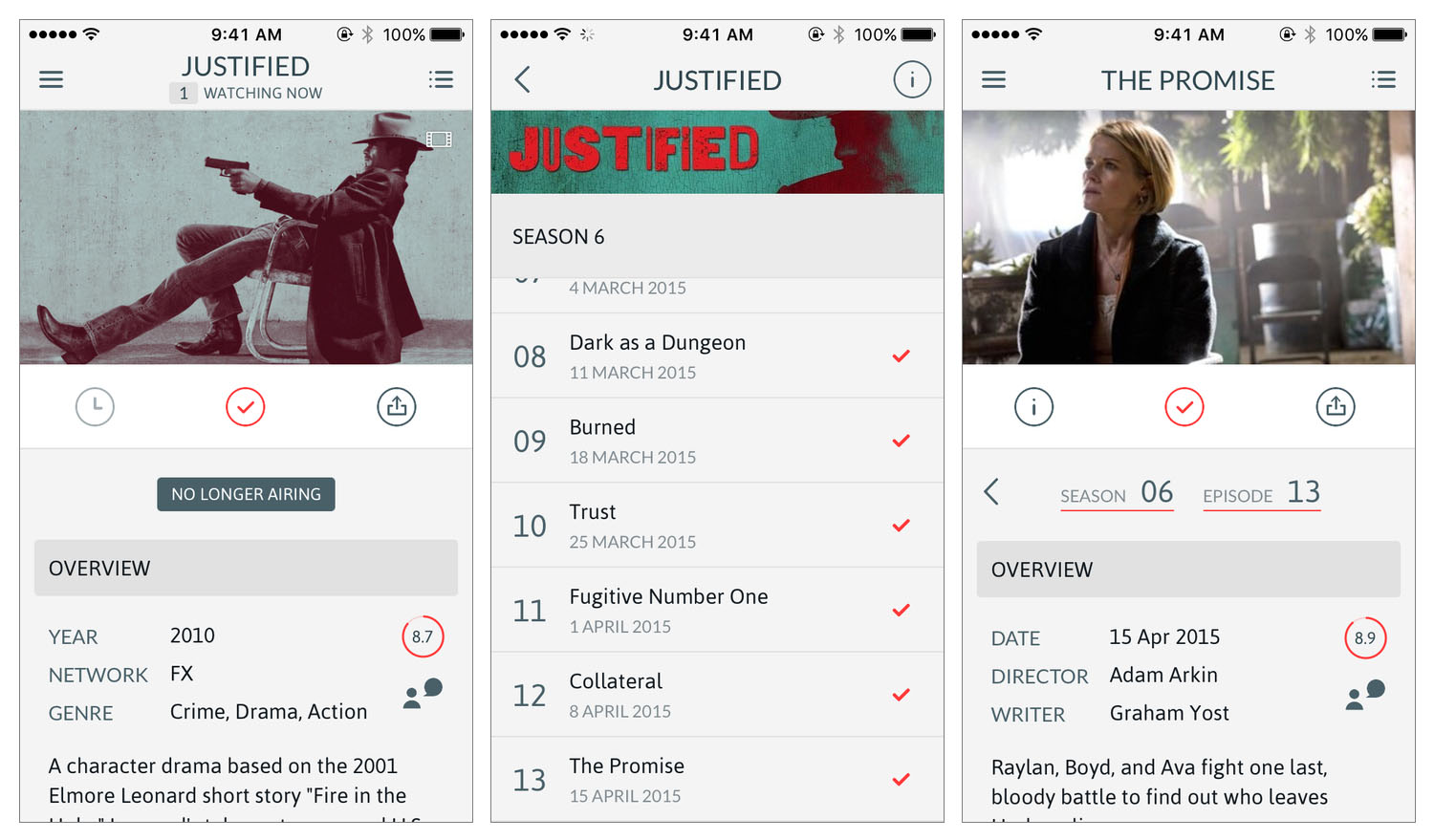 For those of you who would prefer to have a TV tracker on the iPad, you’ll be glad to know that iShows 2 supports the device. You may be less pleased to discover that it is virtually identical to the iPhone app, just expanded to fill the larger screen. But this is okay to me, because most of my time in iShows is on the main screen which is just a wall of TV show art, which looks amazing.

However, what is frustrating is that the iPad app is portrait-only. As someone who uses the iPad in landscape most of the time, this was frustrating. The developers say that this is a temporary problem, but adding landscape is not a high priority at the moment. 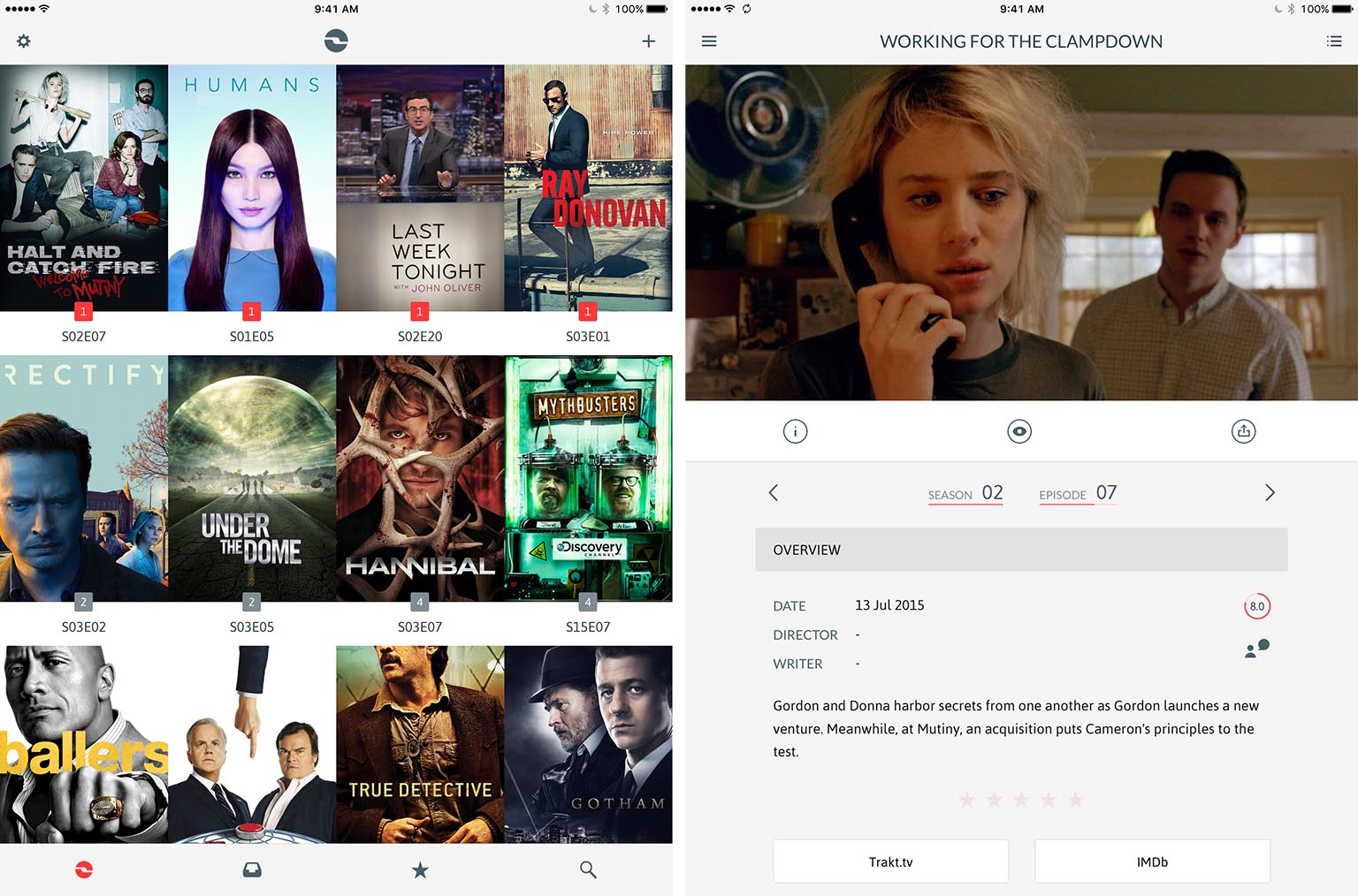 The portrait-only iPad app is pretty much just a scaled-up version of the iPhone app, and that’s mostly okay, I think.

There isn’t one… yet. The developers say that they plan to have one by the end of the year.

There’s no way around this but iShows sync can be frustrating to set up, and it is a mixed bag. Sync in iShows is powered by Trakt.tv and the developers of iShows have explained how sync works in this article, the essence of which can be stated as follows:

Remember the following two rules for a happy sync experience:

The first iShows sync rule: In order to sync a TV show accross devices, you must explictly add that TV show to iShows in every iOS device you plan on using.

The second iShows sync rule: You need a Trakt.tv account.

That first rule is really quite frustrating, because you have to consciously remember to add a new TV show to both your iPhone and iPad. This is one of the reasons that I don’t plan on using the iShows iPad app in the future – it’s just too much hassle.

The other point to note is that if you use iShows, you really should set up a Trakt.tv account and sign into it straight away, that’s because if you later decide to turn sync on, you’ll lose all your local watched states:

Remember! The first time you connect your Trakt.tv account you will lose all your local watched state and it will be replaced with the information coming from Trakt.tv. Don’t worry, that will only be the first time and you will benefit from all the social features Trakt.tv will bring into iShows.

It’s a pity that iShows doesn’t sync new shows that have been added to a new device, but it will sync shows that you mark as archived or favorited. And in my experience the syncing of watched states has been flawless.

Now my maths is a bit rusty, but I think those options add up to mean that there are 108 different variations to the look and style of iShows.

To give you a little taste of the extent of iShows customizability, we’ve built a small HTML5 demo of about half of the options that you are given in the iShows app. For example, this demo only includes the Poster layout, it doesn’t include the Fan Art layout, nor does it show the Premium themes (discussed later). Finally, it doesn’t look as quite as nice as the actual app, but it’s close.

But that’s not the end of it. You can also change the displayed artwork for a show by swiping right on one of the TV shows. From there you can swipe through all the different alternative pieces of artwork to find your favorites. Unfortunately these selections don’t sync across devices, so you’ll have to do it on both your iPhone and iPad.

iShows is free to download and try, but it’s really intended to be a paid app. You’ll be able to use iShows without restriction for up to four TV shows, but you’ll want to get the In-App Purchase that unlocks iShows to be used with unlimited TV shows for $3.99.

You can demo them for one minute by selecting them in the Customization screen and I think they’re bound to be popular amongst a lot of iShows users. The developers told me that if the premium themes do indeed turn out to be a hit, they will almost certainly make more premium themes in the future. 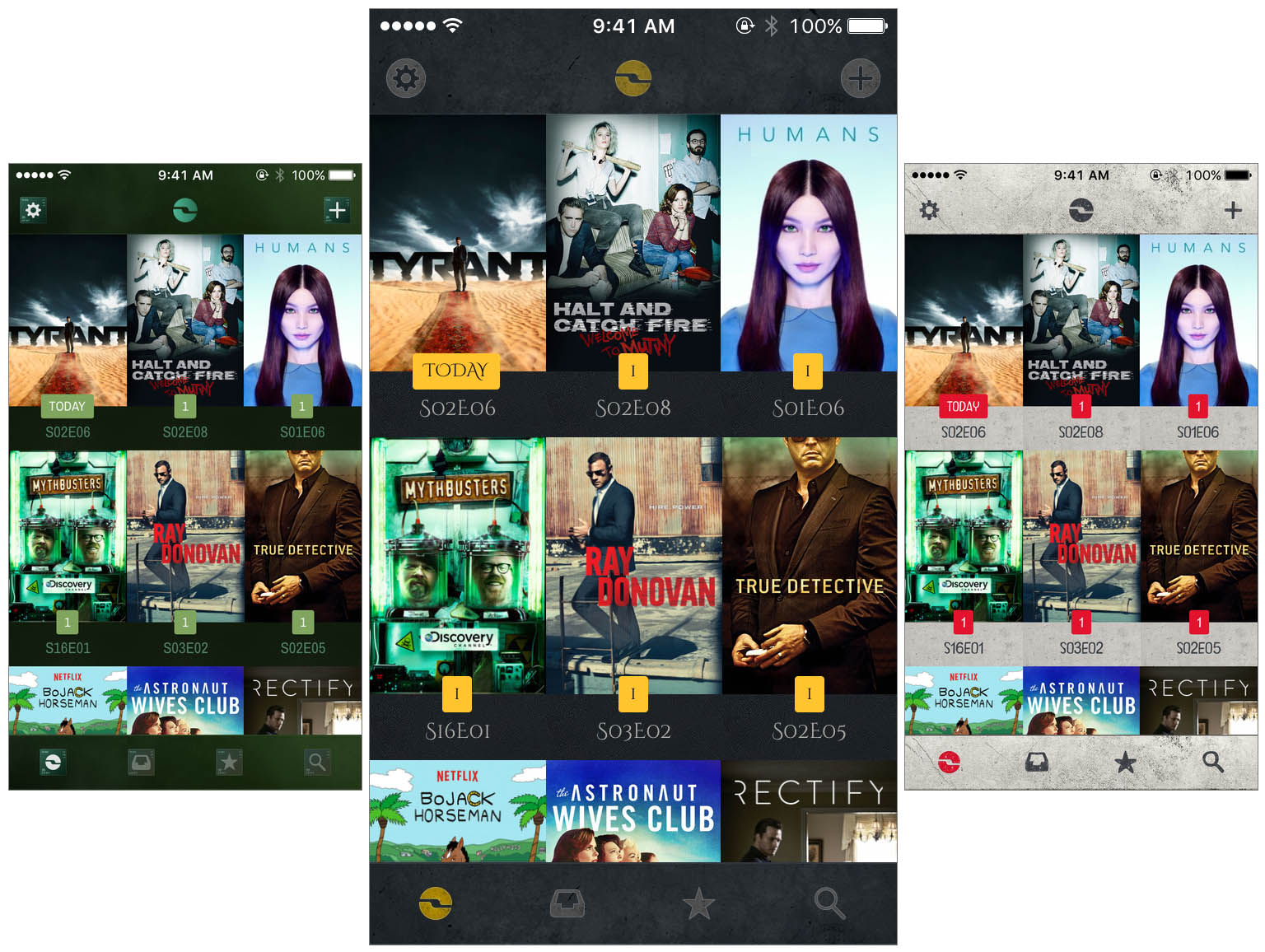 iShows has accomplished something impressive by being able to give users significant amount of control over the look and style of the app, whilst still looking fantastic. I’ve used iShows’ customization options extensively over the past few months and no matter what combination of options I choose, I’ve yet to find one that looks bad. In a sea of other iOS apps that are fixed in their design, it’s refreshing to be able to use an app that doesn’t just reluctantly give users some options, but embraces the idea of customization in a tasteful way.

Like any great app, there are still minor issues with iShows and features that have not yet been implemented that should be there. But there’s little doubt in my mind that iShows 2 is an extremely capable, beautifully designed and playful app that will be the perfect app for tracking TV shows for almost anyone.

iShows 2 is now available on the App Store.