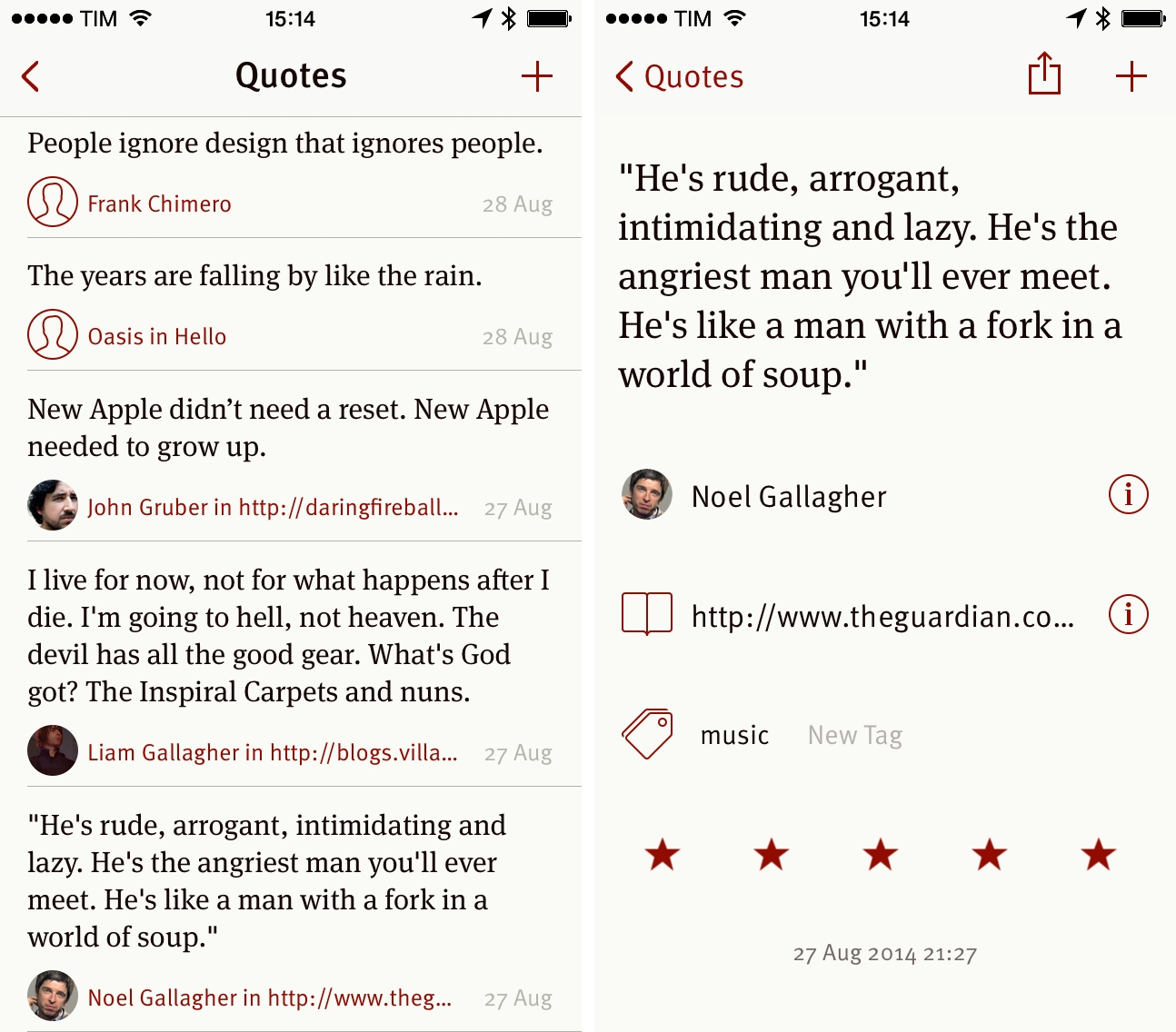 Quotebook, developed by the folks at Lickability, has long been my favorite app to save and archive quotes and passages on the iPhone and iPad. Over the years, I’ve tried several solutions to store quotes – I started with Markdown archives in plain text, moved to Evernote, and recently began using Instapaper Highlights, also connected to Evernote with IFTTT – but Quotebook kept striking me as one of those purposeful, well-considered apps that perform one task exceptionally well. I was especially satisfied when I realized that Quotebook had native Instapaper integration and could be connected to my feed reader of choice, Mr. Reader, to save quotes from RSS.

Yesterday, Lickability released version 3.0 of Quotebook as a free update on the App Store, bringing a new design, rewritten iCloud sync, and new features for quote creation and author navigation that make the app easier to use and better suited for large libraries of quotes and sources.

The new design is elegant and refined, with serif typefaces for quotes and red accents for authors, UI elements, and sources. I’m not particularly sad about leaving Quotebook’s previous skeuomorphic design behind – the new look may not be terribly original, but it feels right at home on iOS and, I believe, brings more focus to text and authors, which is what ultimately matters in the app.

A notable addition to Quotebook 3.0 is automatic completion of authors, tags, and sources with Wikipedia integration. When you’re adding a new quote and start typing the author’s name, the app will try to complete the field using information from your local music library, contacts, or from existing authors in the app; because authors are also automatically looked up on Wikipedia, after you manually type their name (like, say, “John Lennon”), Quotebook will replace their profile picture with one fetched from the web.

In my tests, this new system for authors and auto-completion worked well, with some exceptions. When I added “Noel Gallagher” to a quote I copied from Safari, the app suggested the author’s name from my music library (you can tell by looking at the artist icon appearing next to a suggestion), but it couldn’t fetch a photo from Wikipedia, even if tapping on Gallagher’s name actually opens Wikipedia in the app’s built-in browser. On the other hand, when I tried with “Liam Gallagher” the app both auto-completed the name and added a photo from Wikipedia, which also worked for John Gruber, John Lennon, and others. The revamped author and source creation process is a nice time saver, but I would like to see better integration with the app’s browser – for example, it would be nice to copy photos from Wikipedia and quickly assign them to authors without switching to Safari.

In the Quotes screen, you can now tap onto an author’s name and jump to more quotes from the author or open the source; if the source is a link, the app will offer to open it in the built-in browser. This simple addition considerably cuts down the time spent navigating around the app and it works well with the new profile pictures and red highlights.

There are other changes worth mentioning as well. The main screen offers random quotes that you can easily save to your library, which is nice, but I wish they were always sourced. Clipboard detection for quotes you’ve already copied has been improved, just like sync, which should be more reliable across devices. The app can now share quotes to Tweetbot, Day One, and Tumblr, and it can also import quotes directly from your Facebook and Tumblr accounts, which I haven’t tested as I mostly use Facebook for jokes. The app’s URL scheme has been enhanced with x-callback-url support, allowing you to chain Quotebook to other iOS apps (my old setup still works; see some new examples from Phillip).

Quotebook 3.0 is a solid update in which I noticed minor annoyances that don’t impact the good work that went into the new design, navigation, and quote creation process. I would love to see Quotebook natively support Instapaper Highlights someday, and I can imagine how iOS 8 could allow Lickability to build a sharing extension to easily save quotes from Safari or other apps. Today, Quotebook remains the great quote management app that it’s always been, with a better way to add and browse authors and a new design that makes it look fresh on iOS 7.

Quotebook is available at $4.99 on the App Store.