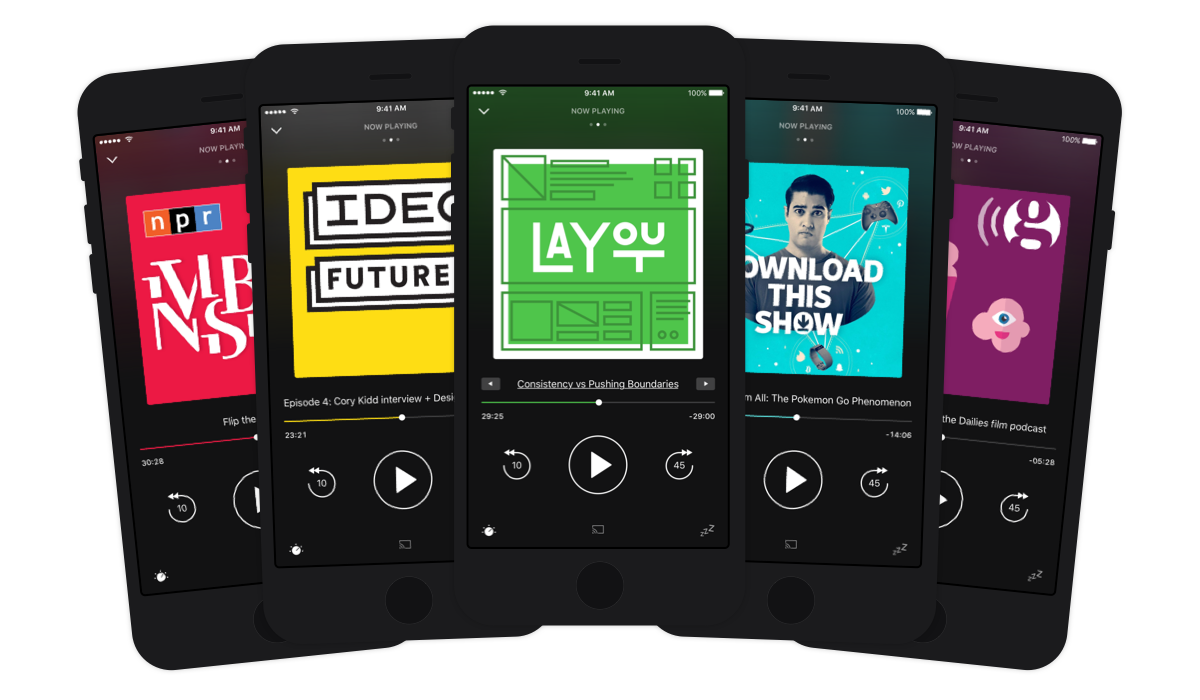 When it comes to podcast apps on iOS, we are really spoiled for choice. There are many options, but I would say that there are four podcast apps in particular that rise above the rest; Apple’s own Podcasts app, Overcast, Pocket Casts, and Castro. Narrowing that field of four to determine which is objectively the best is an almost impossible task from where I stand. Instead, which one is best will depend entirely on which app’s design and feature set most closely aligns with how you want to manage and listen to podcasts.

Keeping that in mind, just over a week ago was the release of a major new version of Pocket Casts. Now on version 6 for iOS, Pocket Casts is the podcast app that has been around the longest (out of those four listed above), first launching in January 2011. It’s also the one with the most cross-platform support, running on iOS (iPhone and iPad), Android, Windows Phone, and on the web.

So, what’s new in Pocket Casts 6? The tl;dr version is that the user interface has been redesigned in various ways, most notably with the addition of a dark theme and “up next” queue improvements. There are new audio effects to trim silences and volume boost for those podcasts which sound too quiet. The iPad version now supports multitasking (Split View and Picture in Picture), and whilst it isn’t noticeable to users, almost the entire app has been re-written in Swift.

Rather than a traditional review, I thought I’d dive in and highlight a few features of Pocket Casts that I really like. Not all of them are new to Pocket Casts 6, and some will also exist in other podcast apps. But the point is to encourage you to try it yourself, because you never know, you might just discover that Pocket Casts suits the way you listen to podcasts better than the other options. Besides, even if it doesn’t, you’ve only lost $3.99. Frankly, if you’re a fan of podcasts, this advice doesn’t necessarily just apply to Pocket Casts; you should take some time over the next few weeks to try Pocket Casts, Castro (a new version of Castro is also coming this month) and Overcast if you haven’t already. Each are made by fantastic independent developers and all of them are great apps.

Having chapters in podcasts is not particularly important to me, but it’s nice to have, particularly for those podcasts which go on for over an hour and discuss different topics. They allow the listener to easily skip past a section that doesn’t necessarily pique their interest, but also allows listeners to quickly re-listen to a section without spending minutes scrubbing backwards and forwards to find the start point of the relevant discussion.

Pocket Casts has excellent support for chapters. If the podcast you are listening to has embedded chapters, you’ll notice additional information and buttons appear above the scrubbing timeline. In the center will be the title of the chapter currently playing, with a left arrow and right arrow on either side of the screen, allowing you to jump directly to the previous or next chapter. Tapping on the chapter title will bring up a list of all the chapters and allow you to jump to any of them.

If the podcast has also embedded custom artwork for each chapter, such as Cortex #34, Pocket Casts will display that artwork in the Now Playing screen. It’s just a pity that this custom chapter artwork doesn’t appear in Pocket Casts’ mini player or on the iOS Lock screen or Control Center (for those on the iOS 10 beta). 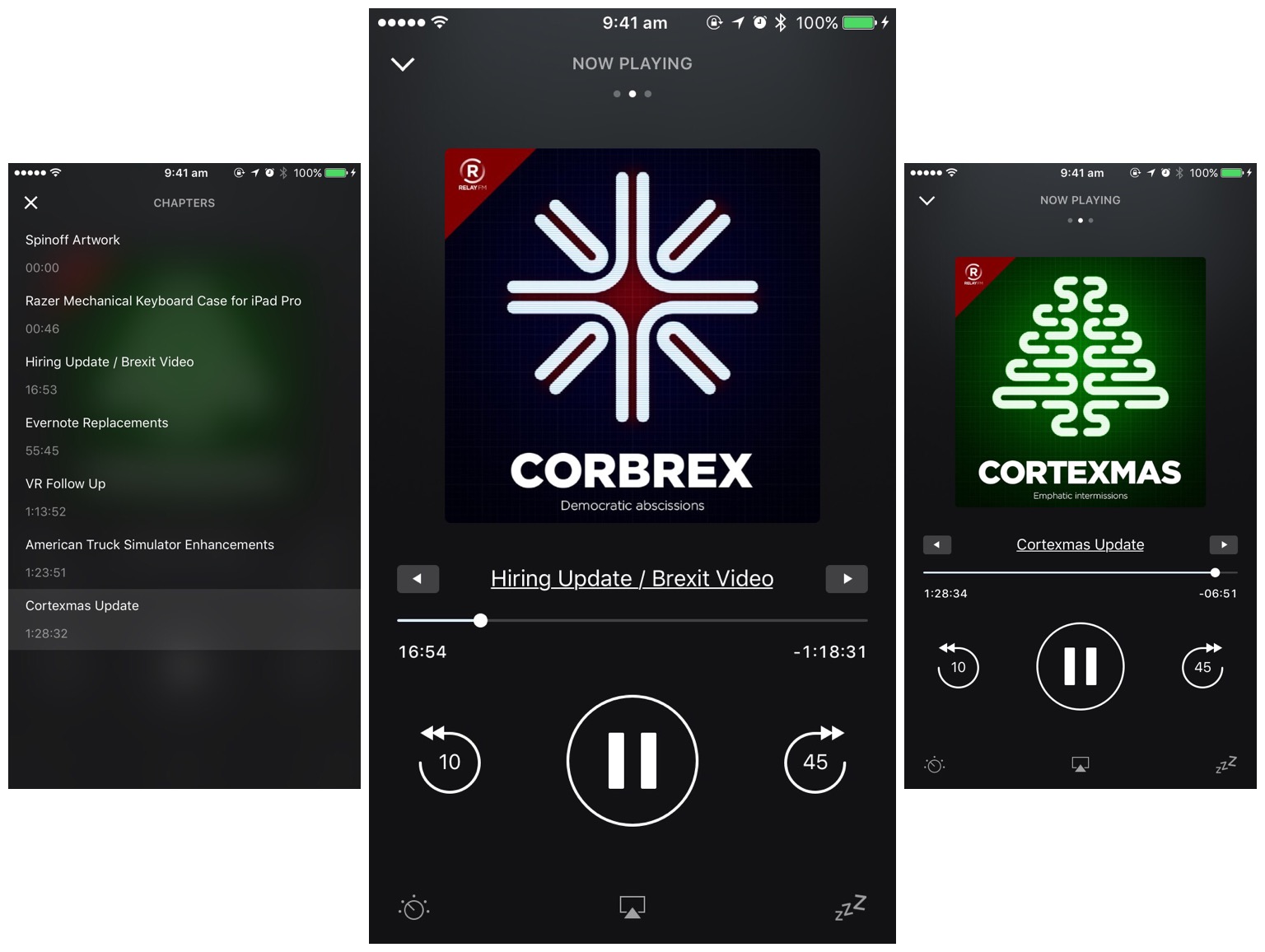 There is an ever-increasing smorgasbord of fantastic podcasts to listen to, so if you want to listen to a new podcast it can be quite difficult to know where to start. Fortunately, Pocket Casts offers a great Discover section which highlights a range of podcasts. My favorite aspect of the Discover section is the “Featured” carousel which is a hand-picked selection of podcasts – I’ve subscribed to a few podcasts highlighted here and haven’t been disappointed yet. Beyond that, there are also trending podcasts and the most popular podcasts, as well as podcasts from various networks (Gimlet, Relay.FM, Radiotopia, BBC, etc), and podcasts from various genre categories.

Unfortunately Apple is not bringing a system-wide dark mode to iOS 10, so I’m glad that apps from third parties like Pocket Casts and Overcast are continuing to implement their own dark modes. If you’re a fan of dark modes, I think you’ll like the one in Pocket Casts which has been implemented with great care. It will be a matter of taste, but I am a big fan of the color palette selected to be the dark mode for Pocket Casts, particularly with its hint of blue. 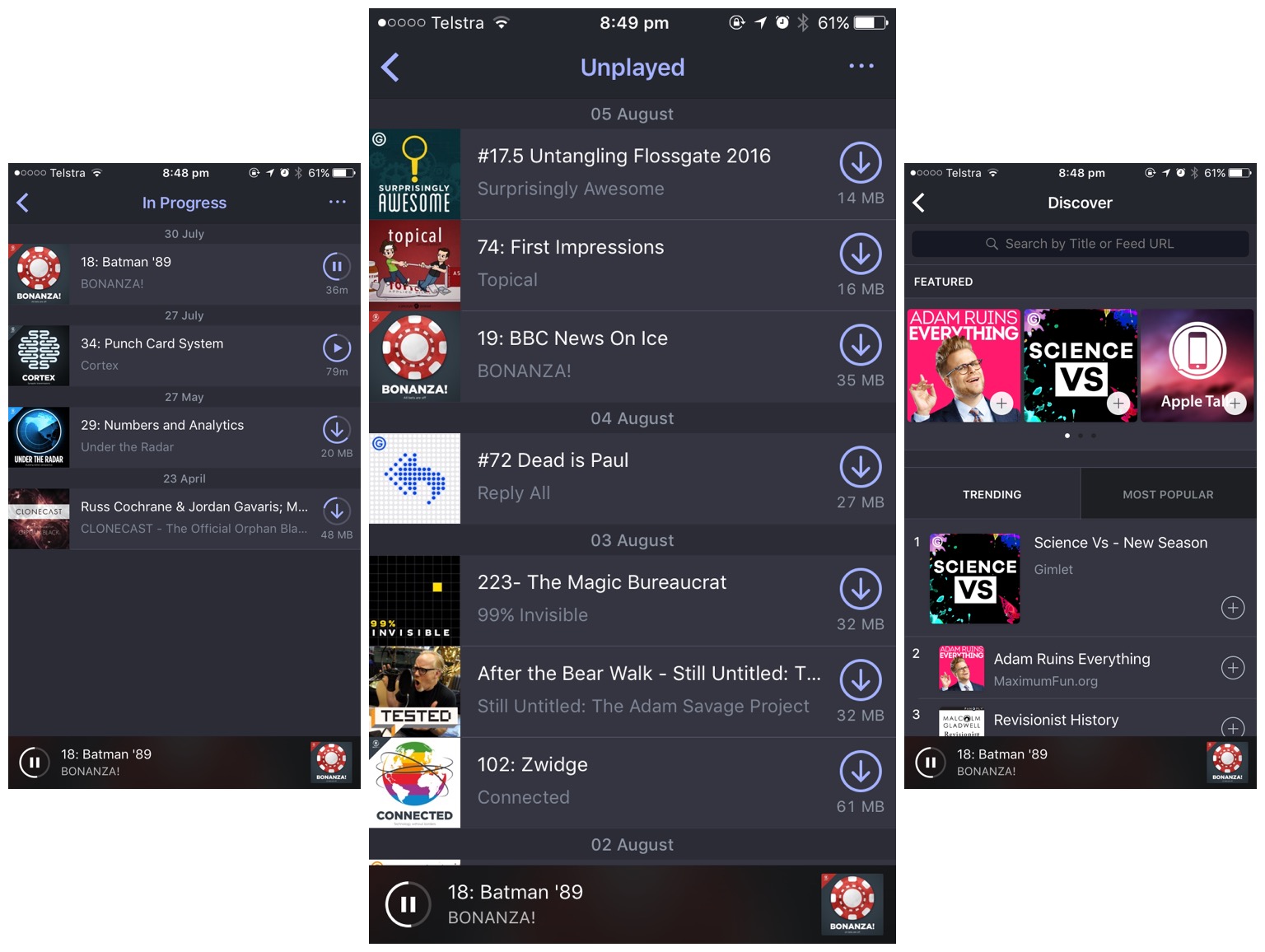 Whilst most of you reading this will be exclusively iOS users, I know a few of you will also own Android phones or use an Android phone occasionally. If that’s you, Pocket Casts will have added appeal because it also offers a great Android app. With a Pocket Casts Sync Account you’ll be able to sync everything from podcast subscriptions, filters, and episode progress across to any device with Pocket Casts. Plus, there’s also a Pocket Casts client for the web if you want to listen to your podcasts on your Mac or PC.

Pocket Casts 6 is a major new release with new audio effects (trim silence and volume boost), iPad multitasking, and a re-designed user interface. I’ve been testing and using Pocket Casts 6 for the past few weeks and I can honestly say that it has been an absolute delight to use. Above all, it was also refreshing to try something new and observe the difference in design and experience that Pocket Casts emphasizes over the other apps.

The last point I’d like to reiterate is that we have a great choice in podcasts apps between Pocket Casts, Castro, Overcast, and even Apple’s own Podcasts app. If you’ve been stuck using one app for a long period of time, take some time to switch it out with one of the others – all are free upfront except for Pocket Casts which is only $3.99. Be prepared for a bit of an adjustment period, but you may just find that one of the other apps is a better fit for the way you listen to podcasts.