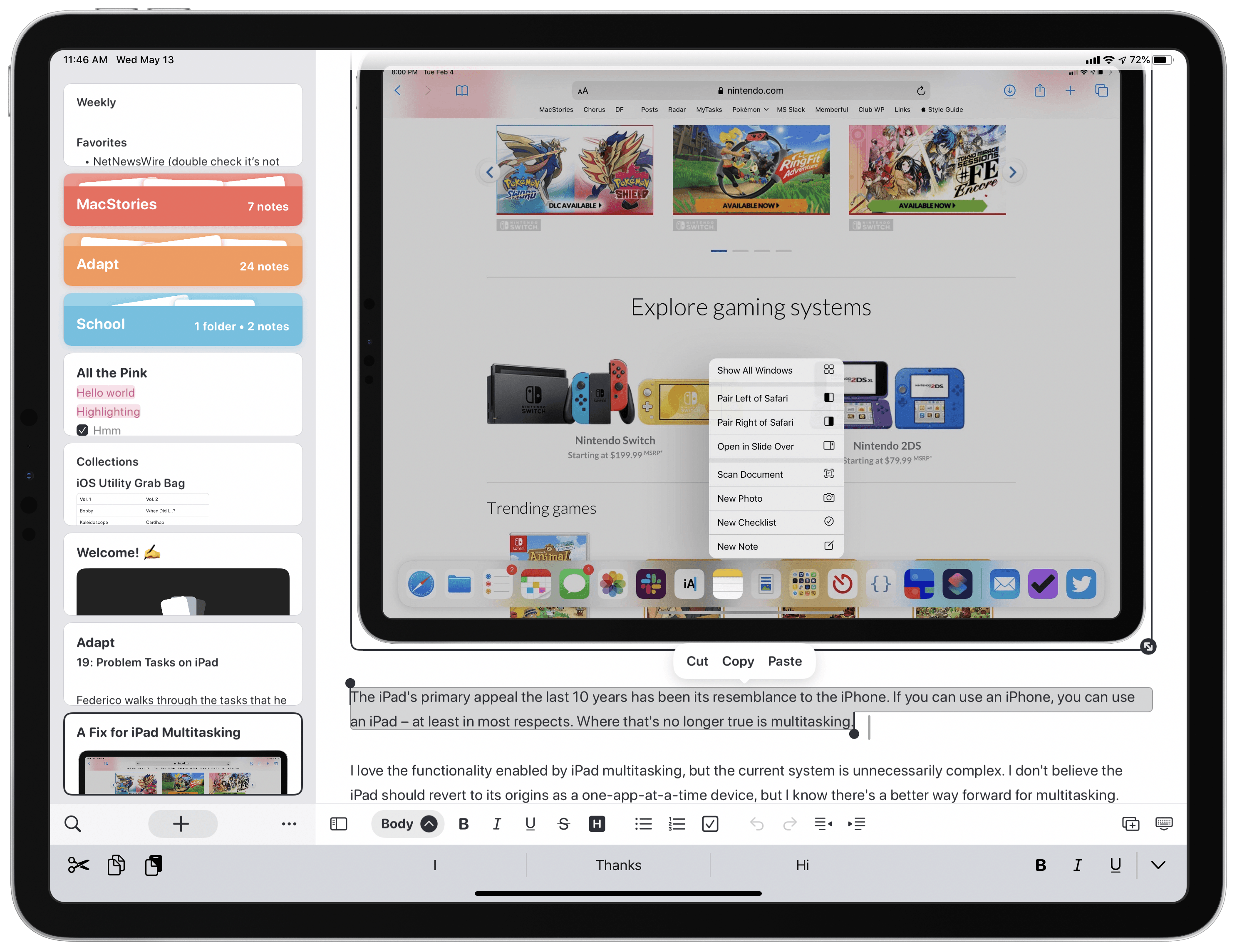 Noto, the modern notes app for iPhone, iPad, and Mac that I reviewed back in February, recently launched a 2.0 update that introduces brand new features and key fixes and enhancements. On the iPad, mouse and trackpad are now natively supported, and you can use drag and drop to easily import notes from another app into Noto. Additionally, the app’s syncing engine has switched from iCloud Drive to CloudKit, making it faster and more reliable than before. Finally, several of the issues I noted in my initial review have been resolved in this latest update.

Noto’s optimization for pointing devices on iPad means a variety of things: notes and folders in the sidebar menu will be highlighted and jump forward slightly when the iPadOS cursor hovers over them; the cursor will morph appropriately between a selection circle and a text insertion line as needed; and you can use two-finger swipes on a trackpad to navigate between a note and your note list when working in Split View, or to enter note selection mode when you perform a right-to-left swipe in the note list. 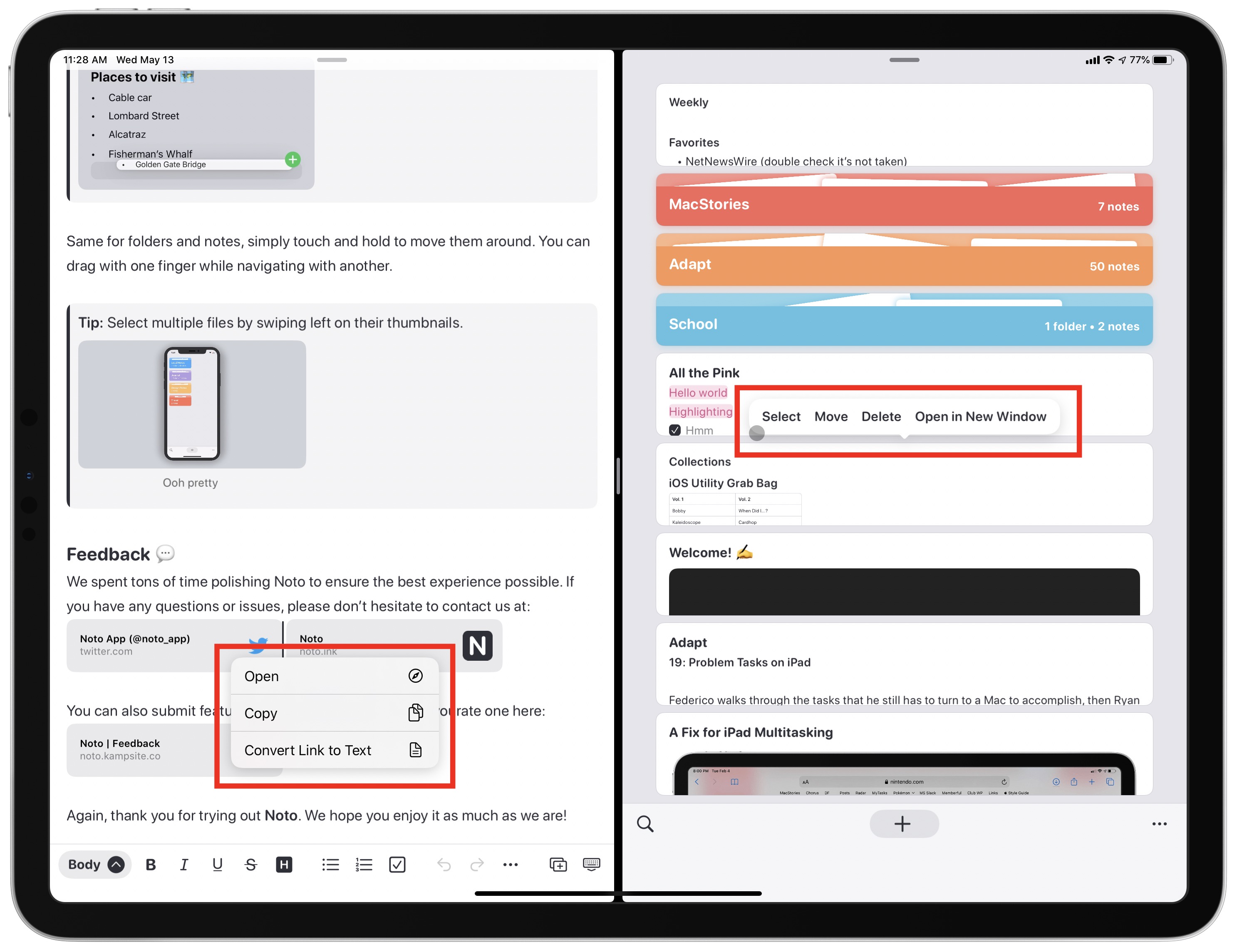 Cursor support also enables loading context menus with a right-click, but the experience here is inconsistent due to Noto utilizing custom menus in certain parts of the app. If you’re inside a note and right-click on a link or document, you’ll see a traditional context menu with options to open the link or document, and for a link you can optionally copy it or convert it to text. However, every other type of content I’ve encountered uses a non-standard context menu, and the ways you cause that menu to appear are varied. For example, with images, videos, and drawings inside a note, Noto’s custom menus can be invoked with a left-click on the content rather than a right-click. But if you’re in the notes list and want to access the menus associated with notes and folders, the solution isn’t a standard click, but rather a left-click and hold, which replicates a long-press via touch.

I’m glad that all of Noto’s context menus can be accessed via the cursor, but the experience has to be streamlined. All of these menus need to be accessed via a right-click, as is standard in every other app. It’d be nice if the design of menus was unified too, so that there aren’t both custom and first-party menus employed, but that’s ultimately of lesser consequence. The main thing that matters is offering a unified experience no matter what type of content you’re working with.

Importing with Drag and Drop

One of the biggest barriers to using a new notes app is transferring data. Most notes apps, especially those that are still new to market, don’t offer built-in methods of importing notes from other apps. I mentioned this in my initial review in the context of Noto’s lack of Shortcuts support. Despite having no native import feature, if the app offered Shortcuts integration there would still be automated ways for users to copy their notes from another app. While Shortcuts support still isn’t available in version 2.0, Noto offers a nice alternative in the form of importing via iPad drag and drop. 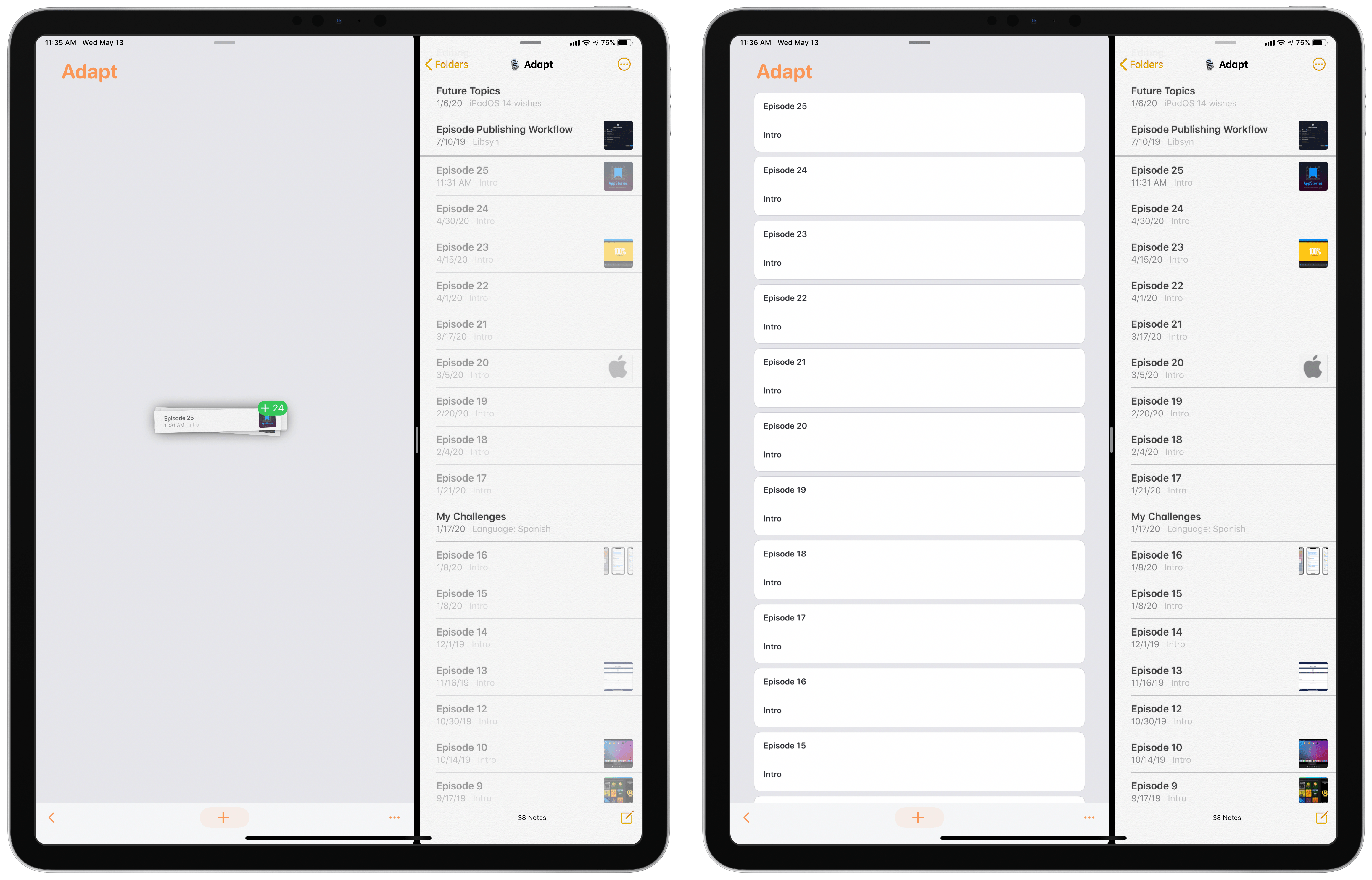 The new import option enables dropping MD, TXT, RTF files and more into Noto to have them automatically imported as new notes. The great thing about this is that iPadOS enables dragging and dropping multiple files at once, so you can, for example, pick up a stack of 10 or more notes from Apple Notes and in a single gesture drop them into Noto to have them instantly imported. In my testing Noto did a great job retaining the formatting and different content types from Apple Notes, even when I tried it with a stack of 50 notes at once, but depending on the file type you’re importing it may perform differently.

CloudKit sync. Noto previously relied on iCloud Drive for its sync engine, which wasn’t bad but it also wasn’t as fast or reliable as the syncing that’s available now thanks to CloudKit. Though it’s hard to comment on the long-term strength of the new system after limited use, CloudKit-based syncing has been extremely solid for me in every other app I rely on that uses it, so I would expect nothing but the same here.

Reordering notes. One critique in my initial review is that there were no settings available for how your notes were sorted. Though Noto could still stand to add such a settings panel, one nice change in 2.0 is that you can reorder notes manually via drag and drop, so even though the default behavior of sorting by last edited remains unchanged, you can at least re-sort things manually yourself as desired.

Drag and drop for images and videos. In addition to drag and drop enabling easy importing of notes from other apps, you can also now use drag and drop to add other types of content into the app, such as PNG and JPG images, or MP4 and MOV videos.

Keyboard shortcut fixes. The problem that most plagued me in Noto’s prior version was that keyboard shortcuts involving the Command and arrow keys didn’t work properly. As I explained:

Command-Left/Right Arrow does not take you to the start or end of the current line, nor does adding Shift make the full line selected. Instead, Command in Noto works similar to Option by navigating the cursor a single word at a time.

These two issues have both been resolved in the latest update. As such, the only outstanding shortcut issue I’ve noticed that remains is that you can’t reverse indent a list item via the keyboard, which fortunately isn’t nearly as big a problem for me as what’s been fixed.

It’s always difficult to give a new notes app a fair trial since the labor cost of manually importing your notes from elsewhere is too much to ask, but now thanks to drag and drop that’s no longer a problem for Noto. Even if I set out to import my massive 1,500 note collection from Apple Notes, I don’t anticipate it would take very long. This makes Noto 2.0 an excellent time to give the app a try.

Just over half a year since its launch, Noto has grown into one of the most compelling note-taking apps on Apple devices. Though there are certainly more features that could be added in the future, the app feels surprisingly feature-rich already and thoroughly modern. And since it’s so young, I expect Noto’s future is bright.

Noto is available on the App Store for iPhone/iPad and Mac.