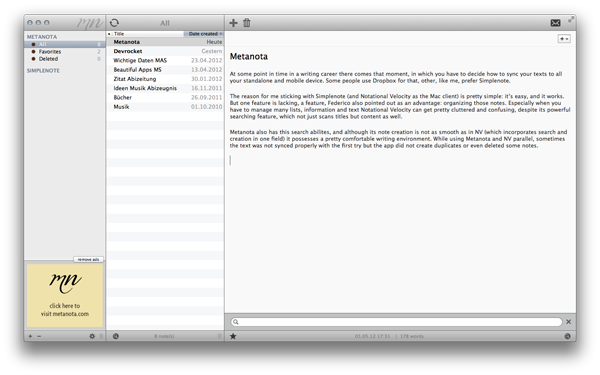 At some point during a writing career there comes that moment, in which you have to decide how to sync your text to all your devices. Some people use Dropbox; others, like me, prefer Simplenote. Metanota is a “new & noteworthy” OS X client for Simplenote which enhances the service’s feature set with different organizing possibilities on the desktop.

My reason for sticking with Simplenote (and Notational Velocity as a Mac client) instead of Dropbox is pretty simple: it’s easy, and it works. There’s a feature, however, that’s lacking in Simplenote – a feature that Federico also pointed out as an advantage of Dropbox: organizing your notes. Especially when you have to manage many lists, information, and text, Simplenote through Notational Velocity can get pretty cluttered and confusing, despite its powerful searching feature, which doesn’t just titles but content as well. Often, I get overrun by my own notes.

Metanota has decent search abilities, and although its note creation is not as smooth as in NV (which incorporates the search and creation features in one single interaction), it possesses a comfortable writing environment. While using Metanota and NV in parallel, text was not always synced properly with the first try, but the app did not create duplicates or deleted notes. Its design isn’t really pleasing, but it’s functional and serves the basic needs of a good note-taking app. Metanota can sync automatically every 20 seconds, 60 seconds, 5 minutes, and 60 minutes; with automatic sync in the background, notes were quickly synced to the Simplenote web app running in my desktop browser. Notes deleted on Simplenote’s website were deleted automatically on Metanota, and, similarly, updates made to a note from the Mac app were saved as “versions” on Simplenote’s website. 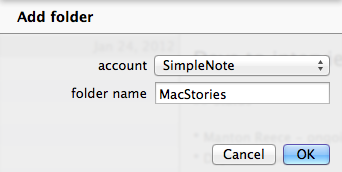 I want to focus on the most advantageous feature the app has to offer: sorting notes in folders. Simplenote itself features note tagging — these tags are also shown in the sidebar and on top of any tagged note in Metanota as folders. I believe tagging is not incorporated well in NV, where you just can sort notes after their tag, but not list only those notes with a specific tag with one click. Metanota imports Simplenote tags and allows you to create your own “folders” in the sidebar: these will be synced to Simplenote as tags, but Metanota doesn’t (surprisingly) lets you drag & drop notes between “folders”.

Overall, Metanota is a visually well-arranged Simplenote client with the biggest feature in its two sidebars. It more or less seamlessly syncs with the Simplenote service, it offers some nice features to cope with a large amount of notes and with the task of organizing them, but it doesn’t come with more advanced features such as Markdown support or keyboard shortcuts.

You can try Metanota for free on the Mac App Store (the built-in, unobtrusive ads can optionally be removed through a $9.99 in-app purchase).