There are many applications both on Mas and iPhone which let you manage your Flickr account without accessing the web interface. Because you know, I don’t like Flickr web app so much: sure, it’s better than Facebook and Twitter, but compared to any good Mac application, it doesn’t make it. But I think this is common problem to many webapps out there.

Anyway, I’ve been wondering for months whether there was a Mac app to entirely manage my Flickr account from my desktop. Then, I met Flickery.

In this article I will outline the great features Flickery has, and how it could become one of your favorite Mac apps.

And guess what, we even got 5 copies to give away. 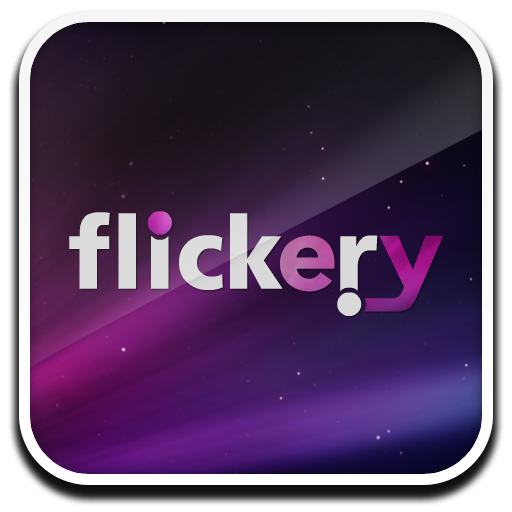 Flickery is a complete Flickr client for Mac. You can do almost everything Flickr lets you do except deleting photos, just as every Flickr app out there. I’ve never understood this limitation, but that’s it. Anyway, once you’ve downloaded and fired up Flickery you’ll have to authorize the application via flickr.com (there’s no username / password system) and they you’ll be ready to use Flickery. 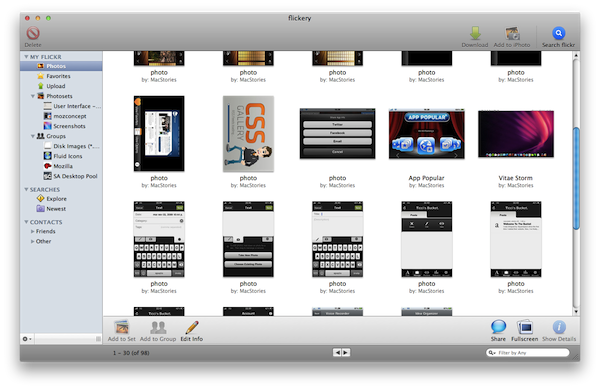 As you can see Flickery has a native Mac OS X looks and, trust me, it feels like every other Mac app: there’s a left sidebar which lets you browse your flickr account and a bottom toolbar with some buttons I’ll talk about later. The sidebar is organized into 3 main menus: My Flickr, Searches and Contacts. From these 3 dropdown menus you can manage your flickr photo / photosets, access groups, browse flickr and view your contacts.

Then, you can upload photos. Let’s start from this: the upload interface is both simple and powerful, allowing you to enter a Title for your image, Description, Tags, Content Type and License. You can also set the visibility to Public, Family, Friends and Exclude from searches. If you use Flickr as a repository for your photos the exclude feature will be your dream come true. 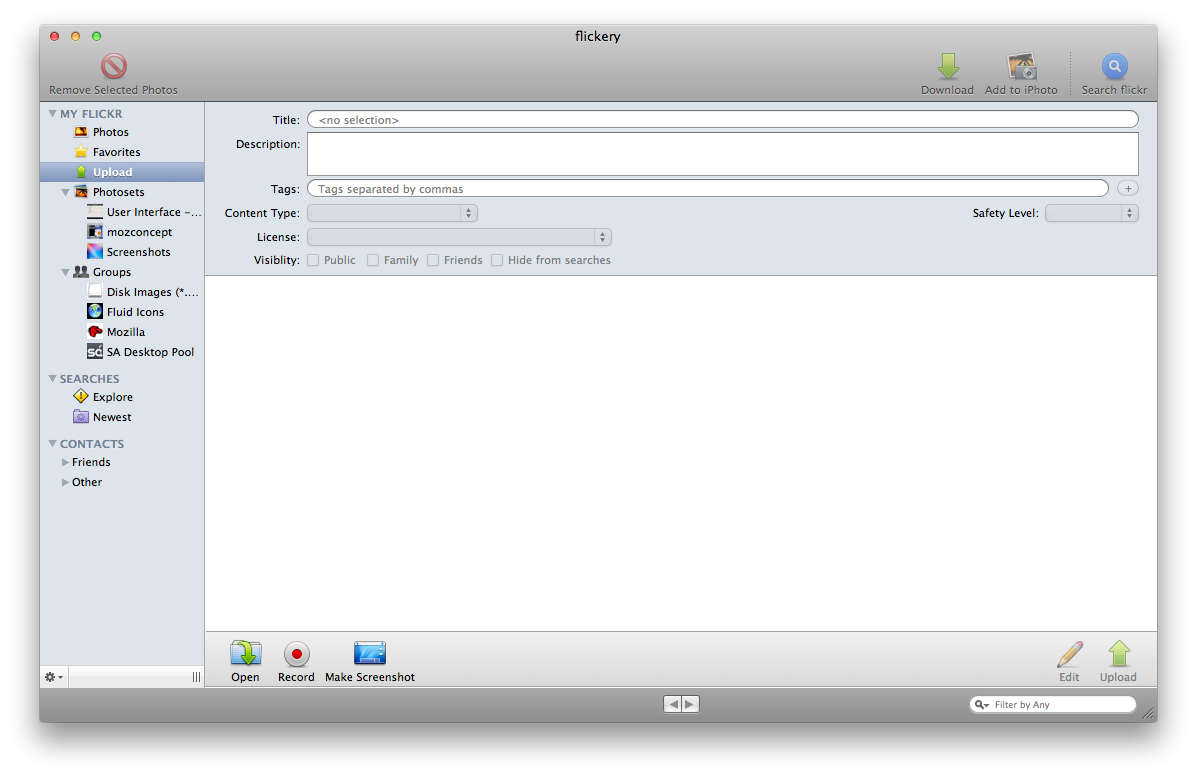 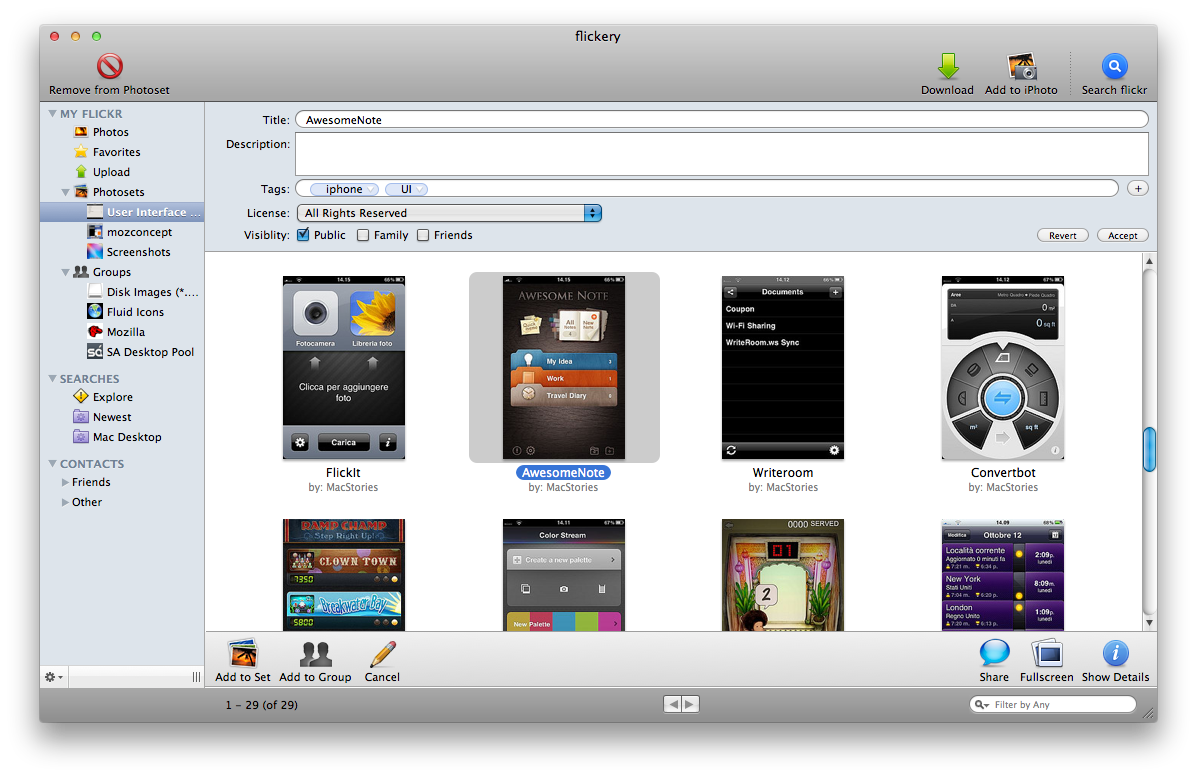 With Flickery you can upload photos from your Mac, record a video with your iSight and take a sceenshot on the go. There’s no QuickTime support yet for recording videos, but hopefully the developer will implement it soon. 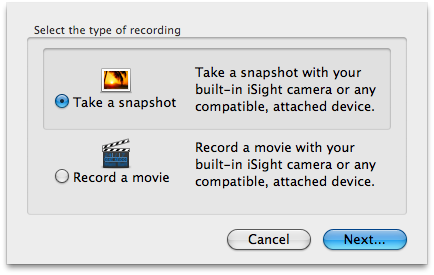 Moving on, you can edit the details of every photo as you scroll the photostream and add a photo to a photoset, group and to your favorites. You can share pictures, enter fullscreen mode and view further details for each photo. That’s what the toolbar buttons were about. 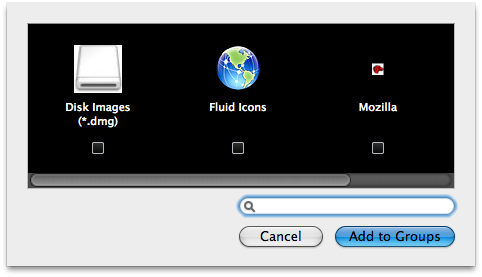 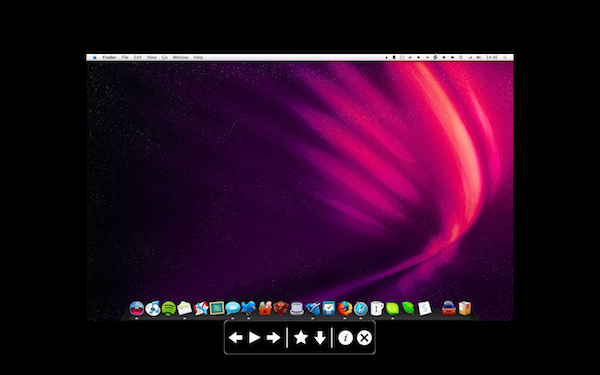 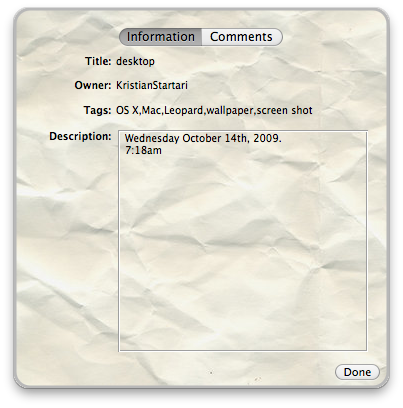 The Show Details menu is awesome and useful, a feature that many Flickr clients miss and developers ignore. Flickery lets you view comments on the go, and that’s very important to me.

Just like ViewFinder, Flickery lets you search photos uploaded to Flickr. You can enter keywords, tags and usernames and - again - enter fullscreen, add to favorites, etc. If there’s a great thing in Flickery, is its consistency: everything works the same everywhere in the application, no strange icons or different menus.

Now, I found Flickery just perfect for me, but I believe the application depends on how much you use Flickr: if you upload 3 pictures a month, Flickery is useless. This app is meant for medium / hardcore users of Flickr, providing a great set of features together with stability and some Mac eye-candy too. Last, a single user license costs $19, which is a really affordable price.

If you love flickr and you have a Mac, Flickery will become your new favorite app.

Thanks to Eternal Storms Software, we have 5 licenses of Flickery up for grabs.

I’ll pick up the winners on Friday, November 13th.