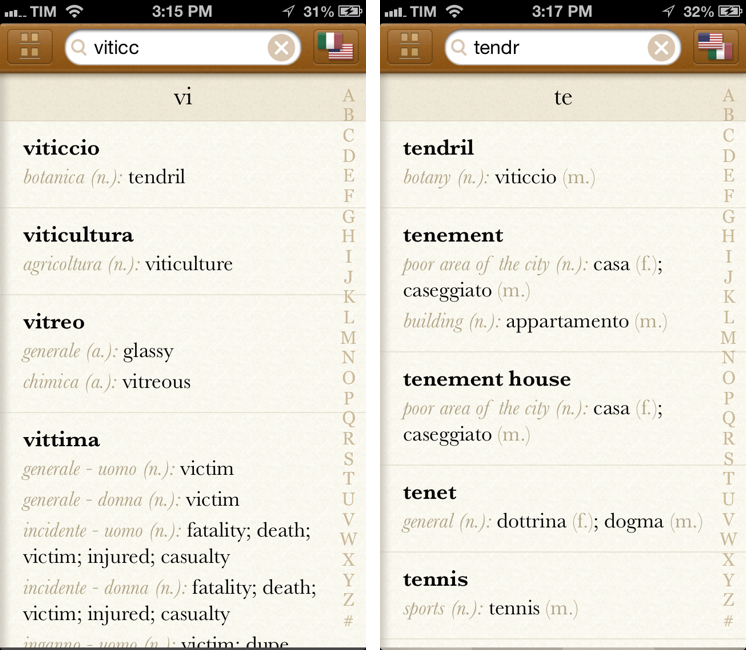 Can an offline translator for iPhone be beautiful?

Translations are boring. Even Google, which has put some effort into caring more about its appearance in the past year, has seemingly forgotten that Google Translate is used by millions every day. Not only is Google Translate outdated from a design perspective, it also doesn’t take advantage of the trends and interactions that have recently defined great mobile experiences.

Languages is an offline dictionary for iPhone available at $0.99 on the App Store. For a dollar, it offers offline translations for the following language pairs:

Whereas most companies charge around $5 for offline translators that are essentially web views inside iPhone apps, Tapity and Sonico designed a truly mobile experience that wouldn’t make sense on any other platform. In Languages, multi-touch isn’t an afterthought.

I might as well call Languages a multi-touch translator, but I recognize how the offline aspect gets the spotlight. The app starts in a library bookshelf view with dictionaries presented with custom covers for their language. Languages is meant to be fired up for the first time when you’re at home, as it’ll first ask you to download a dictionary in its entirety for offline translations. After that, the dictionary will be stored offline, ready to be accessed at any time. 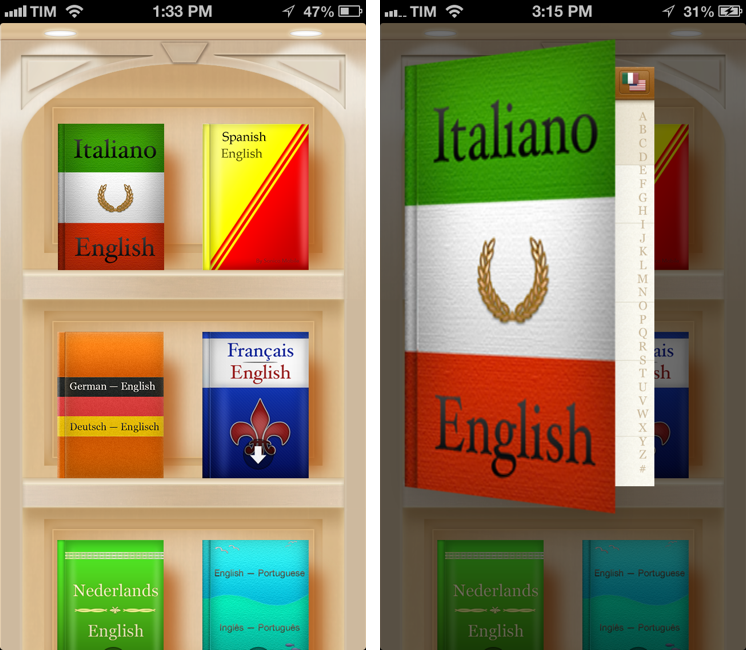 I can see why offline is a big deal for Languages. The app will likely be used more while on the go, when 3G data is limited, or, even worse, in a foreign country, where roaming data plans are typically ridiculous. Dictionaries that haven’t been downloaded yet will have a download icon on top of their cover.

As I said, however, multi-touch plays an equally important role in Languages. Rather than forcing dictionaries to behave like iPhone apps, or building the app first then trying to make it work for a translator, Tapity and Sonico created something that feels natural and unique both as a dictionary and a modern iPhone app.

In the Library, you can tap & hold a dictionary to rearrange it on the shelves; the app’s own Options are presented as a book, too. You can also pinch to close a dictionary while going back to the main library. When you tap on a dictionary, you’re taken to the main word-browsing view.

Rather than choosing to make search the default view, Tapity went with browsing. The choice is justified by a custom A-Z index the app is using to let users quickly jump to a letter or syllable they need. There are various aspects of this implementation to consider:

It’s a bit disorienting at first, mainly because, by default, iOS apps that implement the A-Z index scroll the view when you’re swiping your finger on the letters (think contacts in Address Book). Tapity’s take, however, makes sense when you consider the potential of finer syllable selection, which I’ve found very handy. Too, the animation of the A-Z index is neat in that letters “wrap” around your thumb if you’re right-handed. 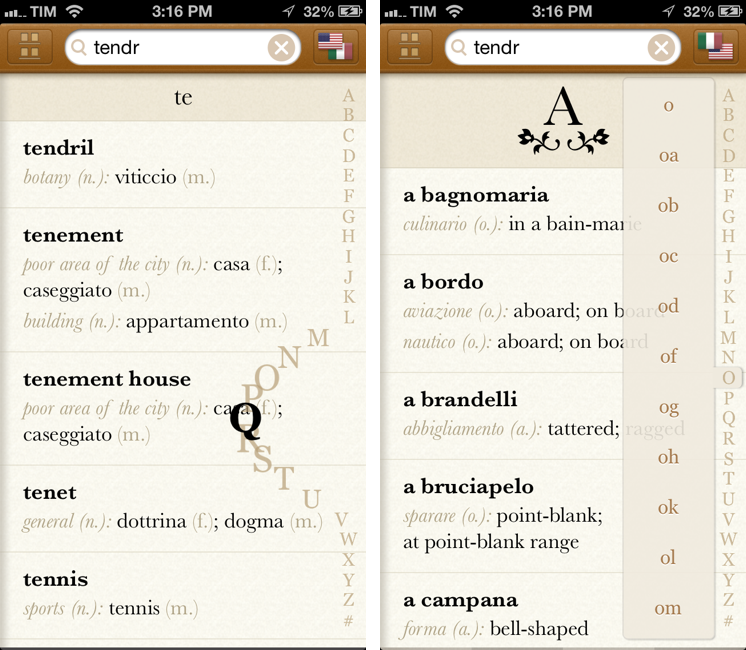 The list view resembles a real dictionary in color tones and typographic choices, but it doesn’t try too hard on skeuomorphism. It’s an elegant iPhone app that leverages the real-life resemblances as an element of familiarity, not a rule to abide in every UI circumstance. First and foremost, Languages is intrinsically digital.

Take scrolling for example. When you’re flicking through words (which are organized by letters and syllables), you can tap (not tap & hold) on a word (or its translation) to instantly bring up the copy menu. This is particularly useful to copy words that you want to assemble in a sentence somewhere else. When you a select a translated word, an additional “Jump To” option is added to the Copy menu, allowing you to quickly get to the other dictionary and the opposite translation for the word. And when you do hit Jump To, the language pair icon in the upper right corner elegantly switches languages with a cool animation. I like the attention to detail of Languages.

Search is where things starts getting really interesting. If you tap on the search field, you’re brough to a screen on the left with a “folding” animation; you can get to this screen also by swiping right on the main list. 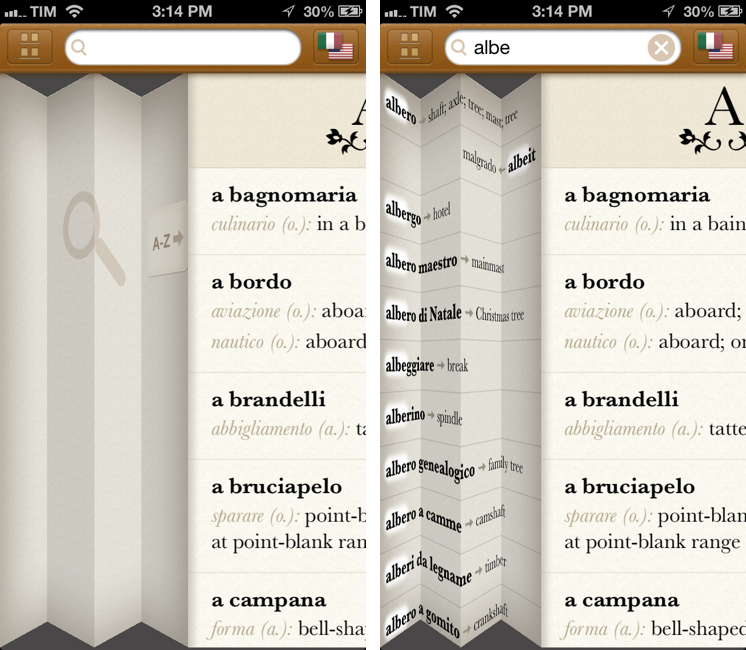 Search is unified, meaning that you can look for words in both languages: if a word belongs to the opposite dictionary you’re currently translating from, words will be placed on the other side of results. You can tap on the aforementioned flags icon to swap results, and you can tap a word to instantly get back to its position in the list view. Search is fast (everything is cached offline, so it doesn’t have to contact a server), and I like how I don’t have to switch modes.

Tapity thought of a clever way to clear searches, too. Languages displays multiple results, highlighting letters that match your query in real-time. As you type, results are refined until you get the specific word you’re looking for. To clear a search, you can reach out to the small x button in the search field, or better, you can just swipe right to bring up a “clear sidebar” that will remove your search when you release it. In my opinion, this is way better than having to tap small “clear” buttons in the interface; there is also a subtle visual hint in the search field to suggest you can clear a search by swiping. 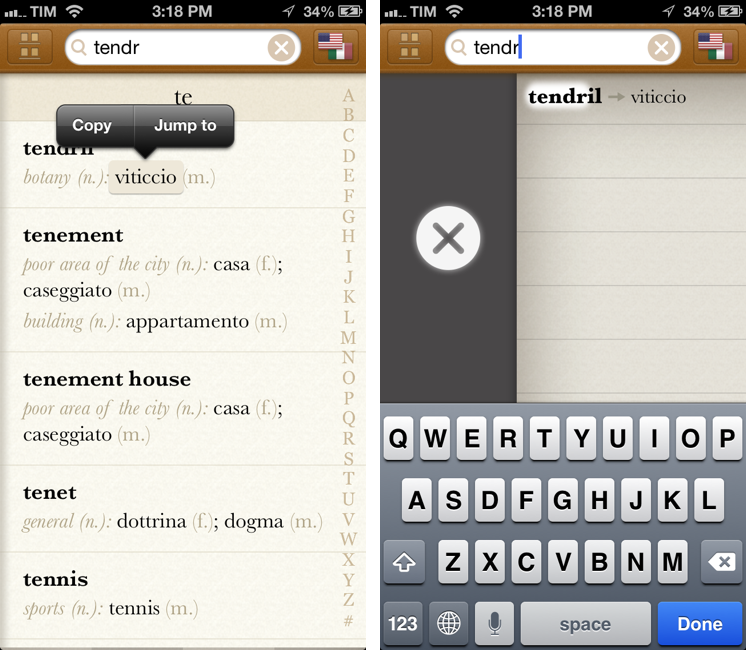 As you can imagine, I tested Languages with the Italian > English translations and vice versa. Languages’ word database is rich, but not huge right now. However, the partnership between Sonico and Tapity has allowed the developers to build commonly used phrases – not just words – into the database. This is a great addition as it reflects the way people talk and communicate, not necessarily their vocabulary knowledge. It is a good start, and I am confident Tapity has already thought about adding inflections, verb conjugations and all those other variations and irregularities Neo-Latin languages such as Italian have. I look forward to seeing more commonly used expressions that, perhaps, Sonico and Tapity could poll from Sonico’s excellent iTranslate. I also think Tapity could play around with the idea of letting users quickly jot down multiple words together in a temporary “scratchpad” to build complete sentences: copying words in Languages is easy, and the feature could come in handy for, say, tourists asking for directions or information.

I like Languages because it doesn’t try too hard to be a dictionary: it doesn’t have fancy page-flip animations, or heavy textures for paper and leather. Languages is an app – a piece of software that makes translating words better because, unlike paper, software is smart. Tradition isn’t Languages’ goal, it’s the starting point. Like the best iOS apps, Languages uses conventions to build something fresh, intuitive, and new.

Languages is a lovingly designed app with a fantastic attention to detail. And on top of that, it’s useful. Get it at $0.99 from the App Store.