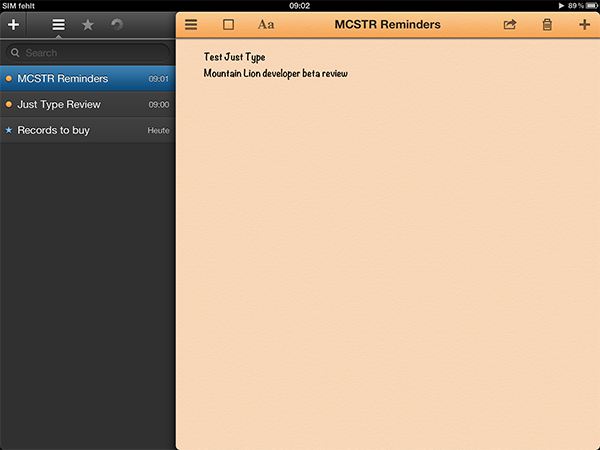 When it comes to notetaking, I’m a Simplenote guy. I work a lot on the road and love typing on my iPad, so I need a syncing service to have all my notes constantly updated on all my devices. Apple incorporated iCloud syncing in their own Notes.app in iOS 5, but I totally detest the app’s interface and standard note typefaces like Marker Felt, or please forgive me the mention, Comic Sans (not in Apple’s notes app of course, but in really bad third-party ones). When I discovered Just Type by Shubham Kedia on Beautiful Pixels yesterday I also immediately checked, if it has any cloud syncing service, and yes, it’s iCloud compatible, but there is no Simplenote support. Because of this, at first didn’t want to test it at all, since I use apps after the “never touch a running system”-method —meaning I’m always afraid when switching from a reliable app to a new one. After some investigation of app screenshots, I decided to install it on my iPad, and thank god I did. Its UI contains some of the best graphic elements I’ve ever seen (Just Type is an universal app, but I’ll only cover the iPad version today). 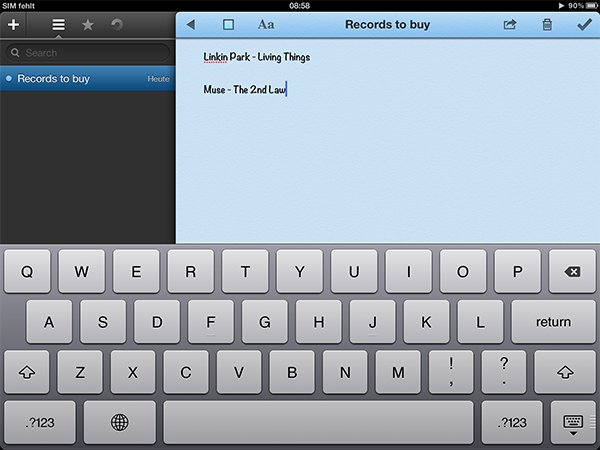 At the first launch, you’re greeted with the app’s main and only screen, styled in a paneled layout with a sidebar containing all your notes and a main typing area, which can also be toggled to full-screen mode via a list button. Tap the plus button in the top left corner of the sidebar (or the top right if you’re in full-screen mode) to create a new note and start typing. The notes are by default coloured yellow and the app uses Noteworthy (one of those bad note typefaces) in bold 16pt as its standard setting. You can change the default settings in the Just Type area of the system wide settings, while font and color for for single notes using a hot drop down menu (see below). In my opinion, it would’ve been easy to allow changes to the default settings in this menu as well — there is enough space left on the screen for som extra button and you would not have to switch out of the app at any time. 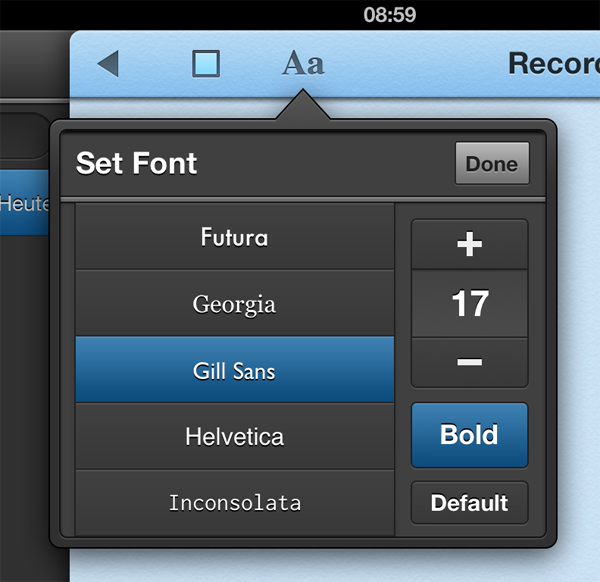 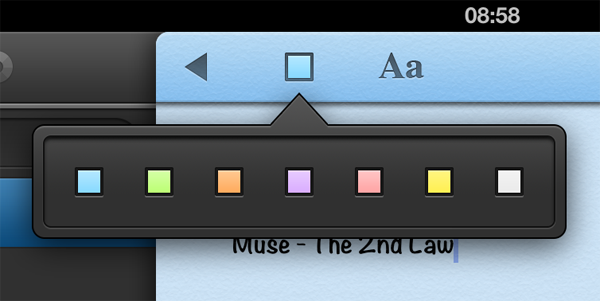 Using this top nav bar in the typing area, you can delete notes, and share them via an integrated iMessage window, copy the text for use in other apps, and print it via AirPrint. After you’ve created multiple notes, they can be sorted in various ways. You can star them as favorites to display the most important notes in a separate list. Change the color to indicate several areas like work, private and topic-related notes and let the app just display single colours in the third available list view in the sidebar (indicated by a rotating circle). I personally don’t like the colours that much (the typing area has been a bit skeuomorphed – Just Type offers the same colours “real” post-its use to have). I’d like to see custom colors and tags like “work” attached to them to identify them easier. However, you can quickly live search through your notes to find just the one you want. 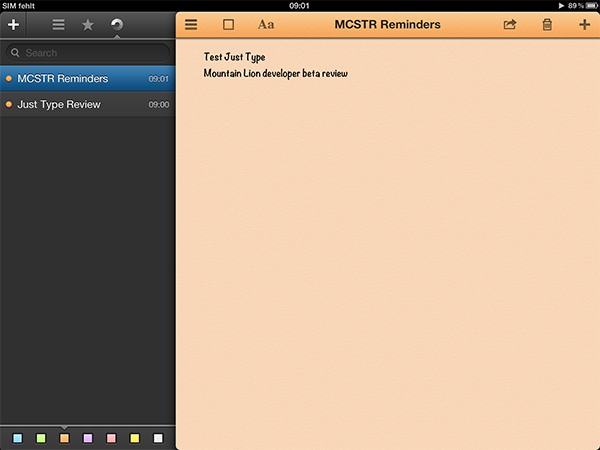 These are all the features of Just Type; it is a plain simple and easy note-taking app. So let me talk a bit about its UI: the reason why the app nevertheless gets reviewed here. As I mentioned earlier, the app users a simple paneled layout to allow note organisation in a sidebar and still feature distraction-free full-screen typing. What is one of the most fascinating feature is the seamlessly designed transition between the opened sidebar and the full-screen view. Instead of sliding to the right, as it is standard in apps like the native Twitter app or the new Spotify iPad client, the main typing area smoothly shrinks itself and every UI element together to allow the sidebar to become visible. This effect creates a very warm and friendly user experience and also gets continued in the sidebar itself: single notes in the list can be moved to the left and right to star them as favorites or delete the respectively. This kind of interaction feels a bit like the pull-to-refresh feature in social apps, and also has elements of the “more options” animation when sliding over list elements in Mail, Sparrow or Tweetbot. 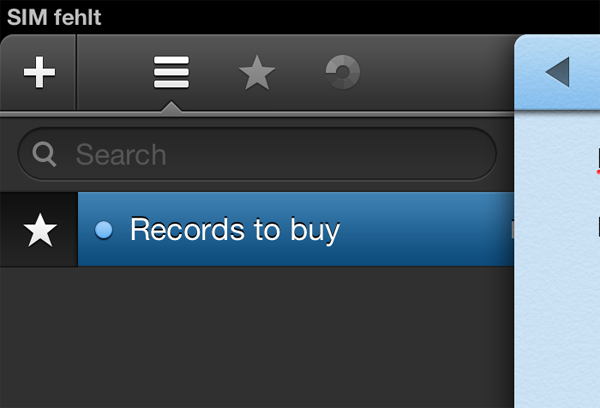 Still, Just Type is not suited for me. It is a possible alternative to Simplenote, but it needs sync options with the service across all devices — there is currently no Mac or online viewing possibility like when you’re using Simplenote. But if you use your iPad or iPhone as devices, that are more or less independent from your computer, and you own an iCloud account, the app is a serious candidate to replace your current note-taking app. Just Type is recommended, if you’re still looking for a good note taking alternative, and free to try in the App Store.