There are definitely a lot of new kids on the block nowadays. For the iTunes alternatives, we don’t have to look farther than Ecoute and Everplay for smaller solutions, and Songbird and doubleTwist as full library / syncing replacements for our multitude of devices. With doubleTwist making a name for itself with its ability to sync to the Droid (including recent Podcast and Amazon integration), one more player has stepped into the field that’s currently open to the public. Instinctiv syncs playlists to my Droid, shuffles music to my mood, and is a rather simple solution for playing and searching your music.

I tout Instinctiv as an alternative to doubleTwist, rather than an iTunes competitor, because of Instinctiv’s ability to connect to a multitude of mobile devices. If you’re immediately curious, unfortunately (or fortunately) I am a Droid owner in need of the ability to sync my music and podcasts from iTunes. While I’ve been relying on playlists and doubleTwist to do the job for me, I’ve been toying around with Instinctiv as of late. While it’s still a little rough around the edges, it works fine for syncing music to my anti-iPhone. 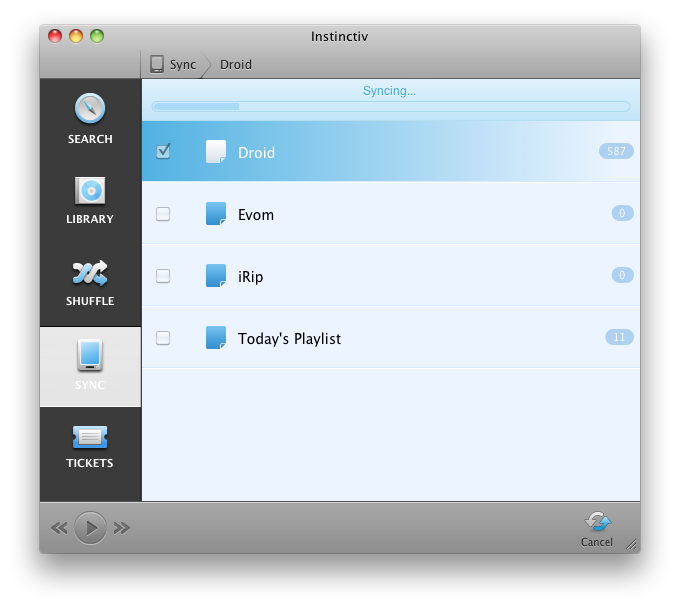 While it doesn’t have a robust library structure like doubleTwist, Instinctiv is your simpler alternative. Geared towards finding songs rather than digging through artists and albums, you can quickly search for your favorite tunes, shuffle playlists based about songs, and even search for the latest concert tickets from your favorite artists. I couldn’t get the ticket search working - which might be due to my massive library. 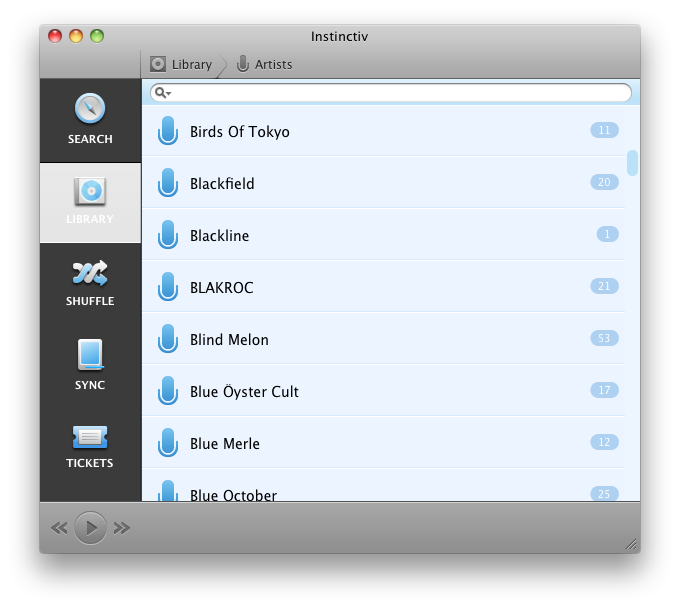 I was a little disappointed with the structure of searching for music. More often than not, you’ll end up coming across a list of songs. For example, there is no Artist -> Album -> Songs hierarchy (I personally detest searching by album or genre alone). It’s just Artist -> Songs. This is okay I guess, but if you want to kill an album for an afternoon, you’re gonna have to search by Album alone instead. 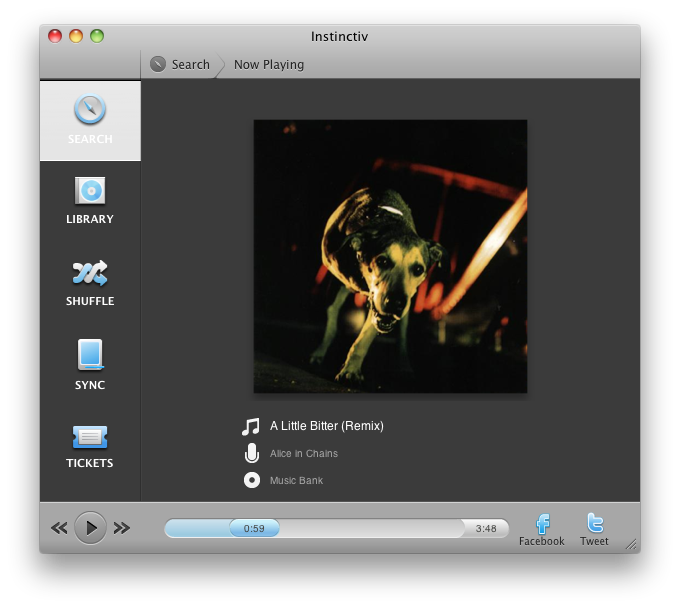 The music player itself is nice. I didn’t notice a dedicated volume slider, but your Mac’s volume should suffice anyway. I did immediately notice that the icons depicting song, artist, and album were eerily similar to the icons you might see on an Android music player (which isn’t a knack by any means - just an observation). For you now playing fans, you can easily share what song you’re listening to via Facebook or Twitter.

Instinctiv is free to download, so give it a try if you’re sporting a BlackBerry or one of them new fancy Android things. While you can’t really manage your music in Instinctiv, you can easily search and find what you’re looking for, as well as have similar genius-like shuffle features at your disposal. In the meantime, keep your eyes on future updates, and be sure to contact developers with features you’d like to see.