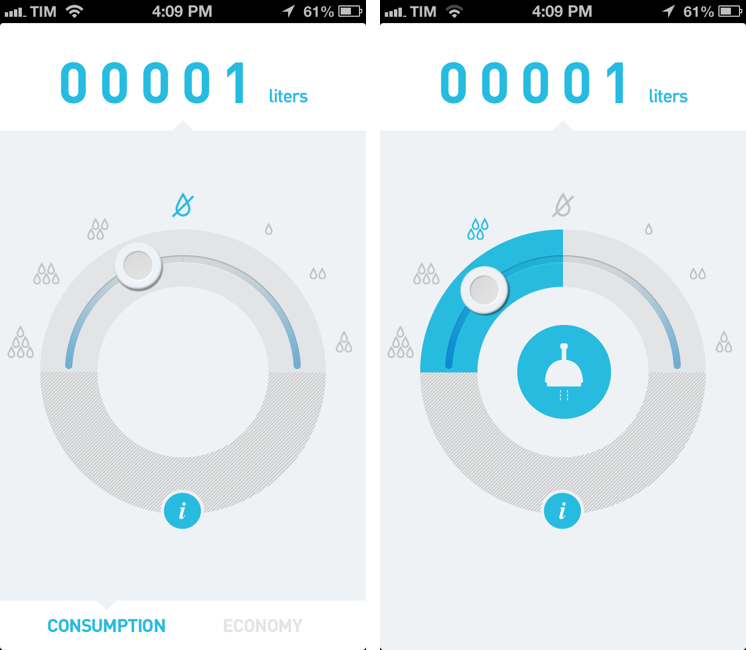 Akatu Fake Shower may seem like a very stupid app. I mean, watch the promotional video:

Yesterday, after my friend Matt tweeted about Fake Shower, I downloaded it (the app is free) expecting to stumble upon a silly joke. To use Apple’s parlance, I thought it was another fart app, disguised as a clean-looking utility to actually achieve the opposite goal.

Then I decided to look for more information.

It turns out, Akatu is a non-profit NGO that focuses on raising awareness about consumption choices. It was founded on March 15, 2011 (World Consumer Rights Day) with headquarters in São Paulo, Brazil. Here’s a TEDx presentation by one of the co-founders of Akatu, former Brazilian minister Helio Mattar, talking about “conscious consumption”. In short, Akatu’s goal is to show how our consumption habits could be improved.

All the “reviews” of Fake Shower that I found didn’t mention that this app leverages an embarassing premise to cleverly raise awareness on the issue of water consumption. The app’s motto – “Because love is blind, but not deaf” – perfectly sets the tone for an “experience” that, for a lack of a better description, offers a way to cover the sound effects of your bodily activities. But why aren’t more people looking into the organization behind this “stupid app”?

Fake Shower is also nicely put together on a mere technical level. The app is divided in two main areas: Consumption and Economy. The main feature of the app – using the iPhone’s speaker to simulate the noise of a shower – is available in the middle of the screen with dial UI to choose between tap or shower sound. Each source comes with three levels of intensity that you can adjust by sliding with your finger on the screen; as water “flows”, a counter at the top will show how many liters you would have consumed if you had decided to use an actual shower or faucet.

On my iPhone 5, I was impressed by Fake Shower’s volume level and sound reproduction. I haven’t used the app for its real purpose yet, but I believe it would work just as advertised. It was also nice to find subtle details such as the sound of the last remaining drops of water when you “turn off” the shower. 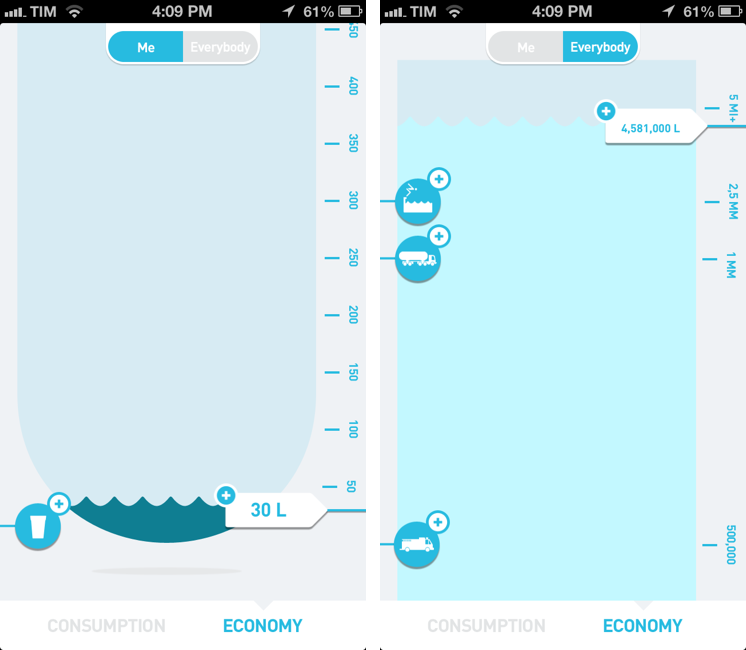 When you tell Fake Shower that you’ve finished, Akatu’s implementation of consumption awareness kicks in. The second tab, Economy, gives you a summary of how much water you’ve saved using Fake Shower. With a smooth animation, fake water will fill a fake tank displaying liters on the right (with nice pop-up dialogs) and real-life equivalents on the left. For instance, my 30 liters equal 150 glasses; as you keep not wasting water, you earn badges.

But there’s more. At the top of the Economy tab, you can switch from Me to Everybody; doing so will refresh Fake Shower’s online database to show how much water was saved by the app’s users around the world. Right now, Fake Shower says over 4.5 million liters have been saved – the equivalent of 229 fire trucks. Next to this cool fact, Fake Shower asks: “Can you believe you’ve saved enough water to put out a huge fire?”

Of course, I don’t know if the water I’ve saved will actually be used to extinguish fires. Or grow more plants in a field somewhere. But I think we can all agree – in spite of political differences among us – that maybe it’s better if we don’t waste stuff on this planet anymore.

I downloaded Fake Shower and I expected to get yet another stupid utility to show to my friends. Instead, I found an app that’s, yes, incredibly silly, but that also made me think about the issue of modern consumption without heavy propaganda, in a lighthearted manner. I think Akatu did a great job.