We’re always looking for new apps. We’re always looking forward to that new app which should revolutionize the way we work. Apply this statement to file sharing (a way too crowded market on Mac OS X) and you’ll see thousands of people eagerly talking about Droplr, Tinygrab, whatever. There are at least 20 similar file sharing apps that I know, and while some of them are really good pieces of software, most of them are crap, period.

I think it’s impossible to review Cloud app by Linebreak without mentioning the fact that these guys managed to build a tremendous hype around their first mainstream application: back when Cloud was nothing but an icon, I remember everyone was talking about this new app which had a great looking icon and was every Mac user’s wet dream. Nice, we all started following the Twitter account. Cloud was then released as ultra-closed beta, and a few designers had the chance to put their hands on it and tease us on Twitter about how awesome it was. Again, we bookmarked a Twitter search for the terms “Cloud Mac”. Last, Linebreak opened even more spots for the beta, and we reviewed an early version of Cloud. It impressed us. It was easy to use, fast, useful, customizable, definitely Mac-like. But still, it wasn’t finished. Hell no, it needed more work, more refinements, more features, new servers - whatever it takes to be the champion.

To stand out from the crowd of file sharing apps.

Now, Cloud has finally gone public. And it’s way better than before.

Cloud is an application for sharing stuff on the internet. Simple as that, this is what the app ultimately does and what, actually, many other applications do. The main point lies in the realization, in how Cloud app is indeed different from all the other apps. Whether it’s for better or worse, Cloud’s got some nifty features that its competitors don’t have.

Obviously, Cloud app comes with a web interface to back up its desktop software, and it’s a pretty well designed web application. Once you’ve signed up for an account (and here we mention the small hiccups the Linebreak servers had after the first minutes of the official launch. Come on guys, thousands of people were suddenly requesting files and urls) you can access your online account. The main screen is some sort of dashboard where you can review your total uploads and how many times they were viewed by your followers (yeah, you’re going to use this for Twitter), browse by the file formats Cloud supports (images, bookmarks, text, archives, audio, video) and manually add a bookmark or upload a file. I repeat, the interface here is very nice and polished, just as I expected from Max and Jonathan (Schoening and Castro, Linebreak designers and developers). The tools section is where the magic happens, or put simply - where you can download the application and the raindrops. Some terminology: Cloud app supports plugins called “raindrops” which allow the app to work with external applications such as iTunes, Firefox, Aperture and Webkit. Some of them come pre-installed, you’ll have to download the additional ones. Installing them is as easy as double click. 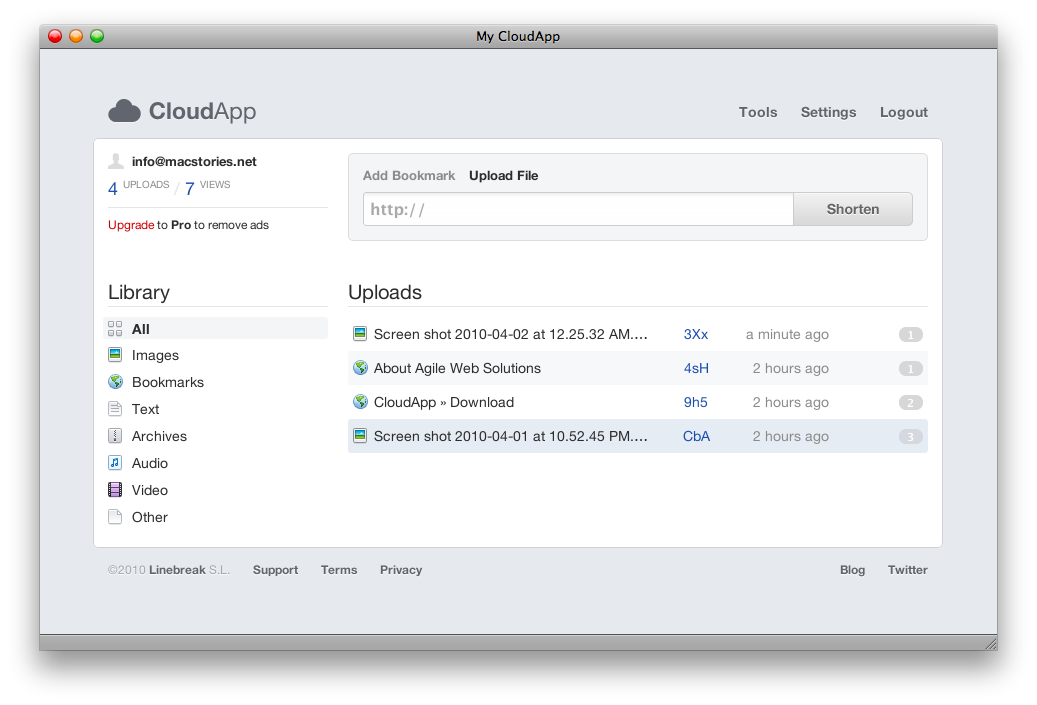 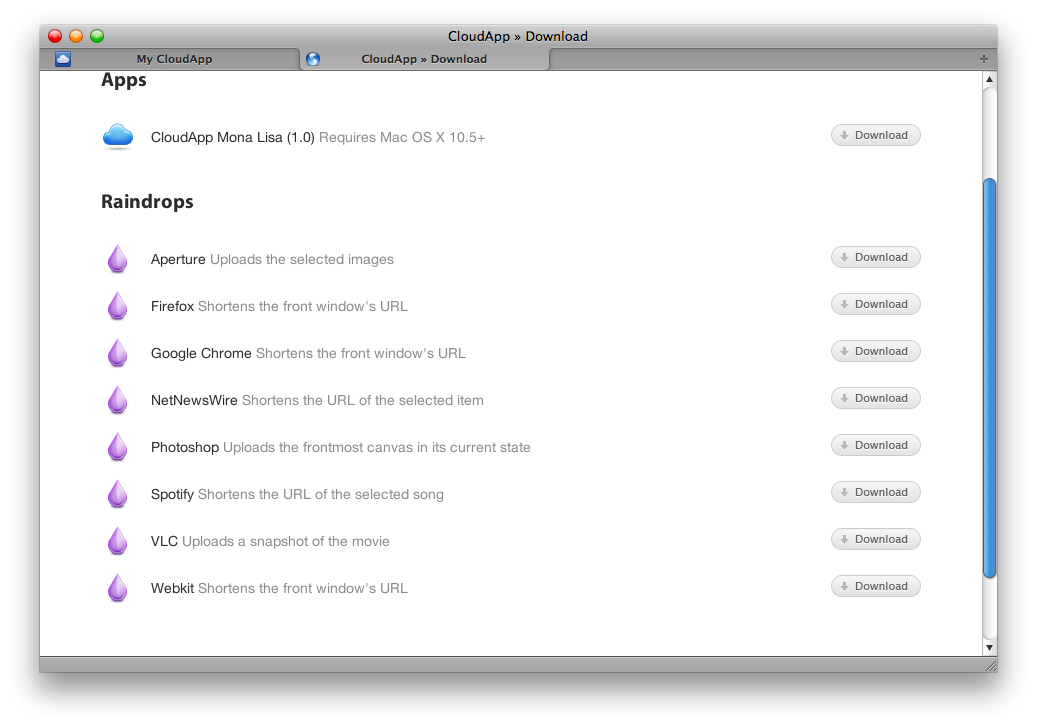 Now, let’s move onto the real thing, the Cloud.app I assume you’ve already downloaded. First, Cloud runs in the menubar, pretty much like Droplr. It’s got a nice black / glowing blue icon, and I like it. Before even trying to upload something you have to fill your account infiormation, and you have to open the Preferences to do so. I would have appreciated a guided wizard anyway. Once you’ve authorized with your account you’re all set and ready to get cloudly. 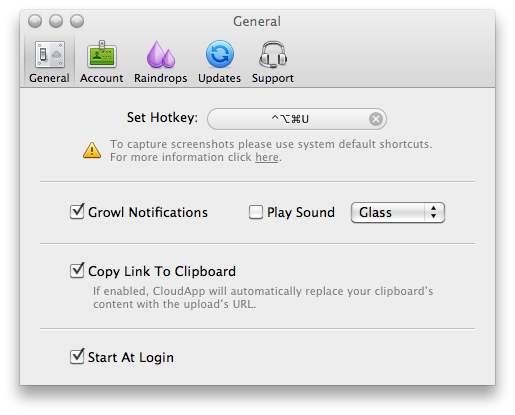 Cloud app uploads files to its servers and returns a cl.ly short URL (like this) that gets copied into your clipboard for easy and quick sharing. You can either drag files and links onto the menubar icon or create a system-wide hotkey that, when pressed, triggers Cloud wherever you are in the OS. You’re editing a file in Photoshop and want to share it with your colleagues? Invoke the shortcut and in a matter of a few seconds you have the short link. Same applies for photos, Safari links (thus becoming a URL shortener), Finder items. And if you consider all the raindrops you can install (and I assume more will come in the future) you can understand why Cloud is the most integrated and supported file sharing application. Of course this also works with Mac OS X’s default screen grabbing capabilities: if you check the auto-upload option in the Prefs and take a screenshot with ⌘ + ⇧ 3/4, it will go into the Cloud. While playing around with the preferences you can also find sound and Growl notifications, raindrops management and the “start at login” option. Lastly, the menubar icon allows you quickly preview what you’ve uploaded by listing your most recent uploads, together with custom icon for different file types and views. Clicking on one opens a new tab inside your default browser. 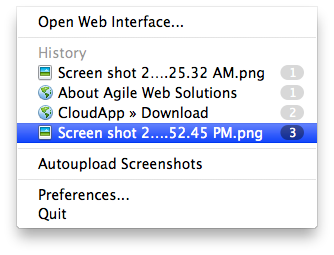 I’ve been testing the beta version of Cloud for months and I can definitely say it’s a great app, that seriously comes in handy if you’re a social savvy guy who needs to share tons of files and links everyday and that, really, can change the way you share stuff on the internet with your friends, co-workers and so on. It has some limitations though, and we have to mention them. At the moment of writing this, Cloud doesn’t support custom domains (Droplr does) but Max confirmed they’e coming in less than 30 days. Also, Droplr has got some neat note taking / uploading functions (which Cloud hasn’t) and it even lets you choose between Markdown and Plain Text. You can’t Quicklook items in the menubar, and that would be just great. If you exclude the aforementioned lacks of Cloud, Linebreak’s app and Droplr are *very* similar. Someone would say they’re just the same app. I disagree. What makes Cloud stand out (and what indeed made it stand out months ago) is the raindrops plugin system which, like I said, provides a terrific way to integrate this app into other apps. It’s genius, and we want to see more raindrops (with user contributions, perhaps?). Droplr hasn’t got none of this stuff, but I guess they’ve got something in the works. God knows.

That being said, Cloud is simply awesome. A pro version is ready to be launched tomorrow, and I bet that will make things even better. Cloud works great, is wicked fast, manages to integrate well with all the other applications you’re used to. Most of all, it doesn’t get in your way. And this, if you ask me, is the most important thing.