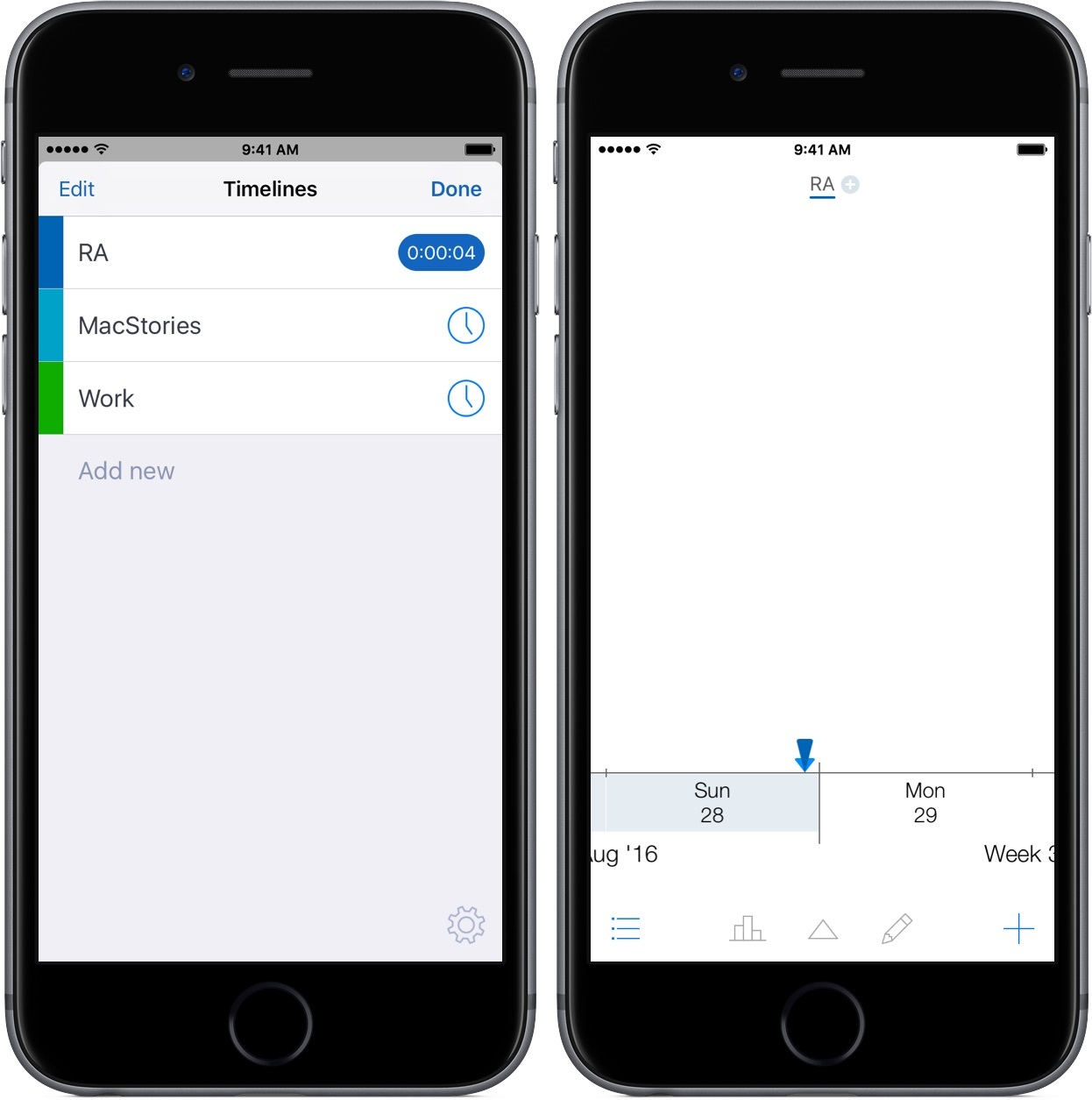 As I type this review, I can see three devices that I can (and do) work on in some capacity with relative efficiency: a 12” MacBook, an iPhone 6s, and an iPad Pro. Along with my work at MacStories, I use these products to build and manage websites, write news stories, and get classwork done – all from the small space of my college dorm room.

Of course, I’m not the only one – millions of people have completed the transition to working from home, skipping out on the world of corporate computing for a more convenient and personal experience. There is one glaring problem, however, when discussing the move from the in-person job lifestyle: tracking time.

Timelines is an iPhone-only app that helps you manage and record your working time. For freelancers, remote workers, and students, Timelines scratches the basic itch of getting your time down into a piece of software for later action. 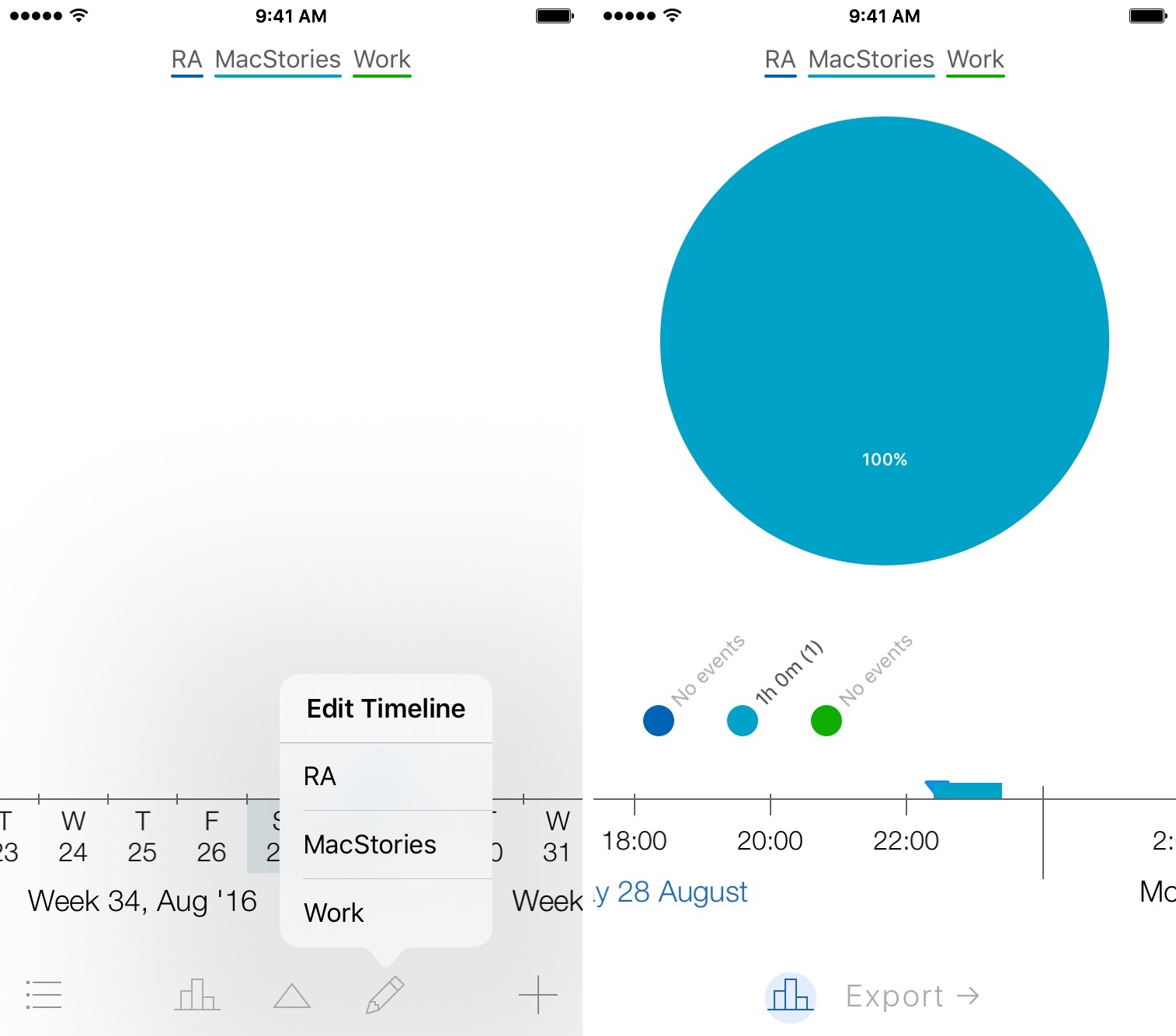 Within Timelines, the first thing you’ll want to do is set up your…timelines. Let me clarify: in the app, a “timeline” is a job that you’ll be looking to track. If I wanted to track all the time I wrote for MacStories, for example, I would create a timeline under the site’s name.

In total, the process of setting up a timeline will take you roughly thirty seconds. On the main screen, tapping the list icon at the bottom left corner will raise a collection of your timelines. Select “Add Timeline” (or “Add new” after you’ve added at least one), enter in the name, select a color, and you’re done. If you’d like to be a little more detailed, you can also add some optional notes.

Once you’ve created and selected a timeline, Timelines will bounce you to the main screen where you’ll spend the majority of your time. Along the bottom of the screen sits a sparse toolbar, a collection of necessary buttons that function around the input and viewing of time. All are absurdly simple and straightforward, so here’s an almost-comprehensive overview of what each does:

Along the top, is the option to broaden your history to your liking – you can choose which timelines you’d like to see activity for, including multiple or all.

While on the topic of the calendar, one important thing to note is the ability to zoom in and out to refine your time view. By performing the familiar pinching and pulling gestures, you’ll get a closer or more general look at how you’ve been spending your time.

I also want to mention the quickest way to track your time in the app is to jump into the timelines view, locate the clock, and tap it to begin an event. Doing this will create an untitled event and will run until you tap the counter to stop.

Lastly, I’d like to mention that there is a Timelines app for Apple Watch, which lets you start a timer for a particular job straight from your wrist. It’s not much more than that, but those who prefer an even faster way to track time should check it out.

Timelines both benefits and suffers from its simplicity, embracing white space and minimal features to almost a fault. For most people, the act of getting time recorded into an app is enough; however, people who run their own business will probably like to look elsewhere for an app that can go a little more in-depth.

My usage of Timelines varies between work and play – sometimes out of interest, while other times for my job as a resident assistant. For the latter, Timelines shines, allowing me to log intentional interactions and other times I’ve been “working” so that I can report on that at the end of the week.

Timelines is also a solid option for people looking to record and analyze how they spend their time. Rather than using the app as a business tool, it’s remarkably simple to use it as a rudimentary report of habits, actions, and practices. Because Timelines stays neutral regarding its purpose, it challenges the user to act how they so choose.

Built with speed and stability in mind, Timelines provides a top-notch tool for time tracking. It leaves little to be discovered beyond its basic features, but the functionality is enough to get the job done.

With its release almost two weeks ago, the app is remarkably full-featured, doesn’t have any serious flaws, and is lightning fast. While I would like to see action extensions and an iPad app in the future, the absence of such features aren’t deal-breaking by any means.

If you’d like to give Timelines a try, you can pick it up in the App Store at a special launch sale price of $4.99.