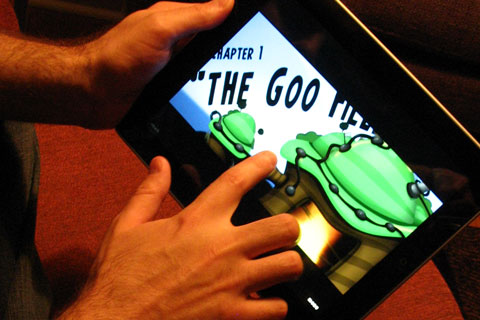 World of Goo has had incredible sales as it launched on the iPad, eventually reaching the #2 spot after a $5 price drop from $10 and lots of press coverage. In its first month of sales, the Mac famous strategy slash flubber-venture sold approximately 125,000 copies in the iPad’s App Store, having been exalted by the media on numerous occasions as well as by Apple, deservedly featuring World of Goo on the store’s front page. 2D Boy has published a rather lengthy analysis on their indie title, and we encourage you to click past the break for an overview of some of the finer points.

World of Goo should be a five star application, but those few (and loud) one star reviews can burn developers and reduce the coveted perfect score to a 4.5 or a 4. Game developers in particular are vulnerable to unhappy buyers as they’re fighting an uphill battle on two fronts: usability and gameplay difficulty.

Overall, World of Goo has been receiving very favorable reviews in the App Store, averaging 4.5 stars. But of the most critical consumer reviews, the majority express their frustration with the difficulty of the game….

What we neglected to consider is that the iOS audience might be looking for a different kind of fast-fun entertainment, where punishment for failure, no matter how slight, is not an option, and no matter how badly you play the game you always feel you have a reasonable chance of success. To address this, an updated version included a more prominently featured “skip level” button, and allows an unlimited number of skips.

I’ve fell victim to the “lazy symptom” as well when I called shenanigans on a level in Astronut (the level with all the thorny planets + laser fences), and looking back it was silly considering that the challenge only made beating the game so utterly sweet. I’ve thought about this kind of attitude for a while now, especially since mobile gaming is infinitely more accessible than gaming on consoles. Do people expect games that they can go brain dead for five or ten minutes on, or do people want a challenging teaser like Trainyard? Angry Birds isn’t impossible, but Rovio is monetizing on people’s impatience with The Mighty Eagle. Can’t beat a level? Pay your way out of it. F***ing GENIUS. Dead Space offers a chance to buy a crap load of nodes and power packs so you can get upgrades early in the game. Baseball Superstars offers points so you can rank up your team. Congratulations! We’ve found a way to get rich off cheat codes! More mainstream than GameShark, it’s unfortunate that instant gratification can ruin a developer’s reputation when players get frustrated over otherwise fun titles.

We were convinced that without intervention, World of Goo would fall off the charts and lose all visibility, so we decided to experiment with a price cut. We dropped the price from $10 to $5 about a month after release. We emailed press folks to notify them of the upcoming price change ahead of time, and over the course of the next 24 hours World of Goo shot up the top grossing charts from #51 to #2.

While $10 is less than most people pay for a movie ticket, or lunch, it’s still seen as a very high price for a game on the App Store and turns many people off.

Where does EA make the big bucks? $.99 cent massive app deals that reap untold rewards. The problem with smartphone apps is that they’re incredibly ephemeral: people don’t see paying $10 for something they’re going to chew through in a day. If you sell a rather inexpensive app that continues to add value once you’ve hooked the customer (Angry Birds is the perfect example), you make an incredibly happy customer who is forever indebted to support how “awesome” you are. It’s the gift that keeps on giving! The App Store is unforgiving because all of the players affect the overall perception of the market: if all of your competitors are selling edible crap (people are getting adjusted to the idea of game nibbles), you have to deliver and vigorously sell a really stunning experience to prove your lengthy RPG is worth $15. Chaos Rings pulled this off, but then again Final Fantasy is an established franchise. World of Goo is known to us geeks, but I guarantee you my Xbox hungry step-brother has never heard of it, or bothered to investigate further between Call of Duty sessions.

Despite those the demands for lower price tags, Apple’s App Store is outselling sales on Nintendo’s & Microsoft’s consoles. Never underestimate the power of spendy and trendy iPad owners.

Those particular points were interesting to me as a reviewer, but Ken Yarmosh might have a thing to say if I didn’t direct you to 2D Boy’s original blog post, where they investigate App Savvy worthy statistics like sales, rank, & revenue. A good way to learn early is by evaluating the successes and pitfalls of others: here’s your chance.