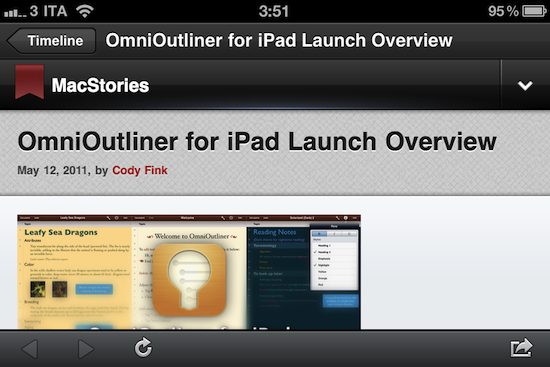 If you read my original Tweetbot for iPhone review, you know it’s a great Twitter client I’m in love with. Over the past weeks I had the chance to try out an early version of Tweetbot 1.1, released today in the App Store, and once again Tapbots has managed to fit so many features into the app it’d be hard at this point to think of anything that didn’t find its way into Tweetbot. Version 1.1 introduces the much requested support for landscape mode, but there’s a catch: considering the portrait nature of the iPhone, landscape only works in three sections: compose window, for those who like to type with a larger keyboard; media, to view photos in landscape; web, to have a broader view of web pages. It makes sense to not offer landscape support in the timeline – you’d have to give up on viewing a certain amount of tweets in horizontal orientation, plus, let’s face it, it would just look weird. So landscape it is, but only for some sections of the app.

Tweetbot 1.1 is also rich in additions to the main experience. The app’s got new user and hashtag buttons added to the compose screen, to make it easier to include people of specific keywords in a tweet. The hashtag picker has been improved as well, if you’re into following Twitter trends, or have a set of tags you use often. More importantly, photos and videos can now be uploaded to CloudApp, meaning the service is not only being used for URL shortening anymore. In the timeline, Tapbots has fixed the location stuff to display more accurate locations and moved the “tweet gap” bar above old tweets, instead of below. I’m not sure I like the new gap bar better, but perhaps it’ll keep growing on me over the next weeks.

Overall, Tweetbot 1.1 builds on the excellent foundation of version 1.0 to deliver a powerful Twitter client that’s heavily based on Tapbots’ custom style, but it’s accessible for anyone who’s never used a Tapbots app before. The app is propagating now in the App Store, so check for updates in iTunes in a few minutes if it isn’t out for you yet.