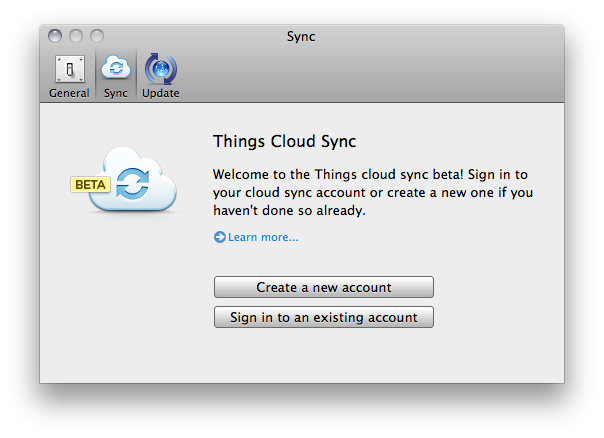 Years in the making, Cultured Code finally flipped the switch on the initial beta of Cloud Sync for Things, the popular GTD application for Mac, iPhone and iPad. Things, featured several times by Apple in the past and winner of a Design Award in 2009, was long criticized for the lack of over-the-air sync for tasks and projects across desktop and mobile devices, something that was implemented by other GTD-oriented applications like OmniFocus and Wunderlist with decent results in the past few years. Cultured Code, however, decided to wait before making a public announcement about their OTA sync plans; then, back in December, they revealed that, yes, they were working on a sync service for Things (which counts thousands of users worldwide), but it would take longer than expected due to the extremely unique nature of the product. And today, Cultured Code is letting registered beta users try the first version of Things Cloud Sync, although with some limitations.

We’re not able to test the actual implementation of sync right now, but details can be gathered from the developers’ blog and official sync page. This first version of cloud sync for Things will only work Mac-to-Mac, as the iOS clients haven’t been updated to test the functionality yet. The initial rollout of cloud sync is meant to test the reliability and scalability of the service, which, unlike most OTA sync tools out there, doesn’t want you to manually trigger a sync session but it’s aimed at constantly transmitting changes to the cloud – think of a continuous client for GTD. As Cultured Code explains, this is all based on a database system that makes sure current beta users can run the limited Things 1.5 version without corrupting their existing personal Things database. As explained in “State of Sync, Part III”:

Things will sync frequently. While there will be a way to initiate sync manually there should hardly be any reason for doing so. Every change you make is transmitted to the cloud almost instantly. No matter when you quit the app, your data is safe with the server already. Whenever you open Things, switch applications, or wake your computer from sleep, Things will check back with the server to see if there are any updates to pull.

Things will always connect to the server using an encrypted connection. Not only during log-in, as many web sites do, but for every connection. This means that your to-dos will never be sent in the clear.

The current beta of Things 1.5 can be downloaded here, but Cloud Sync is exclusive to users who signed up to Cultured Code’s list months ago and are receiving an activation email today. To stay up to date with Things sync development, follow Cultured Code’s blog here.