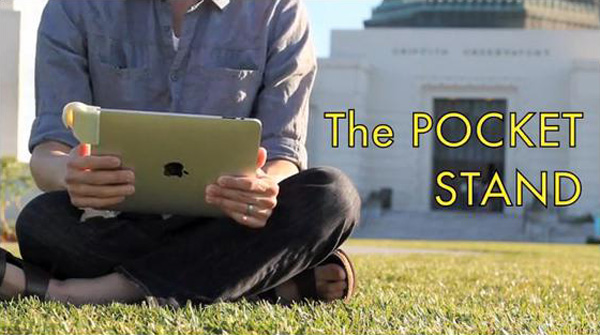 We’ll admit, we love unique ideas, especially ones that are driven toward Apple products. We’ve found another Kickstarter project to show you on MacStories, it’s called The Pocket Stand.

The Pocket Stand, by Mike Paek and Sam Chan,  is an iPad accessory, you could also call it a compact multi-tool for the minimalist. It is both a speaker amplifier and a stand that props your iPad in multiple configurations (Bonus: It also functions as a bottle opener). In the end, The Pocket Stand allows you to gain extra functionality without sacrificing the mobility inherent of the iPad.

Clip on the Pocket Stand to your iPad and it makes doing anything on your iPad much, much easier. The unique feature of the Pocket Stand is the ability to amplify sound via a hidden acoustic cavity. The Pocket Stand was shaped around the acoustic cavity, so it will allowed an audio increase of 7-10 decibels! The device itself is  2.5” long x 2.3” wide x 0.65” tall and made from a rubber-like polymer that’s skid-proof. So it literally is a stand that fits in your pocket. 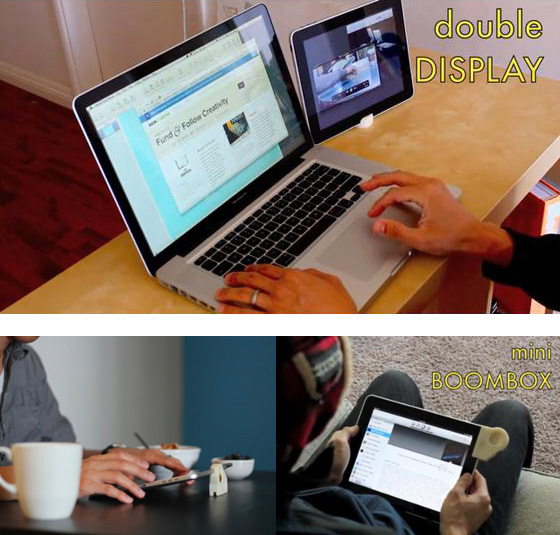 Mike and Sam at Subatomic Workshop is hoping to raise $15,000 with Kickstarter to help them cover the costs associated with a 2-piece injection molding to make their product. They recently launched their 30 day Kickstarter campaign last week and they have over $1,200 already via Kickstarter backers. The minimum pledge is $1 but $20 will put you in line for a pre-order for a Pocket Stand. There are a few different pledge options listed on the Kickstarter page.

Head on over the their Kickstarter page to see a great demo video. The project’s funding period will end at 11:59pm on Friday, March 18. If you really like this idea, please help get it started by pledging here. This looks like an excellent, minimal, multi-functional iPad accessory that we think many people would enjoy.