At Apple’s media event yesterday, Apple unveiled a new high-end iMac that includes a Retina 5K display. Starting at US$2499 it includes the 5K display with a resolution of 5120x2880, a 3.5GHz quad-core Intel Core i5 processor, 8GB RAM, 1TB Fusion Drive and an AMD Radeon R9 M290X graphics processor with 2GB of GDDR5 memory. In every other respect, the iMac is identical to its non-Retina version, still tapering off to the sides with an edge of just 5mm.

“Thirty years after the first Mac changed the world, the new iMac with Retina 5K display running OS X Yosemite is the most insanely great Mac we have ever made,” said Philip Schiller, Apple’s senior vice president of Worldwide Marketing. “With a breathtaking 14.7 million pixel display, faster CPU and graphics, Fusion Drive, and Thunderbolt 2, it’s the most beautiful and powerful iMac ever.”

The Retina iMac can be further upgraded to a 4GHz quad-core Intel Core i7, 32GB of RAM a 3TB Fusion Drive or 1TB SSD and an AMD Radeon R9 M295X with 4GB of GDDR5 memory.

Apple’s website explains the interesting technical features that allow the iMac to have a 5K display, including a custom timing controller, Oxide TFT and highly efficient LEDs. Because there are nearly 15 million pixels, Apple developed its own timing controller that has four times the bandwidth of the previous generation 27-inch iMac.  The Oxide thin film transistor (TFT) provides the electrical charge to each pixel and does so more precisely and quicker than other technologies - and is even more energy efficient. Apple have also used more efficient LEDs which has actually enabled them to power four times the number of pixels with 30 percent less power.

The new screen is, as you might expect, gorgeous at first sight, and prolonged exposure only heightens the experience. And even as someone who’s used to using a Retina MacBook Pro as his main machine, it’s a big step up.

Apple loves making the iMac easier on the eyes. It was made much sleeker, then much thinner, and today Apple focused not on the shell but on the screen. And what a screen: the new 27-inch iMac with Retina display’s 5K, 5120 x 2880 display looks incredible. Like, incredible. How much more can you really say? The screen is gorgeous. It’s quite reflective, but it’s crisp and sharp and accurate. Watching a 4K video back pixel-for-pixel with room to spare is a pretty fun thing to do.

It should probably come with a drool cup. Whether I viewed it head-on or from the side (extreme sides), the new iMac with 5K Retina Display ($2,499) wowed with its highly detailed and colorful visuals. Packing 5120 x 2880 pixels, the new iMac has the sharpest screen I’ve seen on any PC. But it’s not just about the resolution. Apple shifted to oxide TFT from amorphous TFT in order to charge the pixels faster and let them hold longer for your viewing pleasure. The company also employs organic passivation technology, which takes the data lines and pixels and puts them on different planes, inserting an organic layer in-between to make the video signals clearer.

In the hands-on area at Apple HQ, I saw the new 27-inch iMac editing 4K video in pixel-for-pixel resolution, with enough room left on the screen for all of Final Cut Pro’s toolbars and controls. Final Cut Pro wasn’t even running full screen—in the photo below, notice the Dock still hogging some space along the bottom. Not bad. 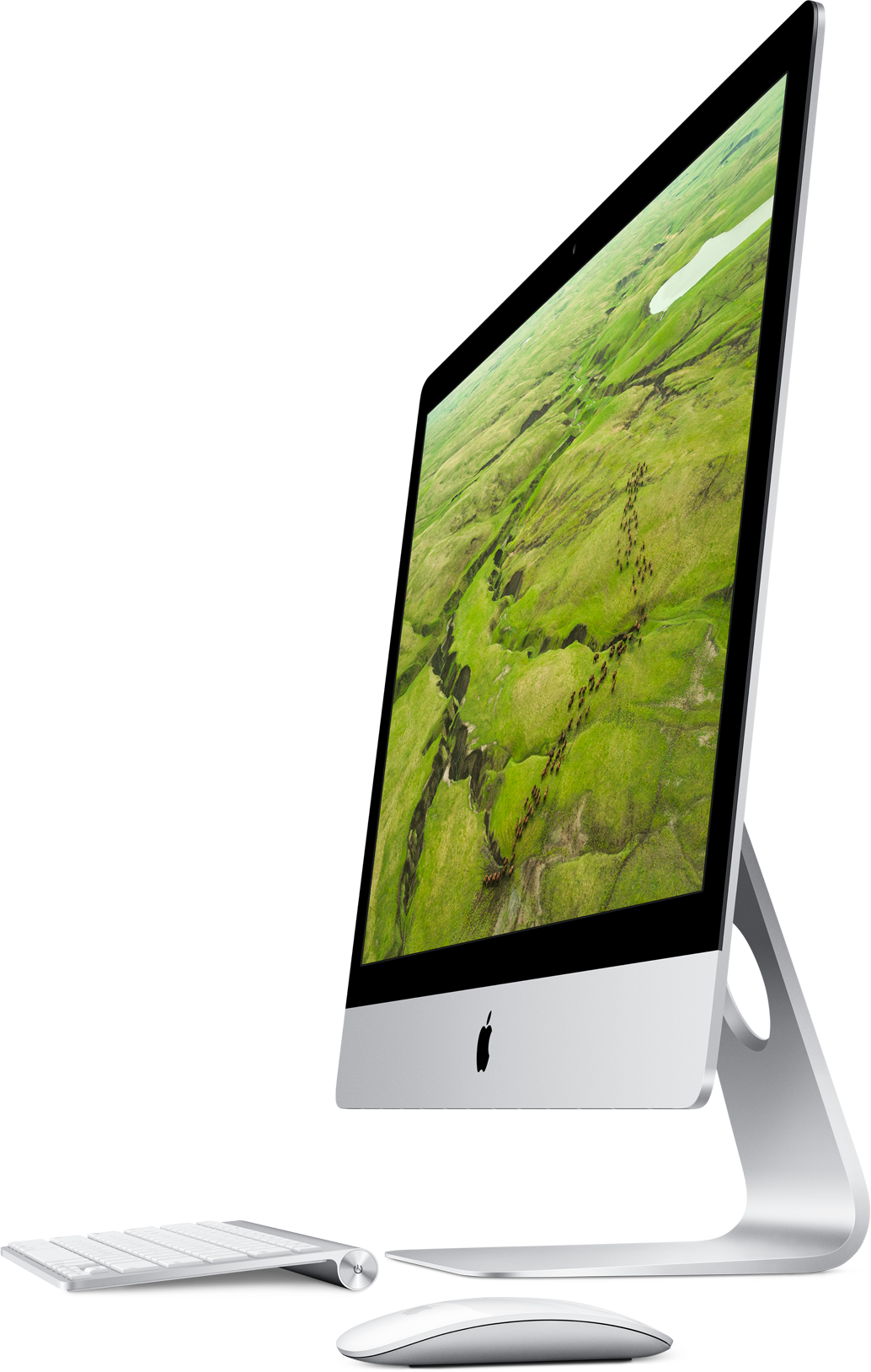