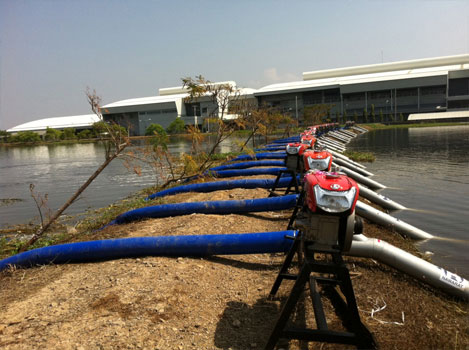 Flooding in Thailand has caused a worldwide shortage in hard drives as manufacturers of platter based hard drives and hard drives components have gone underwater. Hard drive motor supplier Nidec (whom supply 100% of drive motors to companies such as Seagate, Toshiba, and Western Digital) have many factories that are offline and inaccessible, straining the supply. Consequently, hard drive prices have risen dramatically and products are seeing longer wait times. 14,000 factories in the region have shut down, suspending work and leaving 600,000 people without a job. Over half of the world’s hard drives are made in Thailand.

On Friday, AppleInsider wrote that Apple’s build-to-order iMacs were seeing wait times up to 5-to-7 weeks as 2TB hard drives are running short. iMacs with smaller hard drive configurations will ship within a few days. During Apple’s conference call in October, Cook noted that there would be an industry shortage of hard drives (and that they sourced many components from Thailand), though Apple’s thoughts remained with the people affected by the flooding.

As factories are scrambling to pump out water and refurbish damaged equipment affected by the flooding, there is a glimmer of hope as the year ends. Western Digital announced on Thursday that the production of hard drives has resumed in one of its buildings.

Specifically, the company indicated it [has] re-started production of hard drives this week in one of its buildings in Bang Pa-in (BPI), Thailand, one week ahead of internal schedules. This facility had been submerged in some six feet of water since October 15, the estate was pumped dry on November 17, main power was restored on November 26 and production restarted November 30.

This doesn’t mean hard drive production will dramatically pick up anytime soon. Many factories have to assess damages, and Western Digital has said that specific components such as head sliders aren’t likely to resume production until March, 2012. It won’t be until after the next quarter that hard drive component manufacturers will finally be able to have a handle on the situation, but it’ll likely take much longer to resume production at scale thanks to the scale of the Thailand flooding.

[via AppleInsider, Ars Technia, and OWC] Header image via NikonRumors.