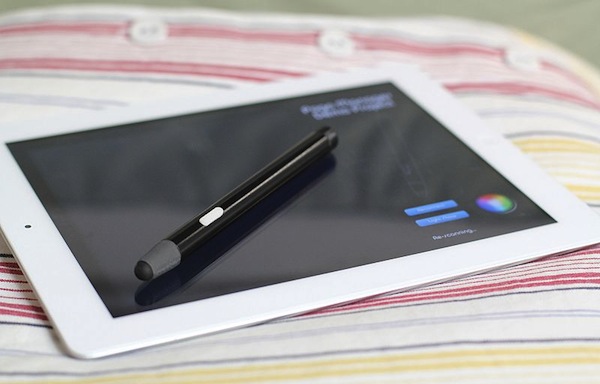 Ten One Design, makers of the popular Pogo stylus for iOS devices, announced today a brand new product – code named Blue Tiger for now but likely to receive the Pogo monicker come the final release – that the company is marketing as suitable for the yet-unannounced iPad 3. The stylus, pressure-sensitive and powered by Bluetooth 4.0 technology, will work with the iPhone and iPad, and feature an SDK for developers to integrate the pressure-sensitivity technology in their iOS apps.

You may have been hearing good things about Bluetooth 4.0. It’s a fast wireless connection, and is fully supported by the CoreBluetooth framework in iOS 5.

Bluetooth 4.0 devices don’t need to pair with your iPhone or iPad, they just connect and work. Also, the battery life is dramatically better - think months or a year on a single coin battery. We’ve developed the first pressure-sensitive stylus for iPad that uses Bluetooth 4.0.

It’s not clear why would Ten One Design specifically state the new stylus is “made for iPad 3” just a few days ahead of Apple’s announcement, but the fact that the new device will carry Bluetooth 4.0 is an assumption that’s been made by many lately (Apple itself has upgraded several of its devices and computers to Bluetooth 4.0 in the past year). Sample hardware of the Blue Tiger is available for testing today, and, judging from the first video, it appears the stylus in combination with hardware (and, we assume, Bluetooth) will be able to ignore palm and finger touches, focusing exclusively on the custom-made pen tip.

Details are scarce for now, and Ten One Design promises more will be revealed in the coming months as the product is finalized and gets FCC approval. For now, we can only speculate that the iPad 3 will indeed feature Bluetooth 4.0, and watch Ten One Design’s first video of the Blue Tiger, embedded below.