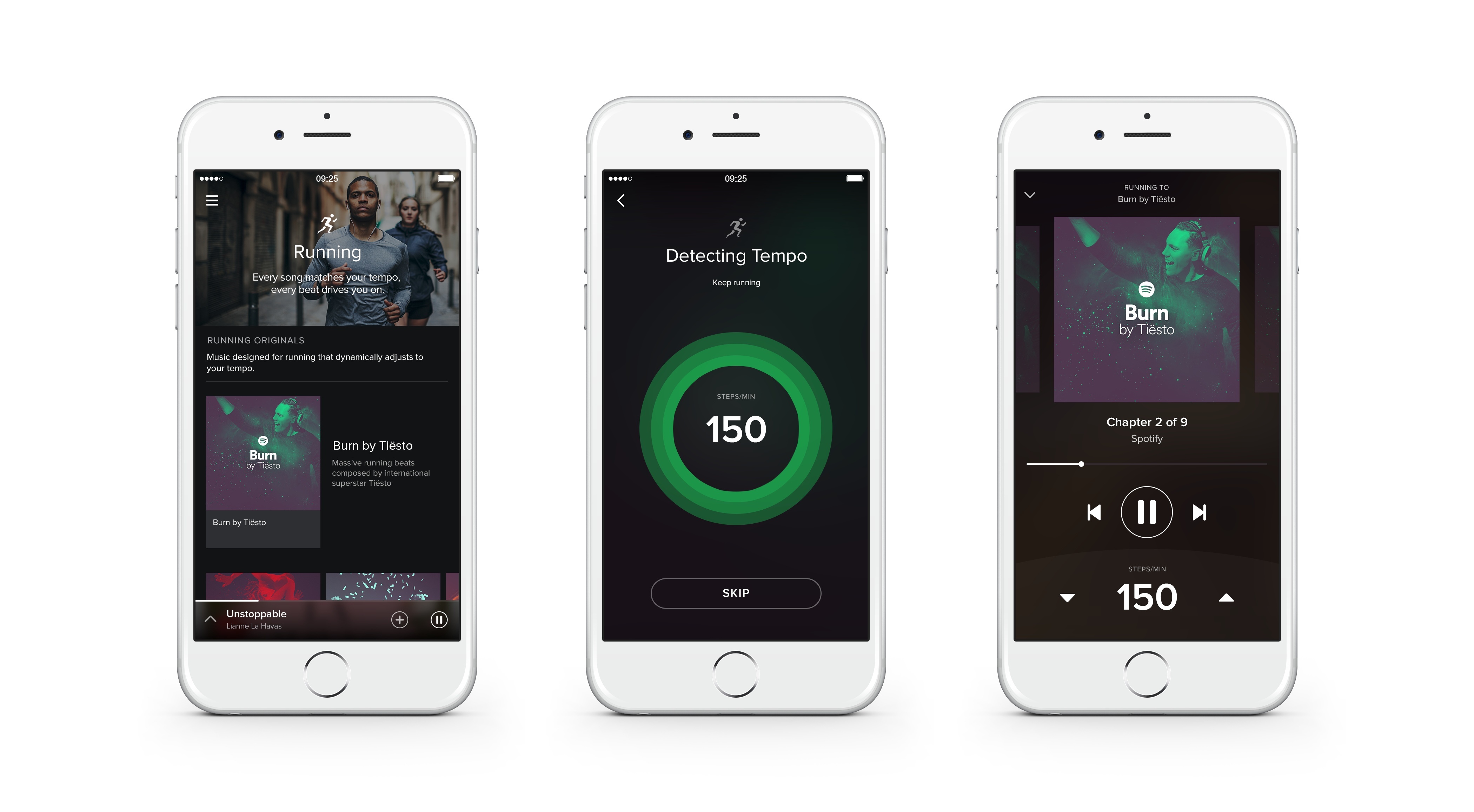 At a press event held earlier today, Spotify announced a series of initiatives to bring new media content to the service with audio and video shows, a new recommendation section, and Running, a feature to help runners listen to songs dynamically matched to their pace.

With over 25 billion listening hours since its original launch seven years ago, Spotify is hoping that expanding beyond music with audio and video clips from a variety of sources will let users spend more time in Spotify even when they’re not looking for music. Through a mix of podcasts and video content, Spotify is partnering with companies such as ABC, BBC, Comedy Central, Condé Nast Entertainment, ESPN, Fusion, Maker Studios, NBC, TED and Vice Media to offer an entertainment section that potentially pits the service against YouTube, providing an all-in one solution that adapts to a user’s lifestyle and habits during the day.

Spotify has worked with initial partners for the rollout of Shows, and it’s not clear whether anyone will be able to broadcast their own audio and video content on Spotify in the future. Spotify is using their existing recommendation technology to suggests audio and video shows to users inside the app; broadcasters will get profiles similar to artists and users will be able to browse audio/video content with the same set of controls available for music. As reported by BuzzFeed, video clips in Spotify will be limited to 10 minutes and they’ll be available in both the free and premium tiers.

Spotify is also revamping their music recommendation features with a simpler Now page. By combining editorial curation with algorithms for intelligent suggestions, Spotify wants to encourage users to start listening to music in different times of the day with a simplified UI that doesn’t require users to carefully browse music and assemble playback queues. Spotify has been building up their curation features over the past year, highlighting curated playlists that are presented in the app depending on when a user opens Spotify’s Discover section. It appears that Now is based upon the company’s existing curated picks, only done with a new interface and capable of learning your taste over time.

Perhaps more interestingly, Spotify announced Running, a new feature that uses a smartphone’s sensors to dynamically adjust playlists and songs for runners based on their pace. The feature is modeled after the company’s constant mix of human curation and algorithm-powered recommendations: Running will come with a selection of new playlists for runners, but the app will be capable of adjusting songs based on the user’s listening history and tempo.

This, I believe, is an interesting venture for Spotify as it moves the service’s recommendation capabilities beyond computer algorithms and external curation. Spotify is leveraging a user’s physical activity to power music recommendations and playback. While the usage of these sensors is nothing new, applying the data they capture to something that isn’t fitness tracking is a novel concept, and a great match for an app that is already used during workouts and, specifically, runs.

Music is the perfect running companion but sometimes you need even more motivation to push on. That’s why Spotify Running is all about helping you go the extra mile.We’ve combined the best music on the planet – recommendations based on your listening history, multiple-genre playlists and original running compositions written by some of the world’s foremost DJs and composers – all tuned to your tempo and seamlessly transitioned to ensure you’ll never miss a beat. Start running and Spotify will detect your tempo, matching the perfect music in time to your step – making you a harder, better, faster, stronger runner.

For years, I’ve been imagining the potential applications of sensors and wearable devices for unexpected types of apps, such as games, mapping directions, and media playback. There is vast and untapped potential in using the context and data granted by wearable devices and smartphone sensors to make apps smarter for each individual user in a more personal way. 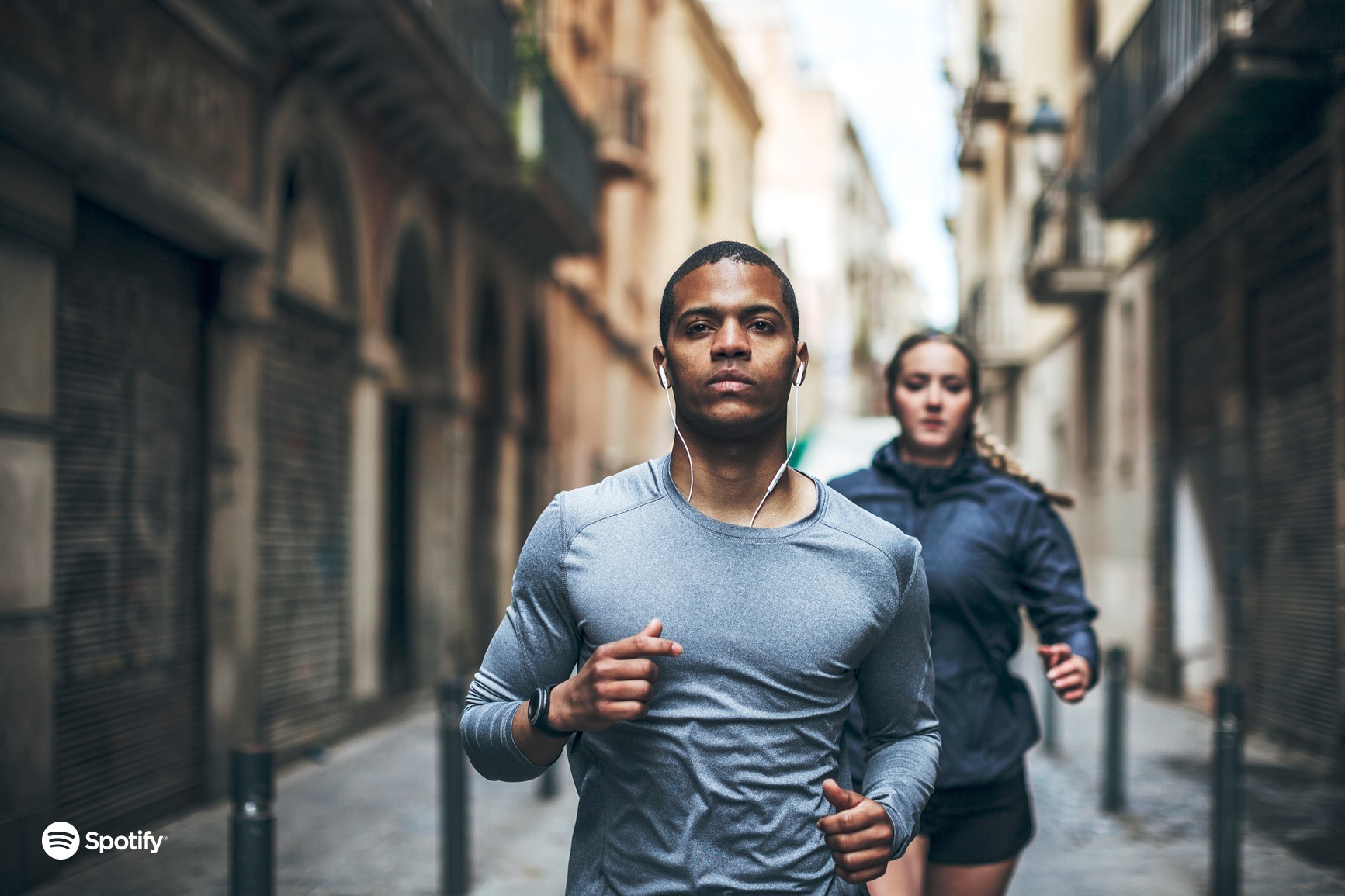 Spotify knows that their users are running with their smartphones to listen to music as they go, and they’ve decided to use sensors to provide a more accurate listening environment. They’re not stopping at the Spotify app, however:

It’s easy to imagine how a) more companies could take advantage of sensors to augment apps that aren’t necessarily fitness-related and b) how Spotify and others will eventually use a native Apple Watch SDK to have access to a user’s heart rate and offer even better recommendations and app personalization (privacy concerns will be another discussion).

It’ll be interesting to see if, just ahead of WWDC, today’s announcements will help Spotify fend off the plausible threat of the rumored Apple Music service. I find it curious that Spotify has decided to expand to podcasts and video when iTunes, YouTube, and SoundCloud have become established solutions in their respective areas, but I’m intrigued by Spotify Running and I wouldn’t be surprised to see something similar from Apple in the future.