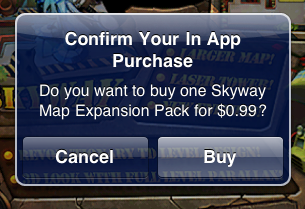 The Washington Post ran a story last night about 8-year-old Madison who, playing the Smurfs game for iPad, made a lot of in-app purchases. In fact. the family’s credit card got charged $1,400 for Smurfs accessories, power-ups and so forth. Unsurprisingly, parents are upset:

Parents need to know that the promotion of games and the delivery mechanism for them are deceptively cheap,” said Jim Styer, president of Common Sense Media, a public advocacy group for online content for children. “But basically people are trying to make money off these apps, which is a huge problem, and only going to get bigger because mobile apps are the new platform for kids.

The “people are trying to make money off apps” line is so obvious we’re not even trying to comment on that. The story gets better:

Apple said it tries to prevent episodes like Madison’s by requesting a password when making in-app purchases. And parents can change settings on Apple’s gadgets to restrict downloading and transactions, Apple spokeswoman Trudy Muller said.
But parents say changing those settings isn’t easy or obvious.

If we follow the “Apple should make it easier” argument, then every cellphone maker should put a “Kids mode” button on their latest smartphone and every car maker should create keys kids can’t touch.

The problem is, Apple gives you the tools to prevent these accidental purchases: they’re called Restrictions and they live in the Settings. Not to mention the fact that giving passwords to a kid is often considered a bad practice. Parents: next time you hand an iPad or iPhone to your kids just to “keep them happy and quiet”, think about the consequences. Because you can’t blame Apple or any other tech company if your kids break stuff.