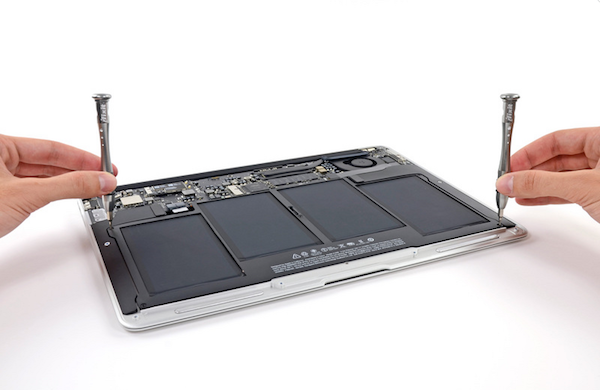 Apple’s new 11-inch and 13-inch MacBook Airs now last 9 and 12 hours on battery respectively, a 4 and 5 hour improvement over the previous generation. Lots of sites have started poking and prodding at the new machines, including iFixit, known for their great do-it-yourself gadget repair manuals.

Last year’s 7.3V, 6700 mAh battery has been supplanted by a new 7.6V 7150 mAh battery. Apple noted that Flash storage was 45% faster in this revision, and that’s due to the move from a SATA based solid state drive to a PCI Express based SSD. The AirPort card has also been updated to support 802.11ac. It’s still a very proprietary machine: RAM is soldered onto the logic board and many components aren’t meant to be user replaceable or upgradeable, despite otherwise easy access to its insides.

Wired on how Haswell saves so much power

The MacBook Air is packing a big battery, but those substantial energy savings are owned to Intel’s latest round of fourth-generation processors, known as Haswell. The new Haswell chips in today’s MBAs are part of a special low-voltage series of chips designed specifically for Ultrabooks, which Intel claims is twice as energy efficient as the previous generation.

Something to keep in mind is that the new Haswell chips in Apple’s MacBook Airs are officially Intel HD 5000 based and not Iris.

Macworld has the most comprehensive benchmarks at the moment, showing that the new MacBook Airs get substantially better read and write speeds with their new PCIe based SSDs. However, Haswell is pretty much in line performance-wise with the last generation of processors.