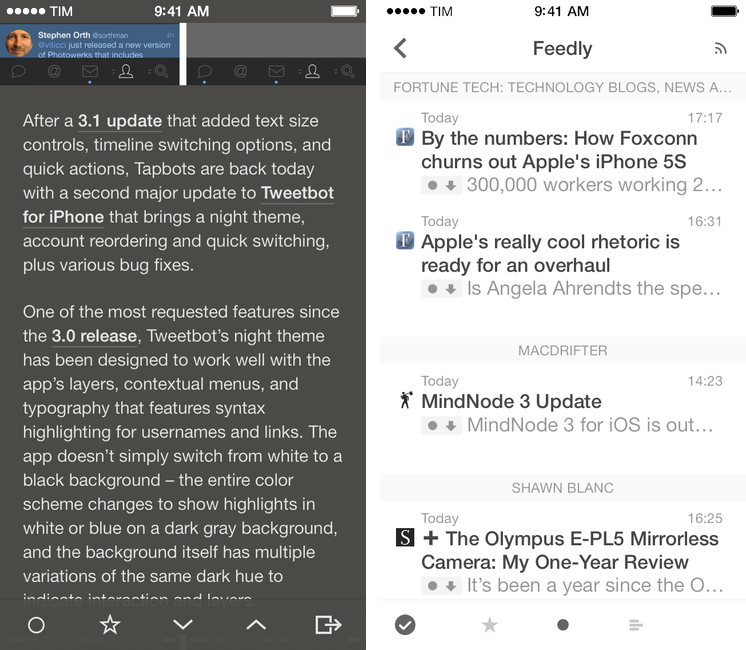 On the same day that Tapbots launched Tweetbot 3.2 with a dark theme, developer Silvio Rizzi released Reeder 2.1, which brings several fixes and changes to the app introduced in September, plus themes – including two dark ones.

The new theme switcher in Reeder 2.1, located in the style menu of the article viewer, allows you to switch between four themes: White, Light (the original one), Dark, and Gray. Choosing a theme is a manual operation, and the dark ones should help users who have been asking for a background easier on the eye while reading at night. I’m especially a fan of the Dark theme, as it’s not completely black – it’s a darker version of the original Reeder sepia hue.

The update takes care of fixing many of the inconsistencies and problems that I reported in my review. Sharing services can be configured, so you can disable the ones you never want to use; Feed Wrangler Smart Streams are listed at the top rather than the bottom; you can send links to Safari Reading List; in the article list, feeds can be grouped by date or feed, which is a welcome addition for those who don’t simply want to skim headlines sorted by date.

There are many other changes and tweaks that Rizzi has documented in the app’s release notes; for instance, the speed of some transitions has been cut and the “bouncy” effect reduced, and landscape support has been improved. Reeder continues to be my RSS app of choice on the iPhone, and while Rizzi still hasn’t reworked areas of the app that feel outdated (especially in the sharing department) or shipped brand new features (such as deeper API integration with Feedly), the changes in this release bode well for the future.

Reeder 2.1 is available on the App Store.