I think the incredible thing about an app like Paper is that it allows someone like me to feel like an artist, even though I’m clearly not. It’s an app that brings out childlike joy and creativity in people who’d otherwise say they have no ability to draw or paint well. Paper is probably one of the most interesting apps on the iPad to look at for this reason; it manages to capture the essence of what makes doodling something on paper so fun, without making you feel inadequate thanks to its decidedly simple presentation and a carefully chosen color palette (originally: black, gray, white, orange, yellow, blue, green, and violet). Paper launched with just nine colors and five basic tools.

Today’s update further addresses another common feature request. While people have submitted some really amazing things to Made With Paper, I’d expect to see even more spectacular drawings thanks to the addition of the Mixer, Palettes, and support for the Pogo Connect. Not only have FiftyThree added more colors, they’ve added all of the colors. 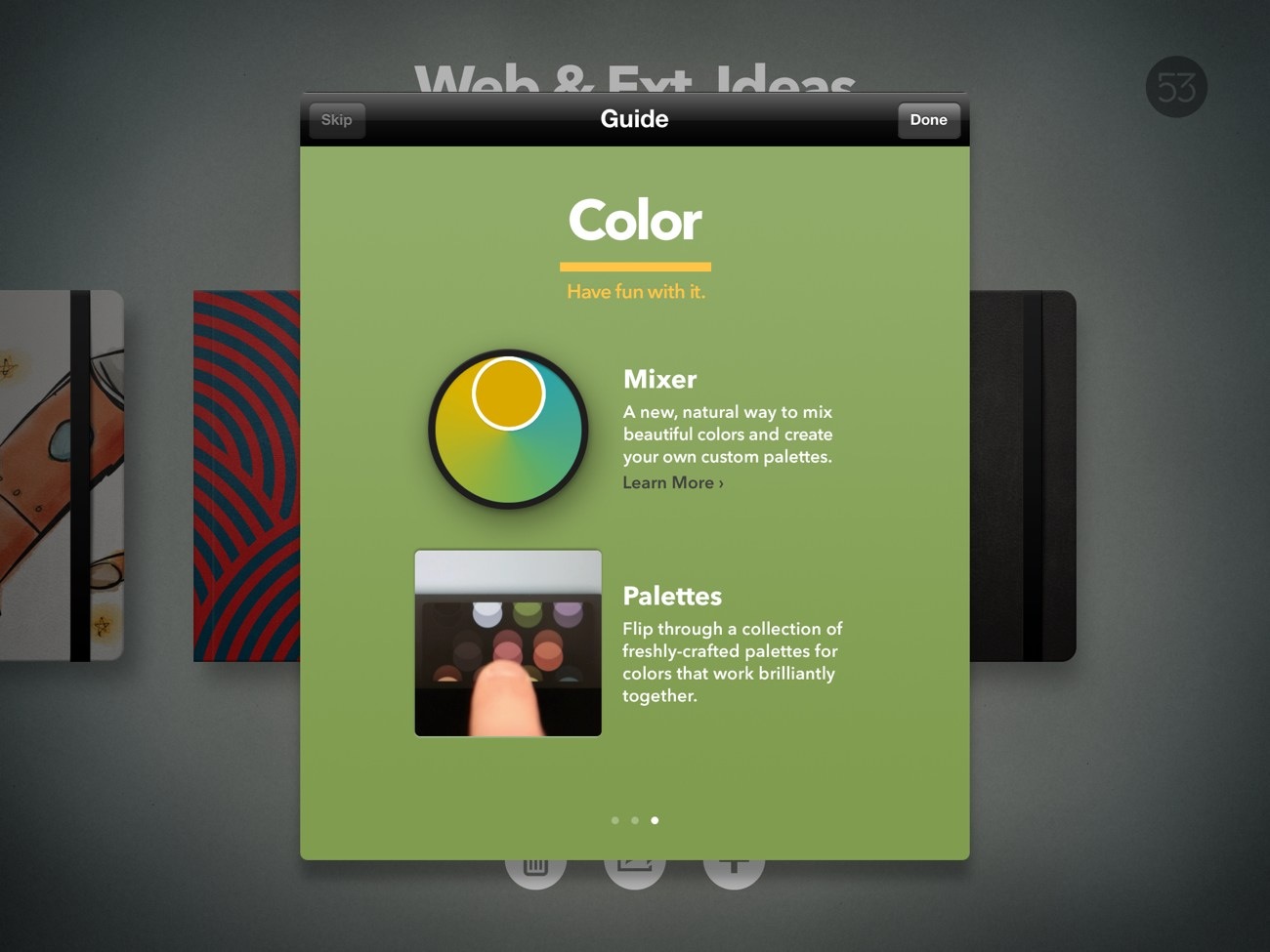 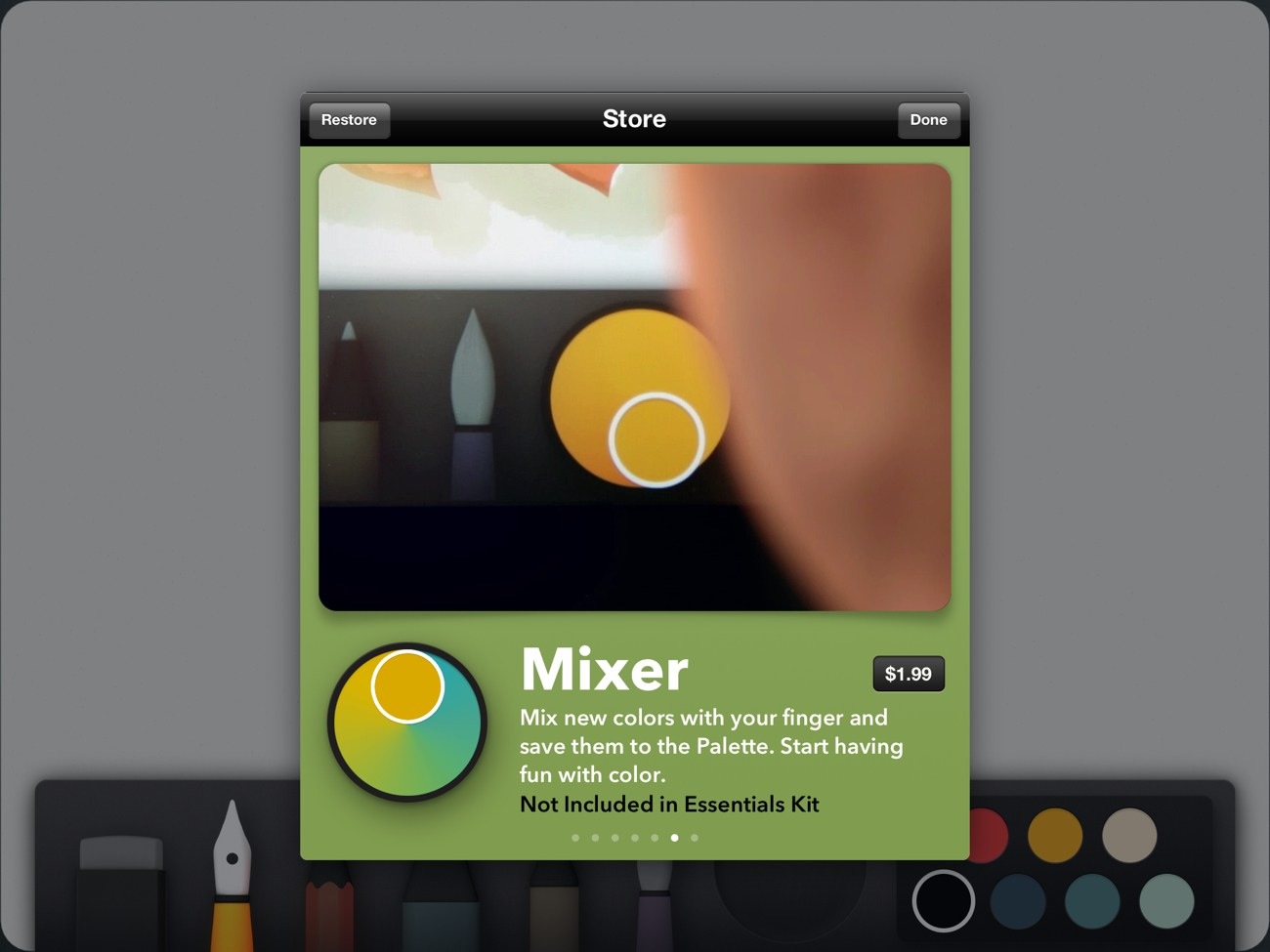 Whether you utilize Paper’s new toolset is completely up to you. The Mixer and custom color Palettes can be had at an additional cost of $1.99, separate from the Essentials that you may have already purchased for $6.99. The Mixer is an amazing tool, which lets people swirl colors together from Palettes in a clockwise motion. Alternatively, tapping the mixer brings up color scales which lets you manually select the perfect color with hue, saturation, and shading sliders.

Out of the box you’re given four new color Palettes to use. These Palettes are somewhat hidden: swipe up and down, or left and right on the color swatches to switch between them. Even if you don’t buy the Mixer, FiftyThree has added multiple new default colors that are great for skin tone and more vibrant scenes. Purchasing the Mixer adds two empty color palettes, and lets you override the default colors in the initial four if you desire. Simply drag the color selected in the Mixer to a swatch on the Palette to replace it.

The Expressive Ink Engine has also been updated with support for pressure sensitivity, taking advantage of Pogo’s new Pogo Connect. The added support for Wacom-like input will contribute to an overall more fluid and natural drawing experience, although you may have to wait until the Pogo Connect becomes available on November 18th (available for $79.95, and perhaps a great stocking stuffer).

If you’re already invested in Paper and use it often, I see no reason to pass on the Mixer. It’s an invaluable tool and it’s remarkably simple. The $1.99 in-app purchase adds an infinite amount of colors to an app that already offers a well chosen selection, now grouped into four palettes (and with even more default colors than before). Adding the cost of the Essentials and the Mixer together, owning all of the tools in Paper brings the total to $8.98, which is fair given FiftyThree’s excellent design and impressive ink engine. Paper is a free download from the App Store, and with the exception of the Mixer, you can try all of the tools before you buy them.