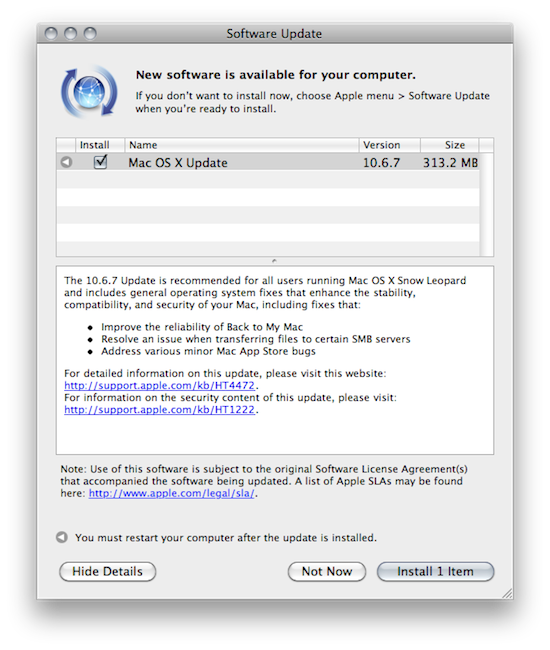 Apple just released Mac OS X 10.6.7. The new version is available now in Software Update (or through the direct links below) and weighs at around 300 MB. The new build includes a series of fixes for Back to my Mac, SMB servers and the new MacBook Pros.

The 10.6.7 Update is recommended for all users running Mac OS X Snow Leopard and includes general operating system fixes that enhance the stability, compatibility, and security of your Mac, including fixes that:

Improve the reliability of Back to My Mac

Resolve an issue when transferring files to certain SMB servers

For detailed information on this update, please visit this website: http://support.apple.com/kb/HT4472.

For information on the security content of this update, please visit: http://support.apple.com/kb/HT1222.

For information about the security content of this update, please visit article HT1222.

Addresses an issue with MacBook Air (Mid 2010) computers that could cause a kernel panic.

Address issues in the AirPort driver for certain devices.

Addresses an issue where DVD Player may display black video on some Macs using the 64-bit kernel.

Addresses an issue with some NEC displays in which the screen may appear black when connected to a Mac Pro (Mid 2010).

Fixes a problem opening an afp:// URL that points to a file, and changes the AFP mount path to conform to previous Mac OS X releases. For details, see article HT4538.

Fixes a rare issue in Mac OS X v10.6.5 that could cause user accounts to disappear from the Login window and System Preferences after putting the system to sleep.

Improves the reliability of dragging files or folders to the Trash when using an NFS home directory.