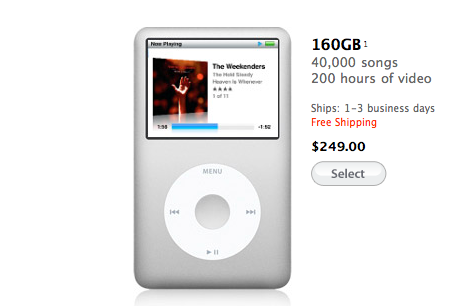 As noted by AppleBitch, it appears that iPod Classic stock is running low and several retailers (including Amazon and Apple Reseller J&R) have the device backordered or out of stock. Amazon’s page for the iPod Classic says the unit will ship in 2-4 weeks, and Target shows similar shipping times. The Apple online Store went through some changes last week as well:

The Apple Store shows that the silver iPod Classic now ships in 1-3 days, down from 24 hours last week. In addition, Best Buy has updated their website to say that the device is backordered for 1-2 weeks (last week it was shipped in 1 day) and Target also has it backordered for 2-4 weeks. Currently the shortage only seems to be affecting the silver colored model, the dark colored version appears relatively unaffected.

It is worth noting that the iPod Classic line was last updated in September 2009; several tech pundits predicted Apple would discontinue the product due to the lack of any announcement at last September’s music event (where Apple refreshed the entire iPod family except for the Classic). Recent reports also suggested Toshiba’s new 1.8” drives may bump the capacity of the Classic to 220 GB up from 160 GB, although it is unclear whether Apple may still be planning on using hard drives for its mobile devices instead of widely-used flash memory.