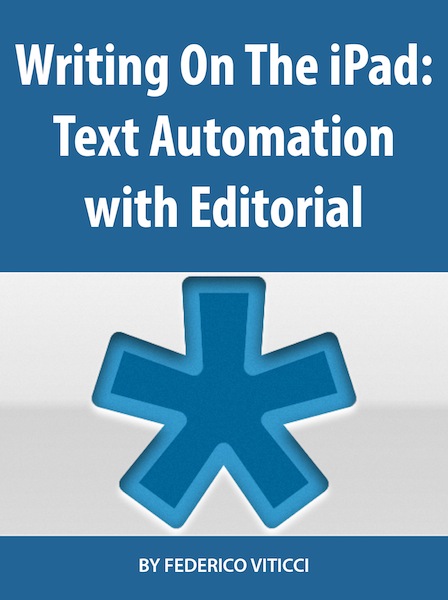 My first book is now available on the iBookstore. It’s an extended edition of my Editorial review that comes with:

Longer version (based on the book’s Preface)

Editorial is a text editor for the iPad that supports Markdown, syncs documents with Dropbox, comes with a snippet system to speed up typing, and – a feature that truly makes it stand out from similar apps – is powered by workflows and scripts to automate writing, editing, and publishing. Editorial is developed by Ole Zorn, an independent software developer based in Germany. Editorial was released on August 15th, 2013; prior to the public release, I had been testing the app since late November 2012.

“Writing On The iPad: Text Automation with Editorial” contains my review of Editorial with an in-depth explanation and critique of the app’s numerous features and workflow tools. My goal with this book is to provide a convenient, portable resource to learn more about Editorial, how the app changed the way I work on iOS, and how, through Editorial’s automation, scripts, and workflows, it’s possible to turn an iPad into a powerful tool for writers.

Originally, my Editorial review was here published at MacStories.net on August 15th, 2013, when Editorial for iPad was released on the App Store. However, following many readers’ suggestions due to the length and scope of the review, I decided to offer an iBooks version of it. “Writing On The iPad: Text Automation with Editorial” contains the original review reformatted for iBooks, plus 20 extra workflows and 5 additional videos. You can consider it a “Director’s Cut” edition of my Editorial review, now available in a multi-touch interactive book made exclusively for the iPad and iBooks.

The exclusive workflows included in the Extras chapter are:

Alongside converting the review to the iBooks format and including new content, I also updated screenshots for Retina displays, created galleries to group multiple screenshots together, and annotated some screenshots to better describe the user interface of Editorial. The videos have been enhanced with textual overlays for comments, and I’ve created a glossary for common terms used throughout the book.

I consider this the best version of my Editorial review. Thanks to iBooks’ interactivity, clean layout, and embedded rich content, I hope that you will enjoy a pleasant and convenient reading experience that should help you in getting started with Editorial and understanding the capabilities of advanced workflows and iOS automation – an area that is often underestimated, but quickly growing among the iOS power user community.

I hope that you’ll like what I’ve done. This is a new experience for me, and I would love to receive your feedback either via email or Twitter.

Once again: my new book is available here, and it’s $2.99 for a limited time.