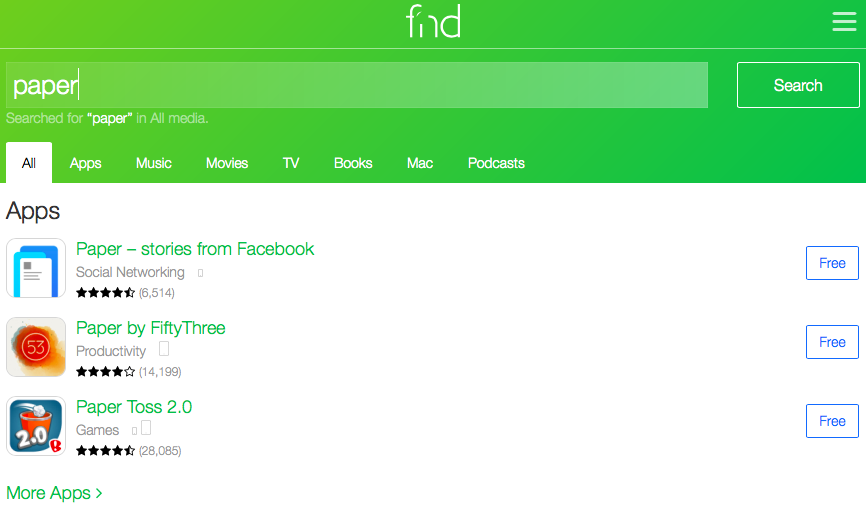 Created by Jeremy Mack and Ryann Pierce and launched during EmberConf yesterday, fnd is a new iTunes search tool that allows users to search for any kind of iTunes content through a fast and responsive web app available at fnd.io.

While Apple’s iTunes and App Store clients for OS X and iOS ship with search and browse functionalities built-in, they aren’t, arguably, the fastest or most efficient ways to scroll through hundreds of items and find a specific song or app on the iTunes Store’s vast catalogue of content. On desktop computers, search through iTunes is slow, clunky, and based on an old iOS 6-inspired design that is inconsistent with Apple’s revamped iTunes Store and App Store apps on iOS 7. On the iPhone, the native App Store client received solid improvements in iOS 7, but search is still limited to cards; in general, given the lack of an iTunes app for iOS devices, there’s no unified solution to search for any kind of iTunes media in a single app/service on iOS, and that’s one of the areas that Mack and Pierce focused on with fnd.

“In August 2013 I became enamored with Launch Center Pro. However, the App Store search was entirely broken, by no fault of Launch Center Pro”, Mack told me over email earlier today. When I asked about the reason fnd came to be, he recounts how the first quick prototype evolved into the final project: “I wanted something better, so I made a prototype using Ember in three hours. I almost shipped the prototype and called the problem solved. However, over the next week using fnd, I discovered there was something amazing about having a web experience for the App Store that worked on all devices. Being able to share a link with a friend that doesn’t this and then this to happen. I pitched the idea to my talented designer-friend, Ryann Pierce. She loved the idea and wanted to team up on the project. Our collaboration drove fnd to what it is today.”

fnd’s search is fast and displays a clean vertical list of results organized in sections. The ranking of results itself isn’t different from what you normally see on iTunes – fnd uses Apple’s API to load content from iTunes – but it’s incredibly quick and it provides a good balance of information density and whitespace. 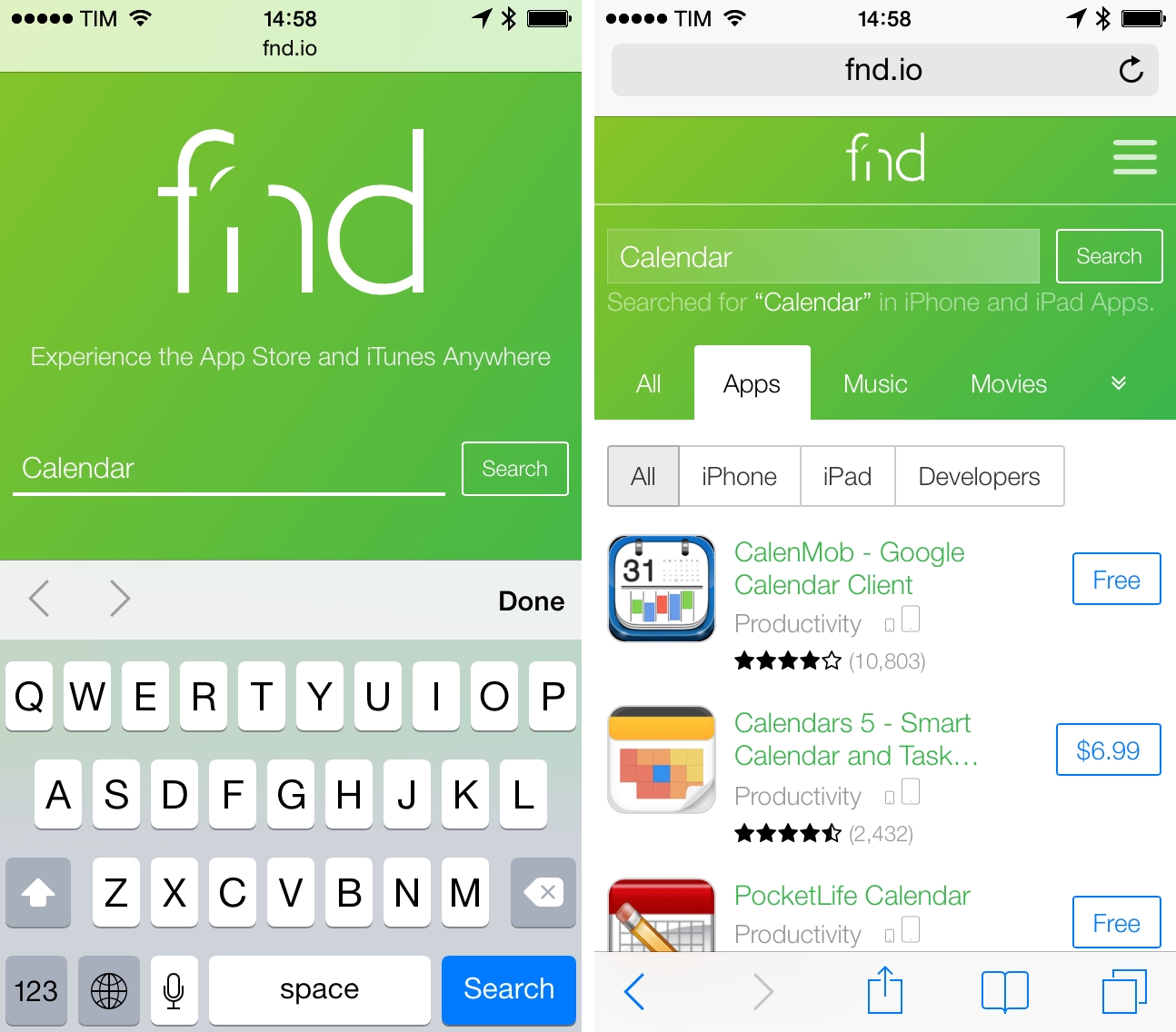 Media categories from the iTunes Store (Apps, Music, Movies, TV, Books, Mac, Podcasts) are displayed as tabs; clicking one reveals sub-sections such as iPhone/iPad/Developers for Apps, or Authors/Books/Audiobooks for Books. Once results have been loaded in the “All” section, switching between categories and filters is easy and quick – especially if you’re used to search on iTunes on the desktop, the difference is noticeable. On the service’s About page, the developers list Ember, Brunch, Bootstrap, and CoffeeScript (among others) as the technologies powering fnd.io. When I asked about fnd’s performance, Mack explained that “fnd has no server, it talks directly to the App Store and iTunes from your browser”, adding that “Ember makes fnd otherworldly-fast”.

Product pages have also been recreated in fnd, along with some extra features to bring more context to results. Apps have full descriptions, product information, screenshots, customer reviews, and a Buy button to launch iTunes; Podcasts show descriptions, reviews, and streamable episodes; TV episodes show episodes and reviews. For every media type, fnd adds YouTube results to add video previews to iTunes, which can help for apps. YouTube results haven’t always accurate or related to the item being showed in my experience (an example), but they’re a welcome addition overall. For apps, fnd doesn’t support the What’s New, Version History, and Related options of Apple’s iOS 7 App Store, likely because they’re not exposed in the iTunes API. Similarly, while fnd has a separate section for iTunes charts (and it’s well done, as it queries the chart API live from your browser), the service doesn’t replicate Apple’s front page of the iTunes Store or App Store, it doesn’t display custom sections created and curated by Apple, and it doesn’t load featured items or track price drops for apps over time. 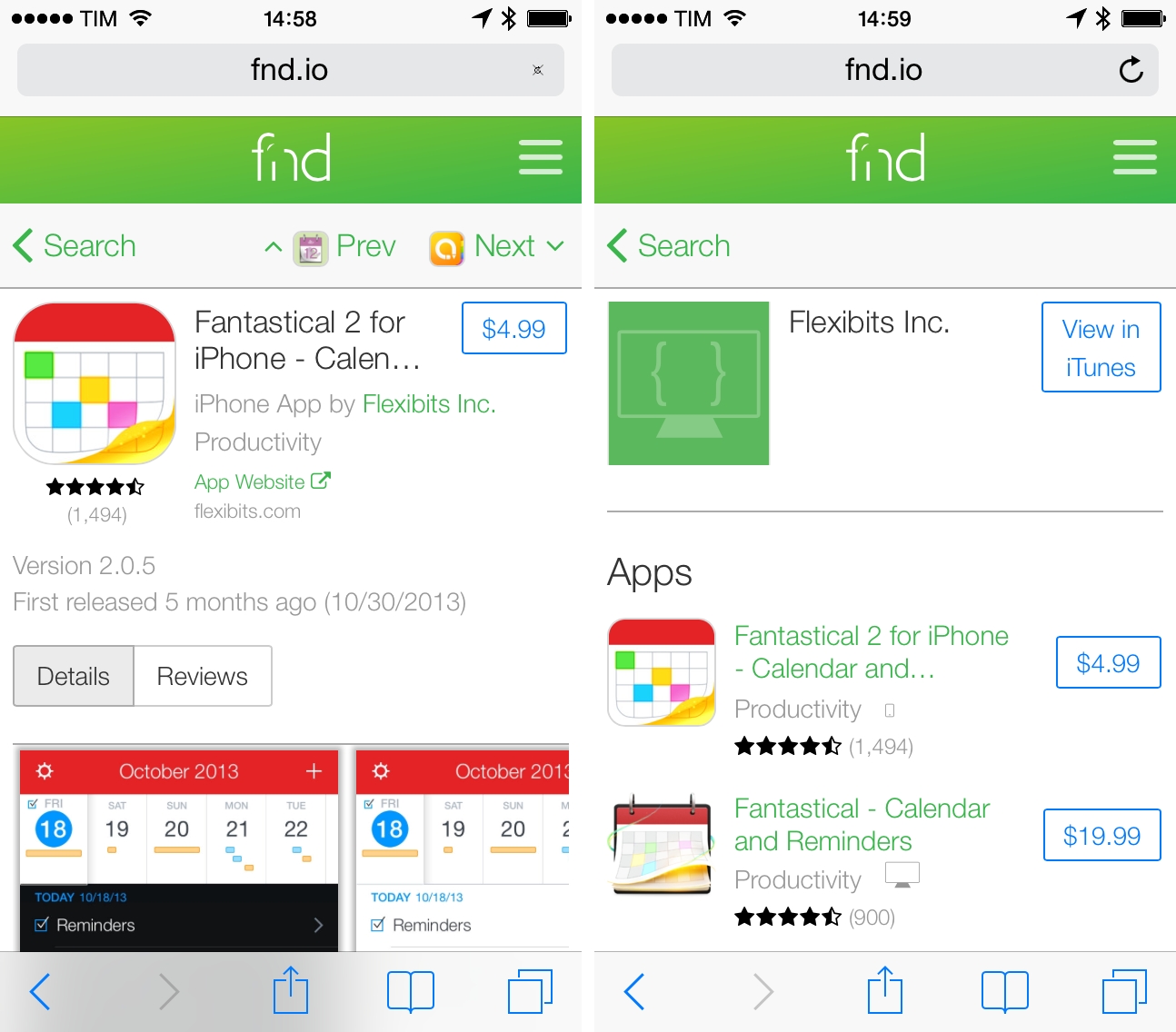 Still, in spite of its evident limitations, fnd is an impressive experiment in how it conveniently brings iTunes search to the web with a fast, responsive website that supports mobile devices and even integrations with third-party apps like Alfred and Launch Center Pro. fnd may not be the first service to use the iTunes API to display iTunes content on the web, but it’s certainly been the fastest in my experience. The website can be bookmarked on an iPhone or iPad for easy access from the Home screen, and, in my tests, I’ve been enjoying the possibility to quickly search and browse charts, opening product pages in separate tabs in my browser – something that Apple doesn’t allow with the iTunes and App Store apps. Results in fnd come up immediately, and you don’t have to scroll through long carousels or lists to find what you’re looking for.

Mack is aware of the early nature of the product and has bigger plans for fnd: “You use Google to search for pages. Yelp to search for restaurants. Twitter to search for tweets. fnd is for searching for digital media”, he said, noting that the service tries to always present the most accurate result for each query. “Today you’re seeing the tip of the iceberg of what’s capable with fnd”, Mack told me. You can try fnd from any web browser here.