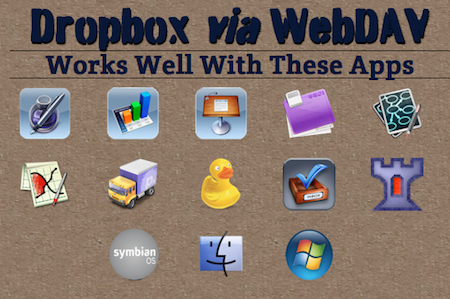 If you’re a heavy user of the iWork suite for iPad or the recently released OmniOutliner and have been looking for a way to easily keep documents in “sync” across machines, you’ve probably already heard of DropDAV. By providing a WebDAV interface to your existing Dropbox account, DropDAV allows you to export documents using iOS apps’ “save to WebDAV” function, and have your docs conveniently saved on the desktop. Because DropDAV simply gives Dropbox the capability of becoming a WeDAV server, you’re not really “syncing” documents when you use Pages or Number for iPad –rather, as these apps already use WebDAV, you’re given the option to at least save to Dropbox. That’s something.

The first version of DropDAV, launched a few months ago, became so popular that the developers had to rethink the service from the ground-up and rewrite the whole engine to support the latest WebDAV standards, offer more speed and reliability, and find a pricing model that would keep operations going. DropDAV 1.0, in fact, was free if you were connecting to a free 2 GB Dropbox account, and asked you to pay only if you had a paid Dropbox account. With version 2.0, officially announced two days ago, gone is the freemium model and the differentiation between free and paid Dropbox accounts: DropDAV now has a 14-day free trial, and after that it’s $5 per month. Simple. The developers explain they’ve completely rebuilt DropDAV to be faster, more compliant to standards and less prone to server-side errors; by integrating with the powerful Dropbox API, DropDAV still allows you to virtually export to WebDAV from any app that supports the protocol, and have documents actually offloaded to Dropbox. It works really, really well and, from what I can tell after a quick test (I’m a subscriber), it’s seriously faster and improved. From a technical standpoint, the devs write:

We identified inconsistencies in the way PHP and the OAuth Pear plugin worked with UTF-8 strings. We created a taxonomy of WebDAV clients, sorting out which ones behaved similarly. We integrated in support for WebDAV locking to comply with the Class 2 specifications.

In the end, we bridged our legacy implementations of WebDAV’s hairier functions (written in PHP) with the native UTF-8 support and better Dropbox client in Python. We settled on an implementation that includes extensible request parsing in PHP, communication with Dropbox in Python, then extensible response formatting back in PHP. It’s a lot cleaner than it sounds, and it works really, really well for the entire UTF-8 character set and XML Special characters.

Class 2 support is still a work in progress. In truth, it’s somewhat of a hack in that Dropbox doesn’t support locking, so we could only create the illusion of locking for our WebDAV clients. We think we’ve done that well enough to roll out and will continue improving it to eventually pass the Litmus test in the coming weeks.

If you haven’t checked out DropDAV already, here’s your chance to start a free trial and connect the service to your Dropbox. It works great with the iWork suite, The Omni Group’s apps and a variety of file managers for OS X and iOS (such as iFiles), and it’s probably the best shot you have if you don’t want to go insane with Pages and exporting files in iTunes.