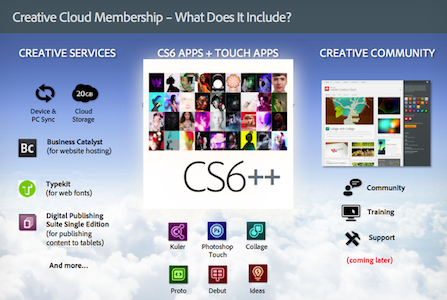 Adobe today announced details of its new Creative Cloud service that will launch in a few months time alongside the Creative Suite 6 release. Priced at $49.99 per month, when signed up for a year’s subscription, the service offers users the full Creative Suite 6 bundle of applications along with 20 GB of cloud storage for device and desktop syncing of documents. The price may seem high, but for those who use Adobe’s Creative Suite and like to be on the latest version, $600 per year may be a good price. Particularly when the alternative is the $2000 up-front cost of each major version, which typically hit every second year.

Adobe Creative Cloud will be available worldwide in the first half of 2012. While traditional licenses of CS software will still be offered, a membership to Creative Cloud provides more benefits than simply owning desktop software. You’ll get all the CS tools, Adobe Touch Apps, and services, plus new features, products, and services as soon as they are released — meaning immediate access to the latest Adobe innovations at no extra cost.

The Adobe Creative Cloud will also include all of Adobe’s touch apps, the Business Catalyst, TypeKit and the Digital Publishing Suite. Lightroom 4 and new web-authoring apps Muse and Edge will also be included in the service’s offerings once they launch. Users will be able to download all the apps individually and on up to two different machines.

Adobe is promising to deliver major new feature updates to their CS6 apps after they launch, many of which will be exclusive to the Creative Cloud service - they blame subscription accounting issues as the reason why it won’t also be delivered to up-front customers of CS6. For businesses, Adobe is set to also introduce a team option that will include additional collaboration and security features for the service - that will set companies back $69.99 per user.