Hello, my name is Chris and I’m a twitter client addict. I usually download and try them all. It can be a beta, official release, iPhone, Mac - it doesn’t matter. So today we have a new contestant to the Mac - Weet. It’s handcrafted by Raptor Apps and Marcelo Marfil. The iPhone version was released last week; it’s very good for a 1.0 release, check for an in-depth review soon by Federico. Anyway, a tweet just came across my timeline that showed us a little taste of what could come. 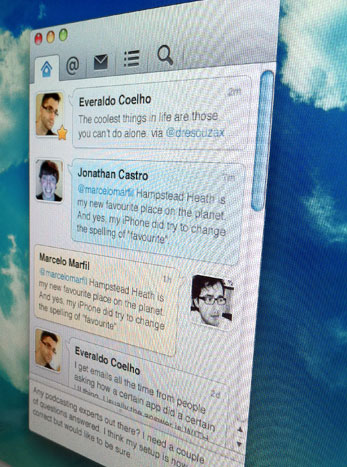 There’s not much shown but a icons, a timeline and a compose box, so we’ll have to wait to see what else this one brings to the game. It ‘appears’ very minimal like Itsy and a UI similar to the iPhone version of Weet. The ‘leaked’ screengrab is getting great reception on twitter today. Even though Tweetie 2 for Mac is alive, people are always on the search for a new superhero desktop client, let’s hope this one can fly.