Starting today Ping, iTunes’ new social network for music, and Twitter are making it even easier for people to share music discoveries with their friends by putting Ping activity, song previews and links to purchase and download music from the iTunes Store right in their Tweets on Twitter.com. 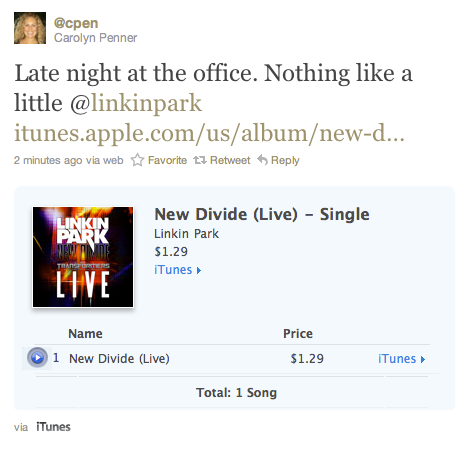 Basically, you can link your Ping profile to your Twitter account and find Ping users among the people you’re already following on Twitter. Once the accounts are linked, your Ping activity will be mirrored to Twitter, and thanks to NewTwitter’s rich embed panel you’ll be able to see song previews and iTunes links directly in the Twitter home page:

When you click on a Tweet that’s sent via Ping or that contains an iTunes link, you’ll see the song or album in Twitter’s details pane, with the ability to listen to song previews from iTunes, making the experience even richer.

iTunes song previews are available on Twitter.com in the 23 countries where the iTunes Store offers music.

This is a huge step forward for Ping, which is still lacking Facebook support. Ping, however, just got a lot more connect and, perhaps, useful with the addition of Twitter.