We know that Apple is very strict about apps approval process, and we all know the story of applications rejected because of violations of the iPhone Developer Agreement. If you don’t follow the rules, you’re rejected. Simple, right?

There are a few exceptions though, and you can blame the app review team or the lack of more specific rules in the agreement for them. Thing is, sometimes a developer works hard on an application, thinking it’s perfectly compliant to the agreement, and then he sees his app rejected with no understandable reason. Sometimes, someone forces Apple to remove an app - yeah, that happened, too.

Now imagine this: there’s a RSS feed publicly available on Apple’s website and a dev builds an app around it. Anyone could build an app around it, being it a public RSS feed, available for free to everyone. In this case, we’re talking about Apple’s Trailers page and an iPhone app developed by Jonah Grant.

Jonah developed an app to access the Trailers’ feeds and display the results in a much more enjoyable iPhone-optimized interface. You can read descriptions, stream trailers, check out the movie poster and share the trailer. It’s interesting, and it looks good. It could be one of those apps Apple promotes on the App Store front page.

Jonah writes on his personal blog:

“In May I started working on an iOS (universal, so it works on iPhone and iPad) app for watching movie trailers and viewing corresponding information about that movie such as the director, cast, synopsis, poster, release date, and an array of sharing options (email, SMS, Facebook and Twitter). I spent almost all of June working on it, almost every day. 100 hours of work, at the least went into this. I was beyond proud of it. Probably one of my favorite things I’ve ever made. I’ve never played with an app that I’ve made for as long as this one.”

So he submitted the app for approval, knowing that he wasn’t doing anything against the rules. But, it got rejected. Why? Because there’s no public API for Trailers. Wait, wasn’t it a simple RSS feed?

After he got the rejection email Jonah tried to contact a friend at Apple, close with the App Review Team, to see what he could do. Boom, the app went back into review - he thought it was going to be approved. Later, he received a voicemail about the second rejection.

“In my response, I talked about how there are dozens (maybe even hundreds) of applications that scrape various feeds with content provided by Apple, such as featured applications or top 10 songs on iTunes. I called him about an hour ago to talk about my response. He told me that scraping iTunes feeds are strictly against the developer agreement. But the problem is, the feed that I use to obtain trailer information is not a part of iTunes. It’s from apple.com/trailers. It’s basically a RSS feed, available to anyone who knows how to type in a URL. So I asked him why it is against the rules to use, even though it’s publicly available. His response? You can’t scrape iTunes feeds.” 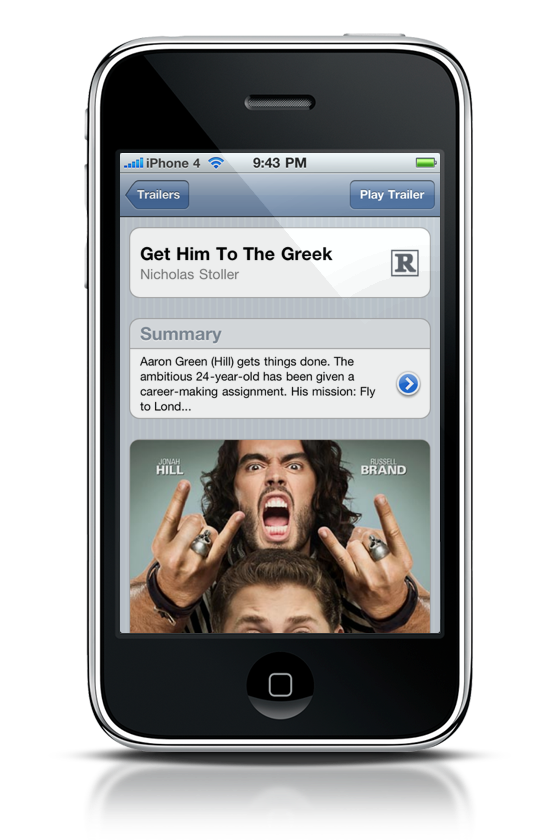 This sounds a little bit absurd to me. We can stream trailers and read descriptions on our Macs, we can access the public RSS feed yet a developer can’t build an app around it? And what about iTunes feeds? As Jonah also notices, there are hundreds of apps (some even featured by Apple) that collect information from iTunes and display them in-app. But let’s go even further, here’s what Apple said about trailers, technically:

“The point Apple makes to me (both the man who called and other representatives I’ve spoken with) is that I cannot stream the trailers, as it is the movie studios content. Now this, this is absurd. First and foremost, you can download the trailers via the site, and on iTunes. So what’s the difference between downloading the trailer on your Mac, then syncing it to your iDevice? Nothing. There is none, other than my way is a hell-of-a-lot easier. Second, what are the faults of me using the trailers? Spoiler: there are none, but [Apple] Legal wants to make it seem like the world will come to an end if I use them. After all, it’s free advertising for the studios. What’s next, websites start asking Apple to block them from being viewed on the iPad because they can see copyrighted content? It’s insane. All of the information is public.”

I really don’t know what to think about this. Either Jonah is seriously stupid and hasn’t read the iPhone Developer Agreement like he should have (I doubt it) or the App Review Team wasn’t prepared to deal with app that pulls Trailers data, so they rejected it.

We’ll keep you posted about this.

UPDATE: Jonah sent an email to Steve asking about the rejection of Trailers. Here’s the conversation:

I did find this information out very late in the development process (close to release) and I was skeptical on the situation because there are many applications in the App Store that scrape iTunes/Apple feeds, including ones that have been featured in the App Store and in the top 10. There are even a few that use the same feed/API that I do. To name a few, Filmtrailers, iTrailers, and Trailers (also known as Trailers US)

If ten guys rob a bank and don’t get caught, that isn’t much of a defense if you do.

Sent from my iPad

I guess I see your point there. Thanks for the information, but in response, the app is free so I’m not charging for the studios content, and it benefits the movie studios by advertising their movies to whomever downloads the application, and benefits Apple with ad revenue (app includes iAds)