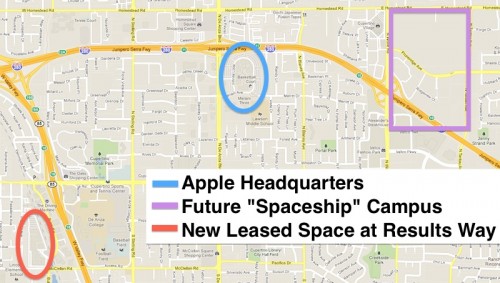 Early last month Steve Jobs unveiled the new “spaceship” campus that Apple hopes to build in Cupertino by 2015. The main reason for it, as Jobs noted in his presentation to the city council, is because “Apple is going through remarkable growth”. That growth has already started so as a result Apple has felt the need to lease out some other buildings in Cupertino for the period between now and when the new campus is complete. A report today in The San Jose Mercury News claims that Apple has struck a deal to lease a big office campus in Cupertino, located near the De Anza College.

The office campus they have leased is the old Measurex campus, which is now known as the Results Way Corporate Center and occupies roughly 373,000 square feet. Based on parking ratios supplied by the City of Cupertino, Mercury News believes up to 1,300 people could work in the new temporary Apple campus.

The campus consists of nine buildings and has been marketed by a commercial brokerage firm. Mercury News got the confirmation that Apple has leased the buildings from Kelly Kline the City of Cupertino’s economic development manager. She said to Mercury News that “this is all good news for the city, Apple is the premier corporation in Cupertino”. Kline also noted that she expected Apple to do some renovation work before they move in to the temporary campus.

[Via Mercury News, Image by MacRumors]