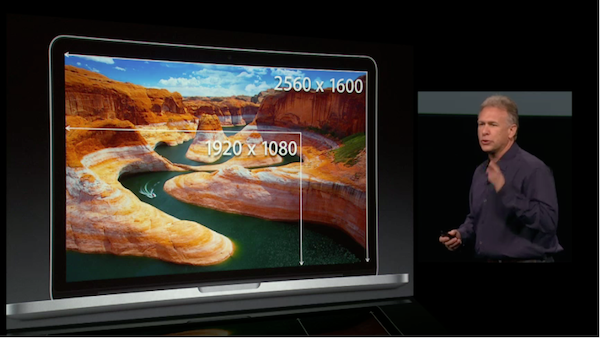 During this afternoon’s Apple Special Event at the California Theater in San Jose, California, Phil Schiller announced the availability of the 13-inch MacBook Pro with Retina display, starting at $1699 for the base model.

The 13-inch MacBook Pro with Retina display features a 13.3-inch LED-backlit IPS display supporting a 2560-by-1600 (Retina) resolution (the world’s second highest resolution notebook computer), is lighter at 3.57 pounds (a pound lighter and now Apple’s lightest MacBook Pro), and is thinner in profile at 0.75 inch high (20% thinner than the previous generation). Connections include a Magsafe 2 power port, two Thunderbolt ports (10 Gbps), two USB 3 ports, a HDMI port, a SD card reader, a headphone port, a FaceTime HD camera (720p), and dual microphones. Inside the chassis, Apple starts their base model with an Intel Core i5 dual-core processor, 8 GB of onboard memory, and 128 GB of flash storage. Integrated Intel 4000 graphics is also present for graphics and video. For networking and wireless peripheral connections, Apple’s latest models support 802.11n and Bluetooth 4.0. As with its 15-inch sibling, the new 13-inch model nixes the optical bay (Apple USB SuperDrives can be purchased separately to read, rip, and burn CDs and DVDs).

Configurable up to a dual-core Intel Core i7 processor and 768 GB of flash storage (8 GB is the maximum amount of memory offered by Apple), the 13-inch MacBook Pro with Retina display is offered in two models:

Updated at 2:27 pm with additional pricing and model information.