At its I/O keynote earlier today, Google announced that it would venture further into messaging and video calling with two new apps: Allo and Duo. A familiar combination of text messaging and video chat, the two will provide a new way to chat with friends and obtain useful information within Google’s ecoystem.

The apps, which will be released this summer, will come to both Android and iOS, directly challenging the latter’s own iMessage and FaceTime services. Although Google did not put a strict release date on Duo or Allo, it did offer a sneak peak of what’s next. 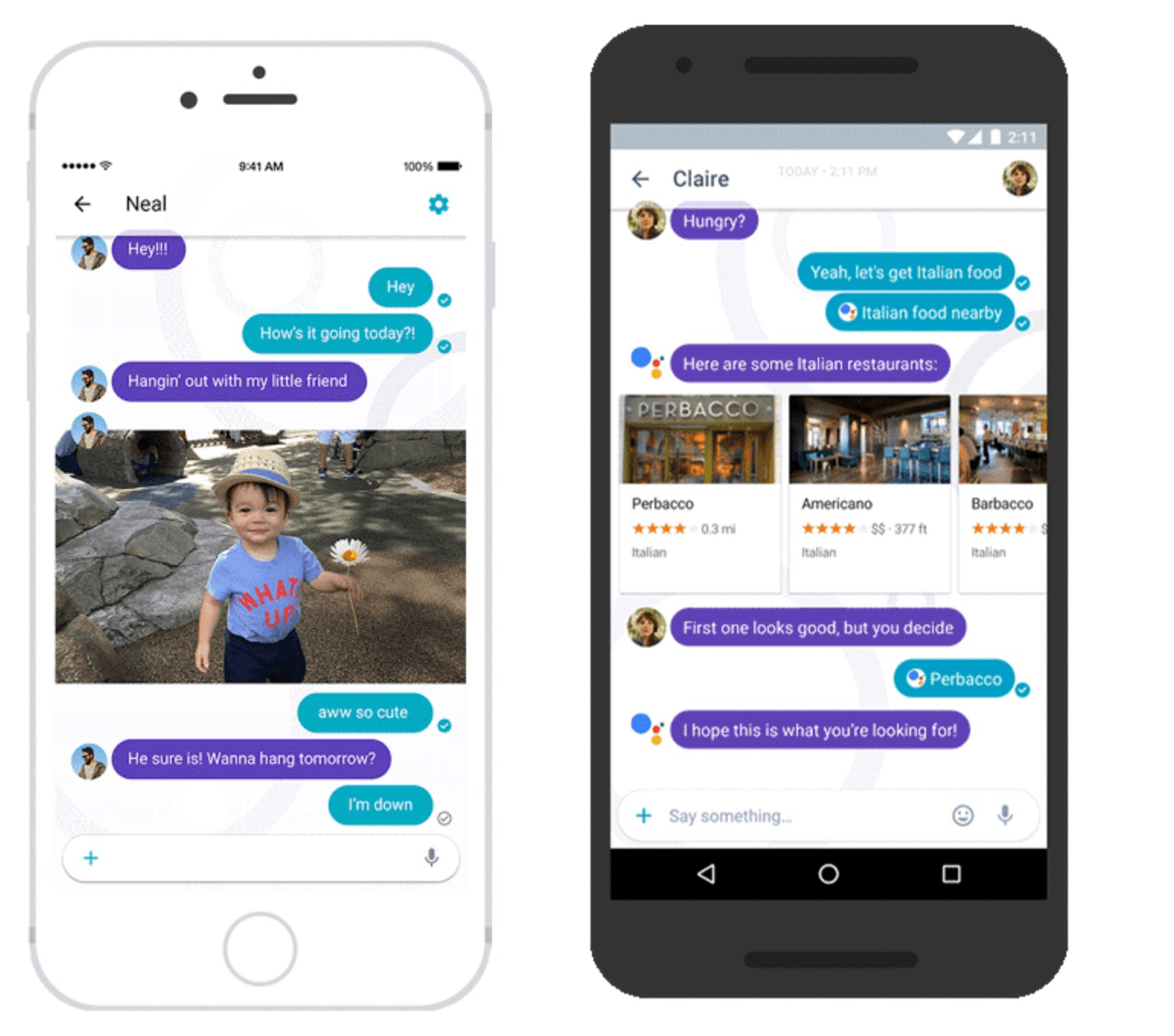 Drawing inspiration from iMessage, Slack, and Google’s own Inbox, Allo looks to enrich the messaging experience by providing contextual information in a typical conversational format.

Allo lets you communicate with anyone in your phonebook—both Android and iOS. #IO16 pic.twitter.com/nhpxGJDRGP

Based on your phone number, Allo will use your contacts to create a conversation. In many ways, Allo is a familiar messaging app, promoting back-and-forth conversation and displaying the responding status of the other party. However, Google has added a few features to make conversing easier and smarter.

Mirroring Inbox, Allo supports Google’s Smart Reply system, a feature that scans the conversation and presents pre-written responses for your choosing. This can be anything from a simple “Hello!” to a response to a dinner request and, more impressively, a comment on a photo. Google claims that Smart Reply can identify the context of the action in a picture and suggest responses based on what it’s seen. As with much of Google’s software, the service will learn how you interact and adjust its replies based on your language patterns.

Within a conversation, Google will present relevant search results based on the information you type. If, for example, you wanted to suggest to your friend that you should get coffee, the assistant would display an option to perform a search for coffee shops nearby.

After selecting the search, the assistant will insert options in a carousel with rating and distance. Choosing one of the shops would provide the opportunity to call, make a reservation, and so on. This isn’t limited to restaurants, of course, and Google said that it will be working with developers to bring tailored results straight into your conversation.

The assistant also works by itself, using natural language processing to perform actions like searching the web or getting the day’s schedule. One example from the keynote involved asking the assistant in a private conversation the result of the user’s favorite team, returning the latest result for Real Madrid.

Allo provides a simple way to send and draw on pictures – when sending an image, a pencil icon can be selected to write on the image. This was only demoed for a few seconds, so it’ll be interesting to see the customization options this features.

Also included is “WhisperShout,” a method for adjusting the text size to fit the desired message. By tapping and holding on the send button, users can slide a finger up or down to change the size of the message.

Incognito mode also makes an appearance in Allo, providing “end-to-end encryption and discreet notifications” for conversations. According to Open Whisper Systems, the company is partnering with Google to use their Signal Protocol technology, a “modern, open source, strong encyrption protocol for asynchronous messaging systems.” Incognito mode is not on by default, it seems, but it’s a welcome feature for those desiring more privacy.

Along with text messaging, Google also showed Duo, a video messaging service akin to Skype or FaceTime. Essentially, it’s much of the same story: a video call between two people through their phone numbers. Google claims Duo will show video in “crisp HD video” (up to 720p) and will switch between cellular and WiFi when it deems necessary. It also claims that video quality will adjust based on connection, ensuring that it’s still possible to continue the call.

Duo, the video companion to Allo, is a simple one-to-one video calling app for everyone. #io16 pic.twitter.com/cj2ZZy54QQ

The biggest differentiator between Duo and its competitors is what Google calls Knock Knock. With Knock Knock, the caller’s video stream will start before the video is accepted, meaning that the receiver is able to see the other party before picking up. Once the call is accepted, the video call will start between the two.

Without a firm launch date, Google is left with the task of providing information along the way to keep potential users interested. So far, it seems that both Allo and Duo are contenders in their respective categories; unfortunately, all we have of the apps today are the few screenshots, GIFs, and a blog post. In the coming months, it’d be nice to see a beta release from Google to get a better understanding how Allo and Duo work.