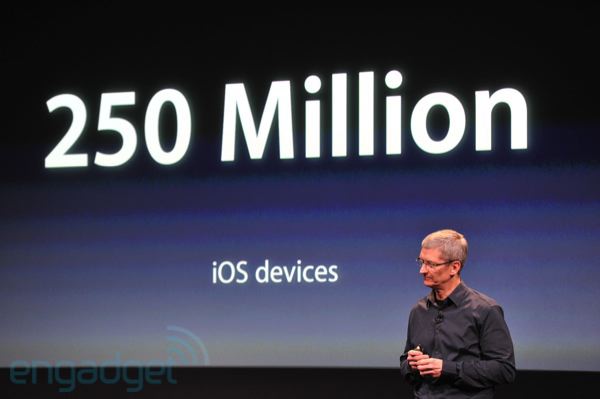 Tim Cook reported at today’s Apple keynote that iPod sales have exceeded 300 million units, with 45 million of those iPods sold since June of 2011. Also reported was that the iPhone 4 now accounts for over half of all iPhones sold.

iTunes has also seen significant growth. There are now over 20 million songs in iTunes. The number of features in the iTunes store has also increased; iTunes remains the number #1 music store worldwide and customers have downloaded over 16 billion songs.

Apple has sold over 250 million iOS devices. Tim Cook reported that 92% of Fortune 500 companies are testing and deploying the iPad. Apple’s Senior VP of iOS Software, Scott Forstall, reported over 500,000 apps are now available on the App Store, with 140,000 of them made specifically for the iPad. 18 billion apps have been downloaded so far, and over 1 billion are downloaded each month from the App Store. Apple has announced it has paid $3 billion to developers so far.