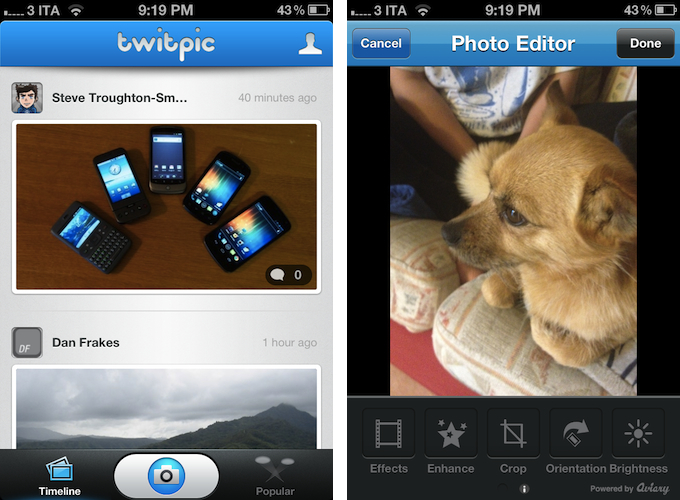 The built-in photo editor allows you to craft your perfect photo with simple editing tools and photo filters.

I have tried the app, and it is very streamlined. Because a number of Twitter apps in the past used Twitpic by default, it is likely you already have several photos uploaded to Twitpic (which automatically connects to Twitter). In accessing Twitpic with iOS’ Twitter integration, Twitpic automatically pulled old photos I used to upload to the service years ago. Photos come with captions, comments (as tweets), and views. From the Timeline view, you can check out Twitpics from the people you follow on Twitter.

The shooting process is also simple, but somewhat custom in the way Twitpic implemented camera controls on screen. An “add effects” button hidden in the upper right corner of a photo (you can take photos or videos, or import them from the Camera Roll) lets you quickly crop, rotate, or enhance an image before posting, and it’s powered by Aviary.

Twitpic for iPhone is free on the App Store. [via The Next Web]