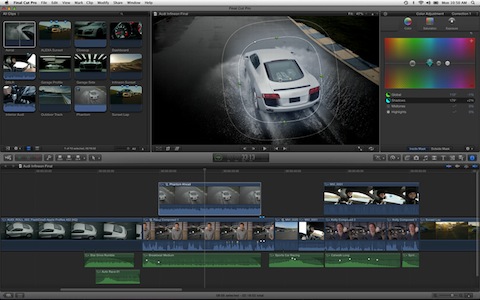 Following the much discussed backlash over the launch of the “revolutionary” Final Cut Pro X for Mac, The New York Times’ tech columnist David Pogue has compiled an interesting Q&A on the available/missing features of the application, with direct input from Apple.

The “missing features” generally fall into three categories: features that are actually there and have just been moved around, features that Apple intends to restore and features that require a third-party (non-Apple) add-on or plug-in.

Among the covered topics, Pogue reports Apple says re-enabling support for the multi-cam functionality is a “top priority” for the company.

Complaint: There’s no multicamera editing. In the old FCP, you could import the footage from various cameras that covered an event (say, a concert) from different angles simultaneously, and then easily cut back and forth between them while editing. It was a star feature of Final Cut, and it’s gone from FCP X.

Answer: Apple intends to restore this feature in an update, calling it “a top priority.” Until it does, here’s a stopgap facsimile of multicam editing: If you drag two clips into parallel timeline tracks, you can choose Clip->Synchronize Clips. By comparing their audio tracks, the program aligns the clips exactly. Now, each time you select a piece of the upper video track and press the V key (“disable”), you are effectively cutting to what’s on the lower video track.

Another feature that generated much disappointment in several Final Cut Pro X reviews on the Mac App Store is the impossibility of opening old FCP projects. Pogue confirms this:

Answer: As I noted in my column, this is true; your old projects are stranded forever in the older FCP program. You’ll have to keep both programs on your hard drive, and edit the old projects in the old program. When you install the new FCP, your old copy is safely preserved.

Read the full, technical Q&A here. In the weeks leading to the release of Final Cut Pro many professional video editors suggested it would be difficult for Apple to ship a completely rewritten version usable since day one by large studios and production houses. As Final Cut Pro X has been re-imagined from the ground up, clearly Apple needed to cut some features out of the first release, but they’ve already confirmed they’re aiming at making the update cycle for FCP faster with releases every 6 months or so.