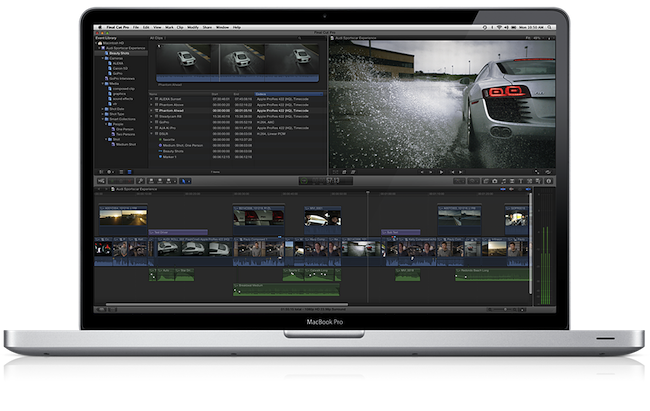 UPDATE: Final Cut Pro X is now available in the Mac App Store, as well as Motion 5 and Compressor 4.

Apple has just issued a press release noting that Final Cut Pro X will launch sometime today on the Mac App Store for a price of $299.99 with Motion 5 and Compressor 4 also out today for $49.99 each.

Apple® today announced Final Cut Pro® X, a revolutionary new version of the world’s most popular Pro video editing software which completely reinvents video editing with a Magnetic Timeline that lets you edit on a flexible, trackless canvas; Content Auto-Analysis that categorizes your content upon import by shot type, media and people; and background rendering that allows you to work without interruption. Built on a modern 64-bit architecture, Final Cut Pro X is available from the Mac® App Store™ for $299.99.

Some of the new features of Final Cut Pro X include a vastly improved video editing experience, completely rebuilt to feature a “dynamic editing interface” including what Apple dubs a ‘Magnetic Timeline’ which lets editors assemble shots simply and quickly with no unwanted black gaps in the timeline. In a similar vein clips can now be connected so that as you move one clip to a new place on the timeline, all the other connected clips (such as music or audio effects) stay synchronized with the clip. Compound Clips is another new feature that lets editors combine a group of elements (clips, audio etc) into just one clip that can easily be moved around on the timeline. 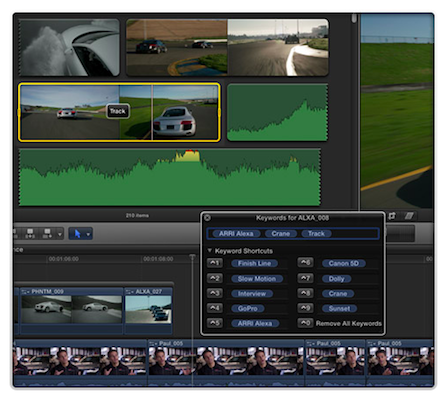 Another cornerstone feature of FCP X is vastly improved media organization, starting with support for many more formats of video. Content is now automatically analyzed with FCP X organising your footage into preset kinds of footage including whether or not there are people in the shot (and whether it is just one person or a group), whether it is a wide or closeup shot, whether the footage is stable or shaky and so on. There is also support for keywords which can be applied quickly to any piece of footage, combine this feature with the content auto-analysis and you can find the shot you need nearly instantly. Other key points of interest include ‘Smart Collections’ allowing users to organize clips without having to physically move the file and direct access to content libraries such as Aperture and iPhoto.

As had been expected, performance is also a huge area of improvement for FCP X, off the bat there is support for the 64-bit architecture and then there is resolution independence (4K footage is now supported), improved GPU utilization, background processing and a shared render engine between Final Cut Pro, Motion and Compressor. Some final points of note are that FCP X comes with a large variety of video effects, including the standard ‘Film Grain’ and ‘Cartoon’ to many others. There are also title sequences and bundled audio effects that are royalty free.

Motion 5 which is also available from today from the Mac App Store for $49.99 which is Apple’s motion graphics tool that has been redesigned, adds new templates, simplified chroma-keying and similarly takes advantage of 64-bit architectures. Compressor 4 is also available for $49.99 in the Mac App Store and has seen some modest improvements and feature additions, most notably is again support for 64-bit architectures and GPU utilization. Curiously both Motion 5 and Compressor 4 mention Blu-Ray recording - perhaps a Mac accessory could soon allow direct Blu-Ray recording, or perhaps new Mac Pros.

You can purchase Final Cut Pro X in the Mac App Store for $299.99, also available in the Mac App Store is Motion 5 for $49.99 and Compressor 4 for $49.99. FCP X requires at least 2GB of RAM (4GB is recommended), an OpenCL-capable graphics card or an Intel HD Graphics 3000 or later, 256MB of VRAM and at least 2.4GB of disk space. For a full run down of new features be sure to check out the Final Cut Pro X page on the Apple Website.

CUPERTINO, California—June 21, 2011—Apple® today announced Final Cut Pro® X, a revolutionary new version of the world’s most popular Pro video editing software which completely reinvents video editing with a Magnetic Timeline that lets you edit on a flexible, trackless canvas; Content Auto-Analysis that categorizes your content upon import by shot type, media and people; and background rendering that allows you to work without interruption. Built on a modern 64-bit architecture, Final Cut Pro X is available from the Mac® App Store™ for $299.99.

“Final Cut Pro X is the biggest advance in Pro video editing since the original Final Cut Pro,” said Philip Schiller, Apple’s senior vice president of Worldwide Product Marketing. “We have shown it to many of the world’s best Pro editors, and their jaws have dropped.”

“I’m blown away by what Apple has done with Final Cut Pro,” said Angus Wall, Academy Award-winning film editor. “Final Cut Pro X is incredibly modern and fast, but most importantly it lets you focus on telling your story in the most creative way, while it actively manages all of the technical details.”

At the heart of Final Cut Pro X is the Magnetic Timeline, a trackless approach to editing your footage that lets you add and arrange clips wherever you want them, while other clips instantly slide out of the way. You can use Clip Connections to link primary story clips to other elements like titles and sound effects, so they stay in perfect sync when you move them. You can even combine related story elements into a Compound Clip that can be edited as a single clip. The groundbreaking new Auditions feature lets you swap between a collection of clips to instantly compare alternate takes.

Content Auto-Analysis scans your media on import and tags your content with useful information. Final Cut Pro X then uses that information to dynamically organize your clips into Smart Collections, so you can easily find the clips you want by close up, medium and wide shots as well as media type and the number of people in the shot. You can also tag parts of clips with Range-based keywords to add custom search criteria to your media.

Completely rebuilt from the ground up, Final Cut Pro X is a 64-bit app that takes full advantage of the latest Mac hardware and software so you never have to wait for the next edit, even if you’re working with 4K video. Final Cut Pro X uses multi-threaded processing and the GPU on your graphics card for blazing fast background rendering and superb real-time playback performance. Additionally, a ColorSync-managed color pipeline ensures color consistency from import to output.

Final Cut Pro X also includes powerful tools for audio editing and color correction, and is complemented by two companion apps, Motion 5 for professional motion graphics and Compressor 4 for advanced media encoding, available from the Mac App Store for $49.99 each.