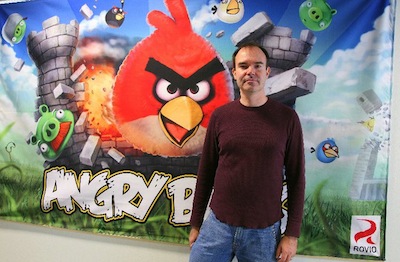 At the Game Developers Conference 2011 in San Francisco, Rovio CEO Peter Vesterbacka spoke to a large crowd about the success of his company’s franchise, Angry Birds, and the results of going from developing games for others (they used to do work for hire) to having millions of people downloading your own mobile game. Vesterbacka thanked Apple for creating the App Store model and disrupting the Soviet-like market that was imposed by carriers years ago.

We really have Apple to thank,” said Vesterbacka – not just for helping to promote Angry Birds, but for creating the App Store to begin with.

“We got away from this carrier-dominated Soviet model,” he explained – before the App Store, the carriers were responsible for figuring out what software would run on their phones. “Other people decided on our behalf what was a good game and what was a bad game,” Vesterbacka said.

As for new entries in the Angry Birds world:

You won’t have to wait too long,” said Vesterbacka – Rovio plans to release new Angry Birds games this summer.

Angry Birds Rio is set to come out on March 22, and an update to Angry Birds Seasons was released a few weeks ago. Here’s my theory: does the fact that Vesterbacka is in San Francisco and that Apple’s iPad 2 event is tomorrow sound interesting to you?