More On Cydia For Mac 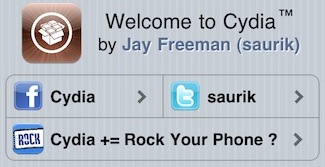 Ok, so Cydia is coming to the Mac. But what will it bring to the OS X platform, which starting January 2011 will have not one, but two ways of installing software? Just as I assumed last week, it’ll bring easy installation of mods and tweaks without having to do those things manually, through the Terminal, and keep them updated after that. The unification of desktop hacks.

True. Installing themes have been a complete mess (remember Magnifique?), not to mention those neat hacks and mods (to the Finder, for example) that magically disappear on every OS update. But there’s more:

CydiaSubstrate-based modifications can also target a particular application for modification, as well. “For instance, users that have jailbroken iPhones would like to have a modified version of iTunes that does not ask to update iOS when the device is plugged in, since the update might overwrite jailbreak modifications,” Freeman said. “Or perhaps you want to change the frequency that TimeMachine performs backups to something other than the stock settings. CydiaSubstrate makes this possible in an easy way that average users could install and update them.

This is exactly what tinkerers on OS X wanted, and needed. Cydia for Mac will simply be the iOS version brought to the desktop.

Back to the Mac.