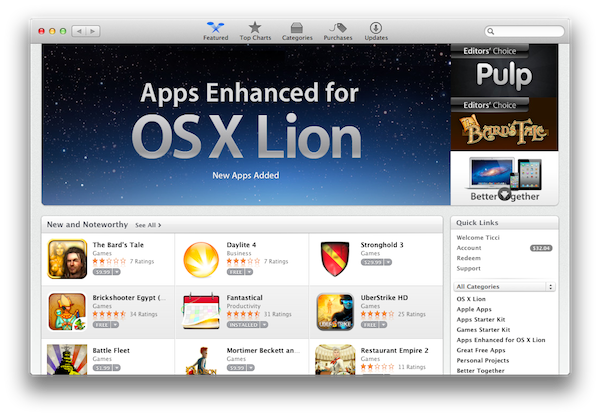 Wolf Rentzsch has published a good piece outlining the pros and cons of buying software through Apple’s Mac App Store, or directly from a developer’s website.

Some developers are going out of their way to allow seamless cross-grading from Mac App Store versions of their apps to direct apps, which is commendable and helps alleviate somewhat the situation Apple has created. Sandboxing is just the latest App Store rule change, I’m sure there’s more to come. All things being equal, it’s safer to buy directly instead of being cut off from your own software based on an arbitrary Apple policy change.

Sandboxing may be the latest requirement to get apps on the Mac App Store, but the trade-off involved with selling software through Apple’s channel has stayed the same since 2011: exposure vs. risk of change due to Apple’s policy. Because the environment is controlled and actively promoted by Apple, a developer gets all the perks of a store pre-installed on every Mac: millions of potential customers whose buying decision is just a click away, and nicely designed sections to showcase new apps (though Apple has to do more). On the other hand, because Apple gets to decide which apps and which functionalities are safe for the App Store, changes happen, like Sandboxing.

For the user, the convenience of the Mac App Store is obvious. Purchases are tied to an Apple ID, updates are easy, and the ecosystem is integrated with an existing structure (iTunes). Unlike John Gruber, I don’t think Sandboxing will be compelling for typical users, as I don’t see Apple showcasing Sandboxing-enabled apps the way they did for iCloud-enabled apps or apps updated with Lion features. It’s too technical, but Apple may figure out a way to market it (perhaps again the “Apps Enhanced for OS X Lion” section with new additions).

For developers, the Mac App Store means exposure to millions of eyeballs but also to Apple’s ever-changing strategies and technologies. The problem with Sandboxing, I believe, is that it introduced a change that is forcing developers of existing apps to reconsider functionalities that are not compatible with the Mac App Store anymore. If this will lead to serious fragmentation of Mac software with a proliferation of deeply different Mac App Store and “website versions” of the same apps, we’ll see.

Also worth reading: Lex Friedman’s story at Macworld on the first day of Sandboxing in the Mac App Store.