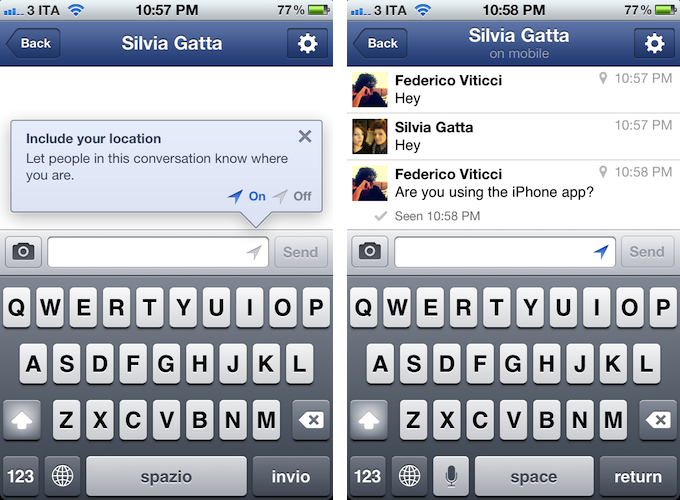 The official Facebook Messenger app for iPhone was updated today, reaching version 1.7. The new version, first reported by 9to5mac earlier this week, adds a number of optimizations and new features to the standalone messaging client, including read receipts, location information for messages, and a typing indicator.

Similarly to Apple’s iMessage, the app now displays a read receipt under each message to indicate whether the person you have written to has “seen” or ignored a message. But unlike Apple’s solution, Facebook Messenger now attaches location data to single messages as well, associating each text – with the user’s consent regulated through the standard iOS location controls – with a city or area. This, combined with read receipts and a typing indicator (that, however, did not work in our tests) should contribute to making Facebook Messenger more “personal” and “contextual” than standard SMS. To further showcase the interconnected and multi-platform nature of Facebook – which now boasts over 480 million monthly mobile users – the company is now also showing the device that generated a message within the conversation: for instance, a message sent from an iPhone will have a mobile device icon next to it.

Facebook Messenger is capable of sending messages anywhere – web, desktop, mobile – as long as the recipient has a Facebook account, although according to the company today’s updates are “mobile first”.

Facebook Messenger 1.7 is out now on the App Store.