Apple surpasses Exxon Mobil as most valuable company in the world 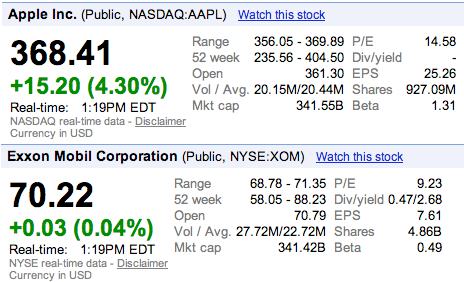 Matthew Panzarino writing for The Next Web,

Apple has, at least for the moment, taken the place of Exxon Mobil as the most valuable company in the world, measured by market cap, reports MacRumors. Apple’s market cap hit $341.55 billion in valuation today, while Exxon Mobil was valued at $341.42 billion.

Apple is having a great day, up 4% while Exxon’s growth remains stagnant. While both companies have taken hits thanks to the stock markets being down after the S&P downgrade, this is the first time Apple has been ranked as the most valuable public company in the world, even if for just a moment.

Update: Great quote from John Paczkowski at All Things D:

Incidentally, at $341.5 billion, Apple’s market cap is more than twelve times that of Dell’s $26.54 billion, which is highly ironic considering Michael Dell’s infamous suggestion for the company: “What would I do [with Apple]? I’d shut it down and give the money back to the shareholders.”

Update 2:  Mark Gongloff from the WSJ: