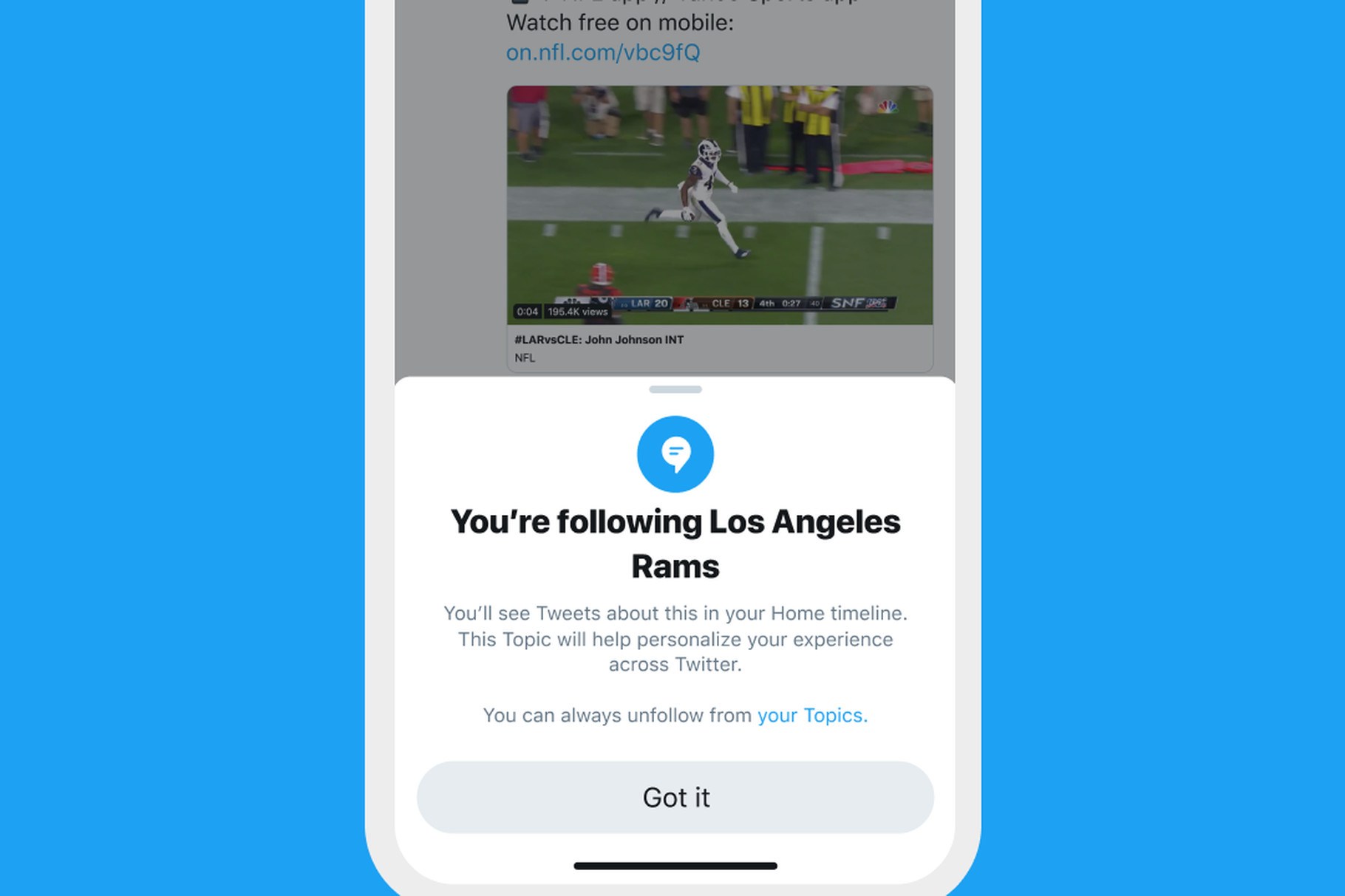 Casey Newton reports for The Verge on a new Twitter feature coming soon:

Recently, a friend told me he wanted to spend more time using Twitter, but he didn’t quite know how. His primary interest is comedy, he told me, and he hoped to find a way to see comedians’ best jokes on Twitter as they were posted. But when he followed comedians, he mostly saw a lot of self-promotion — tour dates, late-night appearances, and that sort of thing. No matter your personal interests, there are countless good and relevant tweets on Twitter. But where are they?

Topics, a new feature from Twitter that is starting to roll out this week, represents a significant effort to answer that question. You will be able to follow more than 300 “topics” across sports, entertainment, and gaming, just as you are currently able to follow individual accounts. In return, you’ll see tweets from accounts that you don’t follow that have credibility on these subjects.

Topics represent a major new addition to the Twitter timeline, easily one of the most significant changes the service has ever introduced. Though topics have the potential to improve a person’s timeline, they could also have the opposite effect if not done well. Based on this report, it sounds like Twitter’s team has all the right checks in place to ensure tweets from topics are things you’ll actually care about. Here’s Newton on how the process works:

First, Twitter scans incoming tweets for keywords like “WWE,” “pro wrestling,” and so on. (It can’t search for those terms in images and videos, at least not yet.) Second, Twitter searches to see if the tweet is from someone who normally tweets about that topic as a measure of credibility. Finally, Twitter looks at engagement: how many other people who care about this topic liked, retweeted, or replied to a tweet? The more people are interacting with the tweet, the more likely it is to make the cut.

I’m eager to try following a few topics to see whether they have a positive or negative impact on my timeline. I think the feature will be a clear win for users who are new to Twitter, and don’t already have a well-curated collection of follows; for those who have used the service for years, though, it may not be as appealing. And there’s no word on whether topics you follow will appear in your timeline in third-party clients like Tweetbot and Twitterrific.

We won’t have to wait long to find out: topics are starting to roll out this week with a full global launch next Wednesday, November 13th.